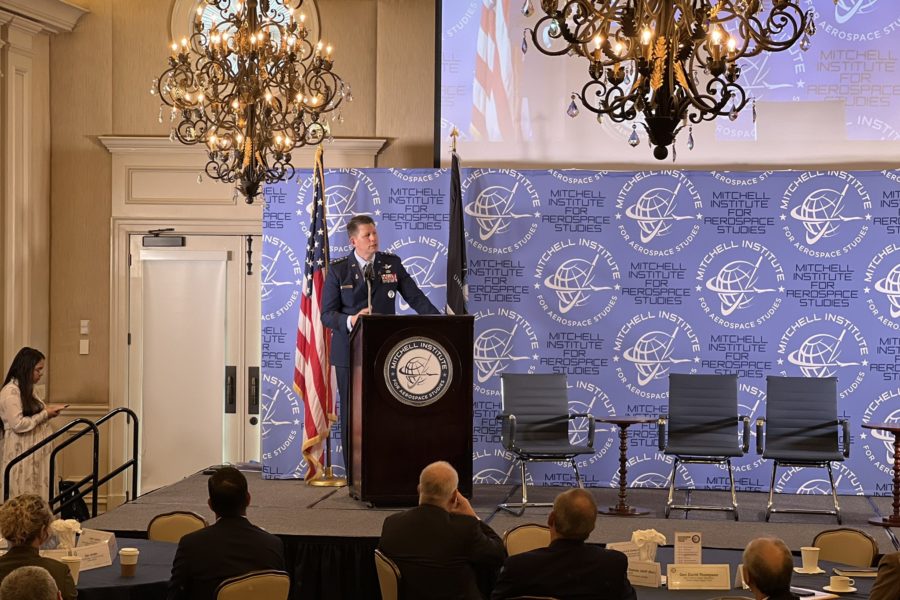 The Space Force is poised for two major changes in November, with a new Chief of Space Operations (CSO) taking on the role early in the month and the service’s component for U.S. Indo-Pacific Command standing up a few weeks later.

Vice Chief of Space Operations Gen. David D. Thompson announced the dates for both developments at the Mitchell Institute’s Spacepower Security Forum on Oct. 25. The former will mark the first change of responsibility for the Space Force’s top job, while the latter will result in the service’s first component for a combatant command outside of U.S. Space Command.

The Space Force later confirmed that the ceremony will take place Nov. 2 at Joint Base Andrews, Md. That’s in line with prior Space Force projections of a change of responsibility ceremony in early November.

Secretary of Defense Lloyd J. Austin III, Chairman of the Joint Chiefs of Staff Gen. Mark A. Milley, and Air Force Secretary Frank Kendall will all attend the ceremony.

Saltzman was first nominated to succeed Raymond as head of the Space Force in late July. He appeared before the Senate Armed Services Committee for his confirmation hearing in mid-September, stressing the need for investment in test and training technology. The full Senate confirmed him in an uncontroversial voice vote Sept. 29.

“I’m humbled and honored to be confirmed as the next Chief of Space Operations,” Saltzman said in a statement after his confirmation. “I look forward to leading the U.S. Space Force and building on the strong foundational leadership Gen. Raymond has provided for almost three years.”

“Congratulations to Chance Saltzman on his confirmation to serve as the next Chief of Space Operations,” Raymond said in a statement. “I couldn’t be more excited for the Saltzmans and for our Space Force. The team is in great hands.”

Saltzman will take on the role of CSO after previously serving as the deputy chief of space operations for operations, cyber, and nuclear, a job he first took on in August 2020. He has also commanded at the squadron, group, and wing levels in the Air Force.

Raymond, meanwhile, will retire after making history as the Space Force’s very first Guardian and Chief of Space Operations. Through the service’s first three years, Raymond oversaw numerous milestones and markers, as the Space Force stood up, defined its structures, strategies, and operational procedures, and consolidated many space-focused units and personnel from across the Pentagon.

Still more work awaits Saltzman. In the coming years, the Space Force plans to launch a new resilient constellation of satellites in low Earth orbit and build up its “lethality” and capability to respond to aggressive actions by competitors such as Russia and China. At the same time, the service must also refine and finalize its plans for essential personnel issues such as a “holistic health” program to replace traditional PT tests, and the organization of Reserve and part-time elements.

As Saltzman takes the reins from Raymond, he’ll oversee major developments in how the Space Force integrates with the Joint force, starting with the establishment of a service component within U.S. Indo-Pacific Command.

According to Thompson, Defense Secretary Lloyd J. Austin III “just recently” authorized the component’s establishment. This follows on comments from Saltzman this past May that a decision was imminent and necessary “to effectively integrate space capabilities.”

Brig. Gen. Anthony J. Mastalir was confirmed as a general officer by the Senate in May. He previously served as commander of Space Launch Delta 30 at Vandenberg Space Force Base, Calif.

While INDOPACOM will be the first earthbound combatant command to get a Space Force service component, it won’t be the only one—components for U.S. European Command and U.S. Central Command will follow “very quickly thereafter,” Thompson said.

Such moves will allow the Space Force to move beyond its work with U.S. Space Command to ensure it collaborates “closely with other combatant commanders to make sure that not only can we understand what they need in terms of space capabilities, but they truly and deeply understand the full suite of capabilities available to them in the United States Space Force, from other military services, to our IC partners, and through the commercial sector,” Thompson said.