Skip to content
Airmen recite the oath of office before transferring into the Space Force during a ceremony at the Pentagon, Sept. 15, 2020. About 300 Airmen at bases worldwide, including 22 in the audience, transferred during the ceremony. Air Force photo by Eric Dietrich.
Expand Photo 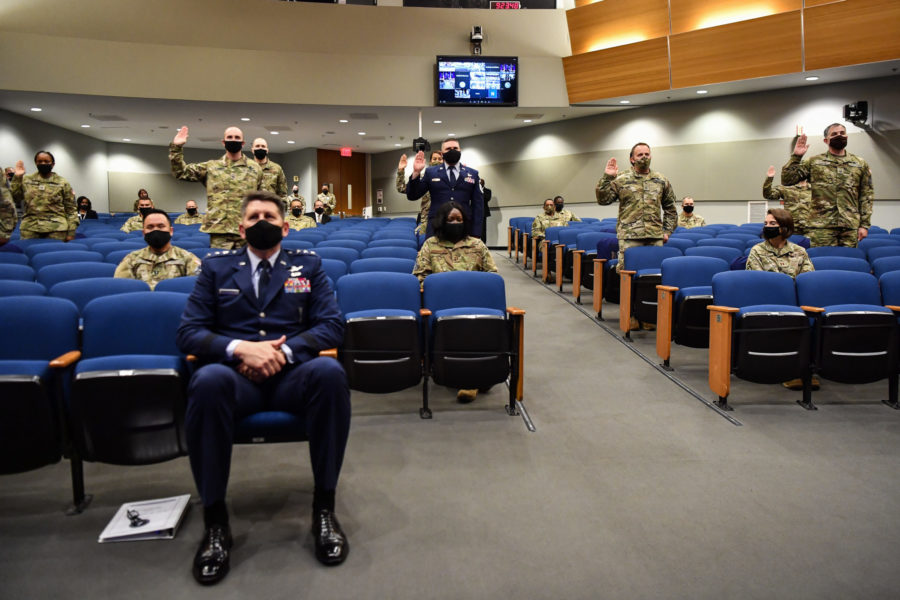 Fighting Comes Into Focus for the Space Force in 2022

The leaders of the Space Force foresee the service continuing to become more “lethal” in 2022, inventing new tactical scenarios in its third year while maturing its organizational charts and carving out roles for outside entities.

“I hope I am able to say that in Year 3, you’ll see us really putting our tires on the track and just really moving out and delivering the things that we’ve been thinking about and working on and designing,” said Space Force Lt. Gen. Nina M. Armagno.

Space Force’s director of staff at its Pentagon headquarters, Armagno summed up the service’s first two years and looked ahead to 2022 in a Potomac Officers Club webinar.

Having now stood up all three of its field commands—two in 2021—the Space Force still needs to finalize where to base the headquarters of one. That process for Space Training and Readiness Command, temporarily at Peterson Space Force Base, Colo., may be forthcoming.

Likewise, at the combatant command level, U.S. Space Command waits to find out whether it will move to Redstone Arsenal, Ala., as announced.

Meanwhile, the Space Force will double the size of its Pentagon headquarters staff, expecting to add 300 people in 2022, said Armagno.

People and satellites from the Space Force’s sister services will transfer to the new service in 2022. This second batch of transfers will turn 670 Marines, Sailors, and Soldiers into Guardians. They, and 259 civilians also transferring, will have a new orientation class to help bridge cultures. The Space Force also plans to add another 521 enlisted Guardians and about 70 officers through recruitment in 2022.

The Space Development Agency moves over in 2022 as well, from the Office of the Secretary of Defense to the Space Force. It will take along its plan for a multilayered, multifunctional constellation of relatively low-cost satellites made of readily available parts.

“I call it ‘cracking commercial’—hacking commercial,” Armagno said, referring to SDA’s role. That means figuring out how companies in the private sector “move so quickly— to capitalize on some of their innovation and inventiveness and bring it into the hands of operational warfighters sooner.”

Bringing Outside Entities Into the Fold

Partnerships now formalized with 11 universities will get off the ground in 2022. Selected in part for having Air Force ROTC detachments, the 11 also feature aerospace research programs.

On a visit to the University of Colorado Boulder to shake on the plan, Vice Chief of Space Operations Gen. David D. Thompson described the Space Force’s training and education needs. He said they’re “very, very focused and very, very high tech.”

Armagno, who attended the partnership signing at Georgia Tech, said the program is meant to benefit the Space Force on multiple levels: “world-class research, advanced education, and leadership development.”

In terms of working with companies in the private sector, Armagno said a business fair by the new Space Warfighting Analysis Center was “a recipe for success, and we’re going to repeat it.” The new center brought in companies for briefings “so that industries understood exactly what we need and why we need it.”

As evidence of growing collaboration with other countries’ militaries, Armagno offered the example of Chief of Space Operations Gen. John W. “Jay” Raymond’s “chiefs’ summit.” The summit hosted chiefs from 12 partners nations in 2020 and will grow to 22 in 2022.

Space Force’s “partnering arrangements” have delivered cost savings plus “opportunities to grow our relationships with the international community,” Armagno said. “For example, Norway is hosting a Space Force payload on one of its satellite launches, and it’s providing Arctic communications two years sooner than we could do it.”

Only a few years ago, talking about “fighting in space” wasn’t only taboo: “I can remember when ‘space superiority,’ ‘offensive and defensive operations in space,’ ‘warfighting in space’—you couldn’t even use these words. It was against policy to talk about these things,” said retired Air Force Gen. Kevin P. Chilton, a former astronaut and commander of Air Force Space Command and U.S. Strategic Command.

Now serving as the Mitchell Institute’s Explorer Chair for Space Warfighting Studies, Chilton talked about the military’s changing mindset with Space Force Lt. Gen. Chance B. Saltzman in a webinar rounding up some of the service’s accomplishments.

Saltzman suggested that provocative activities such as Russia’s debris-generating anti-satellite test in November are “a natural consequence of military behaviors.”

“When you are behind, you look for ways to seek vulnerabilities of your adversary and your competitor so that you can regain the strategic advantage, and we’re seeing that play out,” Saltzman said.

To be ready in the event that “a very bad day happens in space and the country need to recover,” Armagno said the Space Force practiced a “groundbreaking event” in June 2021—the service’s first “tactical responsive launch mission.” Space Systems Command, another of the three field commands, compressed what Armagno described as “the normal multi-month preparation timeline” for a launch “to just under three weeks.”

The exercise “demonstrated a possible rapid reconstitution capability for the nation,” Armagno said.

Armagno predicted that the service will publicly unveil a new force design for missile warning and missile tracking in 2022, “and we’ll continue to evaluate force designs for other missions.”

“From a military perspective, what’s important about norms of behavior is that we’re going to be able to tell who’s not following them,” Armagno said.