Skip to content
Lt. Gen. B. Chance Saltzman, nominee to be the next Chief of Space Operations, testifies to the Senate Armed Services Committee on Sept. 13, 2022. Screenshot
Expand Photo 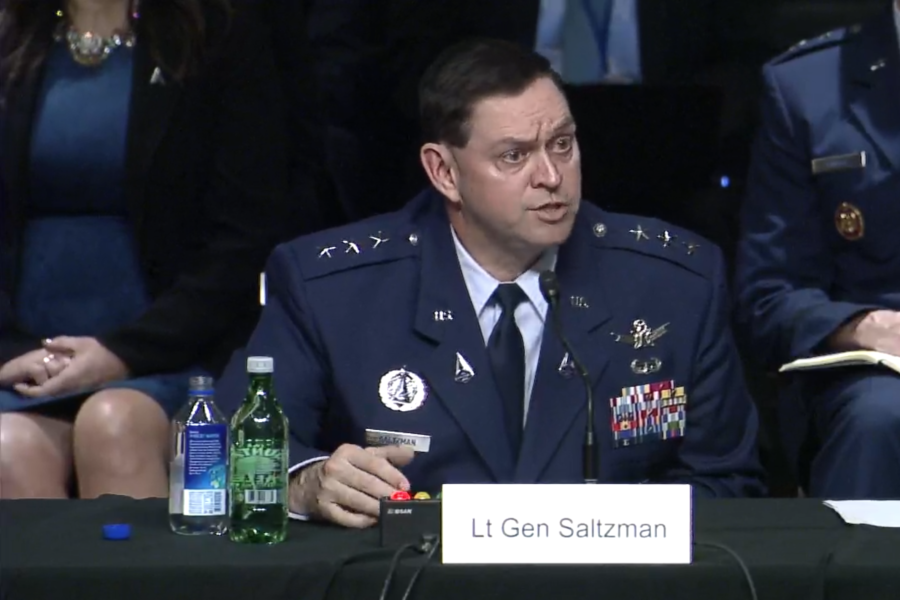 The Space Force doesn’t just need a more resilient satellite architecture, it also needs more and better ways to test and train Guardians to operate in a contested domain, the nominee to be the next chief of space operations told the Senate Armed Services Committee Sept. 13.

For months now, Space Force leaders have stressed the need for larger numbers of satellites spread across orbits, as China and Russia pursue capabilities to turn space from a relatively benign environment where the U.S. can operate freely to a warfighting domain.

Building a resilient force will require significant investment, said Lt. Gen. B. Chance Saltzman. It a nominee to be the next Chief of Space Operations.

“There [are] substantial capabilities in test and training infrastructure that we need to invest in,” Saltzman said. “If we have exquisite weapons systems, exquisite systems on orbit to provide joint capabilities, but our Guardians and our operators don’t have the skills, the training, the experience they need to make the most out of those systems, then I feel like we’re not really fully combat ready, fully ready to do those critical mission tasks.”

Saltzman, now the deputy chief of space operations for operations, cyber, and nuclear, has stressed the need for more advanced training techniques and opportunities for Guardians before. Selected over several more senior three-stars to succeed Gen. John “Jay” Raymond, he would become the Space Force’s second CSO if confirmed by the Senate.

As CSO, Saltzman would have the power and influence to direct more funds toward training and simulation under his authority to recruit, train, and equip the force. But legislators continue to express concern about the Space Force’s long-term budget plans. USSF’s Future Years Defense Plan projects growth in 2023 and 2024, but flatten and then declines in the years that follow.

Saltzman did not comment on the FYDP, noting only the need for more investments in the near-future.

“We’re continuing to build and design a more resilient, defendable architecture,” he said. “Launch prices are coming down. We’re doing distributed architectures because they’re more resilient. We’re trying to think about ways to disaggregate our payloads so they’re not as easy targets. So all of that is new investment and new force design. And so it’s going to come with a transition from our legacy capabilities to these new architectures.”

Beyond the satellites in space, Saltzman also said there is a need for greater resiliency in the Space Force’s ground stations, from which Guardians operate the satellites.

“When I look at the software, the monitoring of those networks, I think there are still some gaps that we need to fill,” Saltzman said. “When I think about space domain awareness and the number of sensors worldwide that we’re going to need in order to effectively evaluate and determine what’s on orbit and where it is and what it’s doing—and then the tools, the software tools on the ground to take all that data in and turn that data into information and decision-quality information, those are some near-term issues that I think we’re going to have to address from a software and a hardware standpoint.”

While lawmakers asked Saltzman several times about resiliency, a few also touched on the service’s ability to strike back and hold adversaries’ capabilities at risk.

Little is publicly known about the Space Force’s offensive capabilities, most of which are classified, and Saltzman acknowledged that lack of transparency can make deterrence harder.

“It’s hard to deter … an adversary, if they don’t know the capabilities there,” Saltzman told Sen. Joni Ernst (R-Iowa). “The problem is if we think too much about revealing capabilities that are vulnerable, that we might be jeopardizing those capabilities. If confirmed as the CSO, I would welcome an opportunity in a classified environment to talk about some of those trade-offs.”

Raymond has decried over-classification since becoming CSO, and pledged to develop a strategy for declassification. But the issue persists, as demonstrated when Sen. Josh Hawley (R-Mo.) asked Saltzman if the U.S. has the anti-satellite weapons it needs to deter Russia and China.

“I think the best way to answer that is, for the current conditions, I think we have suitable capabilities,” Saltzman said. “But I think the security situation is changing dynamically and I’d really appreciate the opportunity to talk with you in a classified environment on the specific details.”

Beyond the Space Force’s capabilities, Senators also asked Saltzman several times for his thoughts on how the service should organize its reserve or part-time components.

Currently, the Space Force’s proposal is for a single hybrid component of full-time and part-time Guardians called the “Space Component.”

On the other hand, a number of lawmakers and advocates have pushed to establish a new Space National Guard, saying it is needed to ensure Airmen currently performing space missions in Air National Guard units aren’t left behind.

Finally, Raymond has suggested the possibility of maintaining the status quo, with ANG units providing support for the space mission.

Saltzman, for his part, didn’t tip his hand in favor of one idea over the others.

“The key is that there are pros and cons and advantages and opportunities in each of these that are slightly different,” Saltzman. “And so what’s important is that we take the time to evaluate all of the second- and third-order effects to make sure we optimize the capabilities, optimize their long term viability, the training, the recruiting, the retention of that expertise. And if confirmed as the Chief of Space Operations, what I’d like to do is work with the committee, work with the other stakeholders to really evaluate all of those nuances to make sure we optimize the organizational structure.”