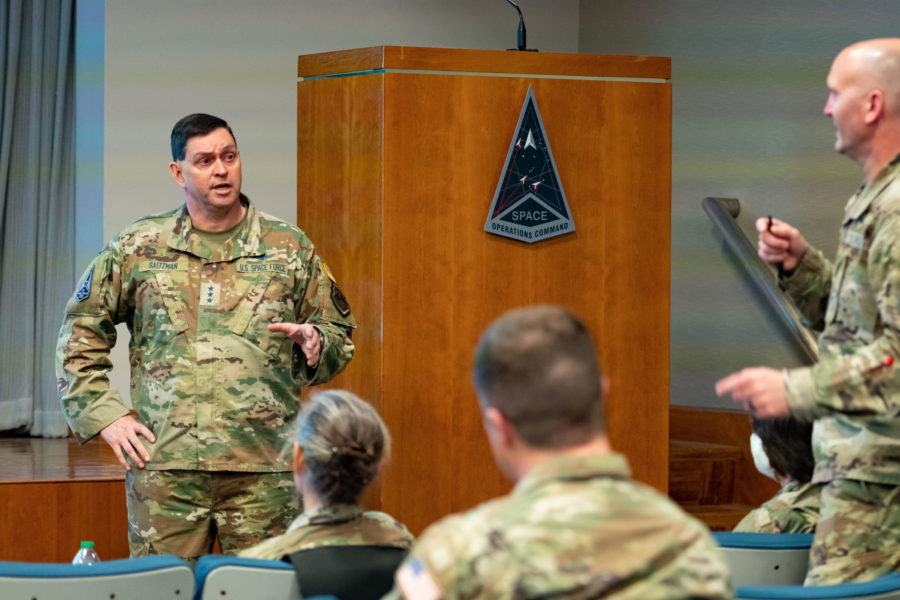 The Space Force is nearing a Secretary of Defense decision that would create a component command at U.S. Indo-Pacific Command, a move that would strengthen space integration in the combatant command responsible for defending the U.S. against threats from China, said Space Force Lt. Gen. B. Chance Saltzman, deputy chief for operations, cyber, and nuclear.

“We just think space is so critical now that we need a seat at that table,” Saltzman said at a May 19 meeting of the Defense Writers Group.

“With China being the pacing threat, it was essential that we stand up the service component at INDOPACOM,” Saltzman said. “The biggest change is going to be the combatant commander will have a subordinate commander that they can task to effectively integrate space capabilities.”

Adding “senior personnel at strength, with numbers” will help the combatant commander address space concerns such as space integration with exercises or wargames, including regional programs that involve allies and partners.

“By moving from Air Components to Space Components, Guardians in theater will be better aligned to execute their Space Force missions, roles and responsibilities,” the spokesperson said. “Presenting forces is an essential element of Joint Force and service business, and when activated, these component commands will help normalize the presentation of space forces.”

“Space is important enough now that it warrants that service-level attention,” Saltzman underscored.

Saltzman added that while the Space Force is still small and growing, it will seek to establish component commands first at those combatant commands where the threat to the U.S. homeland is most acute, namely INDOPACOM, U.S. European Command, and U.S. Central command. U.S. Cyber Command would follow.

The Space Force’s only component command to a combatant command, Space Operations Command (SpOC), stood up in October 2020 at U.S. Space Command in Colorado Springs.

“Each of those combatant commands have different thoughts when it comes to space integration, scope, and responsibilities associated with space in operations,” Saltzman said. “With the ongoing operations that were in U.S. Central Command, it was important that we stood up there. And with Russia as an acute threat, if you will, EUCOM is right there.”

The Defense Department’s fiscal 2023 budget request calls for a $2.8 billion investment in the Next Generation Interceptor with clear implications for INDOPACOM’s defense against Chinese ballistic “carrier killer” missiles and hypersonic weapons.

“The next generation of on-orbit, [infrared] abilities will be better against faster, lower-maneuvering threats,” Saltzman said in response to a question about hypersonics defense from Air Force Magazine.

“The missile warning, missile tracking in this budget was like the first one that really pivoted to put serious dollars against the proliferated constellations,” he added. “We are moving rapidly, as rapidly as the system really allows us to get it right.”

Saltzman said the Space Force plans to launch the satellites in the next three to five years.

As far as standing up the INDOPACOM service component, Saltzman said there’s “buy-in across the community that this is a good idea.” Discussions are now taking place at the Pentagon regarding resourcing, manpower, and the budget, he said.

“We don’t want to go so fast that we hang this organization out and it can’t be effective when it’s put in place,” Saltzman said. “We need to deliver planning to make sure it’s successful from Day 1, because it’s so critical.”