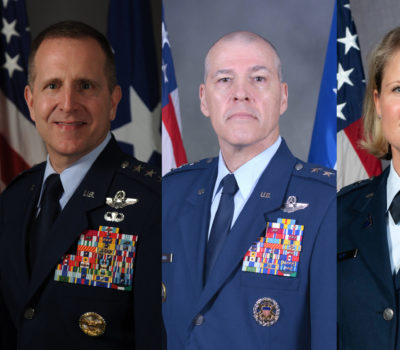 By Greg Hadley
The Senate confirmed hundreds of military nominations the evening of Nov. 30, including a new Air Force four-star, deputy chiefs in charge of operations for both the Air Force and Space Force, and dozens of general officers in the Air Force Reserve and Air National Guard. 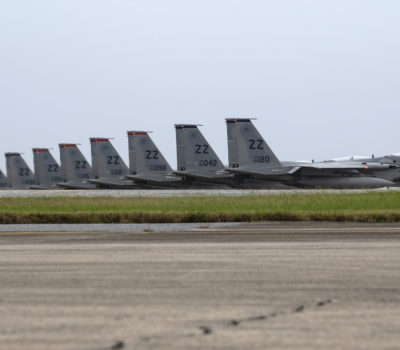 By Greg Hadley
Kadena Air Base, Japan, bid farewell to its first batch of F-15C Eagles on Dec. 1, as the Air Force began the two-year process of retiring the base's aging fighters. A press release from the 18th Wing at Kadena did not specify how many F-15s were leaving in this first reduction, but an image shared by the wing showed eight fighters preparing for a final takeoff. 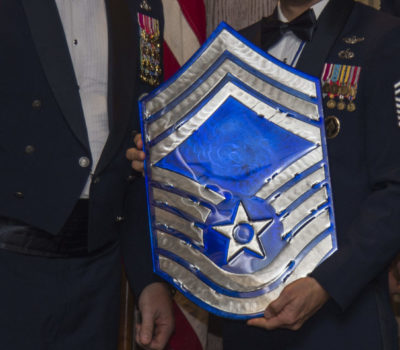 By Greg Hadley
The Air Force selected one out of every five eligible senior master sergeants for promotion to chief master sergeant, the service announced—a rate largely in line with years past, yet one that defies the larger trend of promotion rates among enlisted noncommissioned officers this year. All told, 514 senior master sergeants were tapped to move up to the service’s highest enlisted rank short of Chief Master Sergeant of the Air Force, out of 2,526 eligible, for a percentage of 20.34. 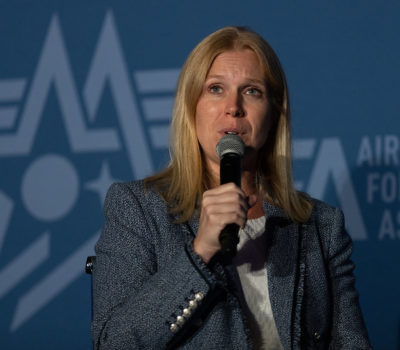 By Amanda Miller
The Department of the Air Force’s chief information officer offered glimpses into a future with “intelligent warfare” during a webinar Nov. 30 by the Mitchell Institute for Aerospace Studies. Beyond simply “informationized warfare,” with its universal digital connectivity and plentiful computing power, “intelligent warfare” goes further, as Knausenberger describes it, incorporating artificial intelligence to create a “converged battle space.” 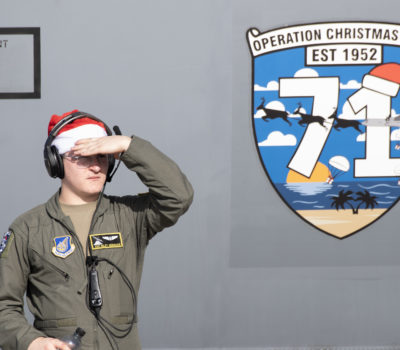 By Chris Gordon
The Air Force will begin its 71st annual Operation Christmas Drop on Dec. 4. The weeklong exercise is a yearly tradition that delivers supplies such as food, fishing equipment, school books, and clothes to remote islands in the Pacific. It is the longest-running Department of Defense humanitarian mission.

An appeals court in Ohio has upheld an injunction that protects about 10,000 unvaccinated Active-duty, Reserve, and National Guard service members in the Air Force and Space Force from being punished as they await religious exemptions from the COVID-19 vaccine. The ruling, issued by the 6th Circuit Court of Appeals in Cincinnati on Nov. 29, upheld previous wins by attorneys representing the service members over the last year and took aim at the Air Force's process of approving religious exemptions.

Recruiting Crisis? Not in the Space Force

Unlike its sister services, the Space Force has little trouble recruiting, according to the branch’s former chief. Being small helps, as does giving opportunities to some who might get rejected by another branch. The main challenge turns out to be spotting the best talent among pools of hundreds of applicants. “There's been news that there's a recruiting challenge. We haven't seen that in the Space Force,” said Gen. John W. “Jay” Raymond, who was recently relieved as the Space Force’s first Chief of Space Operations ahead of his retirement.

At the Mitchell Institute, the requirements for effective long-range strike options that bolster U.S. deterrence and global security writ large have long been a focus of study. In anticipation of the Dec. 2 reveal of the new and highly secretive B-21 stealth bomber, the institute prepared a number of resources that delve into why the nation needs a modern long-range stealth bomber.

After many delays and more than one mishap, Russia’s new-generation Su-57 Felon fighter jet is finally headed toward front-line service. The first operational—as opposed to test and evaluation—unit within the Russian Aerospace Forces to receive the new fighters will be the 23rd Fighter Aviation Regiment based at Dzyomgi near Komsomolsk-on-Amur in Russia’s Far East. But it will likely be a good while until these advanced aircraft are able to take on regular combat missions with their new operators.

Can the Air Force Train Nearly 1,500 Pilots This Year?

The Air Force aims to train about 470 new pilots in fiscal 2023, which remains a lofty goal amid an enduring shortage of flyers. Though the target is close to the service’s plan to graduate 1,500 pilots per year by 2024, hitting it will be a challenge, said Air Education and Training Command boss Lt. Gen. Brian S. Robinson during a live taping of the War on the Rocks podcast.

Russia’s invasion of Ukraine has highlighted to U.S. forces in Europe the importance of “threat-informed” exercises with allies, according to a top European Command official. Maj. Gen. Jessica Meyeraan, EUCOM’s director of exercises and assessments, said an “interesting development that occurred over the course of the last 12 to 24 months in the NATO parlance is an acknowledgment that we need to focus on a real-world threat.”

Lawmakers eager to boost security aid to Taiwan may soon authorize as much as $10 billion in new State Department financing for Taipei to buy U.S. weaponry. But it’s an open question whether appropriators will approve the actual dollars. A soon-to-be-released draft 2023 National Defense Authorization Act would authorize $2 billion in aid per year over five years and another $1 billion annually in equipment from U.S. military stockpiles.

For UAS to Operate Autonomously in Contested Airspace, Remove the Human in the Loop

In July, the Mitchell Institute for Aerospace Studies’ recently-launched Center for UAV and Autonomy Studies dove headfirst into the national debate on drones and the future of armed conflict when it brought together 40 government and industry experts to game out UAV support for deep-strike missions in a Taiwan Straits conflict scenario. The workshop examined questions that included the role of autonomy and the readiness of the technology for use in joint all-domain command and control and all-domain operations.

The Pentagon’s forthcoming Joint Warfighting Cloud Capability is expected to yield major benefits, but there will be several challenges for implementation, according to one of the department’s top IT officials. JWCC—the replacement for the Defense Department’s ill-fated JEDI program—is envisioned as a multi-cloud enterprise capability for the combatant commands and fourth estate organizations as well as other DOD components that want to leverage it. Contracts for the initiative are expected to be awarded later this month.

An F-35B Lightning II belonging to Marine Fighter Attack Squadron 121 was involved in an incident on the ground at Kadena Air Base, Japan, on Dec. 1. According to a statement released by the 1st Marine Air Wing of the U.S. Marine Corps quoted by the Japanese NHK media outlet, about 1:40 p.m. local time, the F-35B made a precautionary landing at Kadena due to possible electrical problems. The aircraft was being towed when the nose wheel broke, leaving the fifth-generation aircraft with its nose on the taxiway.

The French government said it will join the United States and several other countries in a pledge not to conduct anti-satellite (ASAT) weapons tests that can leave hazardous debris in orbit. In a statement, France’s foreign and defense ministries jointly announced that the country would not carry out destructive direct-ascent ASAT tests as a step toward a “safe, stable space environment.”

Many sports trophies end up on shelves or in glass cabinets, but the trophy that the Space Force esports team received after winning the second annual Call of Duty Endowment video game tournament achieved the ultimate high ground when it was sent on a three-hour trip above the planet’s atmosphere earlier this year. “We just thought, how cool is it that this brand-new service won its first inter-service competition, and what’s unique about this service?” said Dan Goldenberg, executive director of the Call of Duty Endowment, a nonprofit for helping veterans place into high-quality jobs.