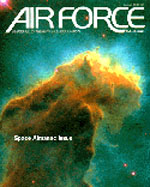 Valor: A Gift of Life

By John L. Frisbee
Over the Gulf of Tonkin, Capt. Steve Bennett made a fateful decision to save the life of his back-seater.

By John T. Correll
When our interests in space are challenged--and they will be--the nation will expect its armed forces

Facts, figures, agency and system profiles, budget data, and other information about US and international space programs.

By John A. Tirpak
This fighter is built to handle any competition for the next quarter-century.

The Views of the Force

By Otto Kreisher
Desert deployments are a big reason why the Air Force is losing some of its best people.

By James C. Kitfield
Seven years after the end of the Cold War, the questions continue about nuclear policies and strategie

From Ravens to Prowlers

In June the Air Force bid farewell to its last Raven and ushered in a new age of jointness.

By Walter J. Boyne
The North Vietnamese thought it was Dien Bien Phu all over again. They thought wrong.

By Peter Grier
Many Units Depart Persian Gulf The Air Force moved scores of aircraft, thousands of troops, and hundreds of tons of cargo out of Southwest Asia and back to the United States. The forces had deployed to the region last fall...