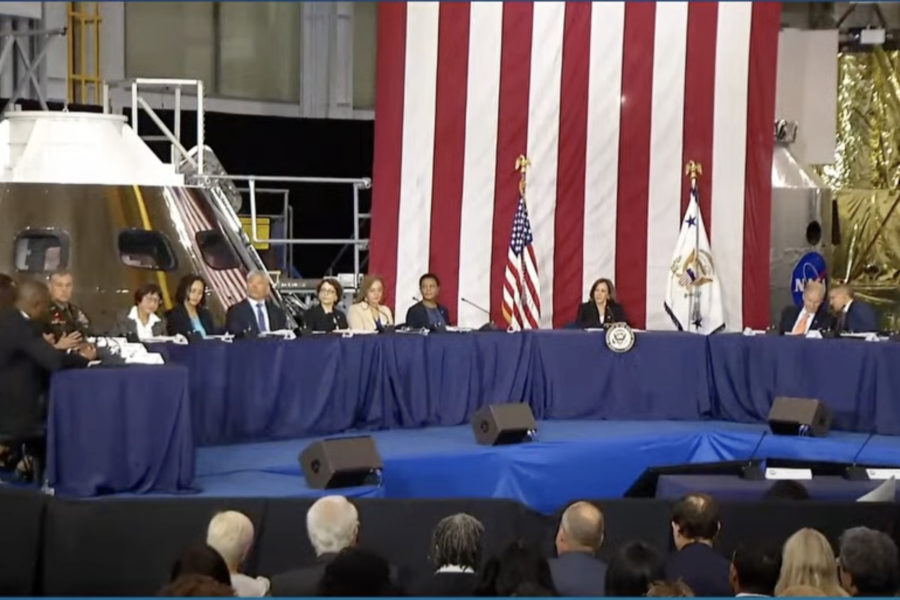 The Biden administration is proposing new actions designed to confront the proliferation of space traffic and debris as Earth orbit becomes increasingly congested and contested.

The government launched two efforts that it hopes will lead to a safer environment for the nation’s military and commercial satellites.

On Sept. 9, Vice President Kamala Harris confirmed at a meeting of the National Space Council at Johnson Space Center in Houston that the United States would not conduct direct-ascent anti-satellite (ASAT) missile tests, a commitment she first outlined in April. At the same time, the Department of Commerce and Department of Defense announced that they had signed a “memorandum of agreement” (MOA) to transfer tracking responsibilities currently provided by the military to a civilian authority. The document says space situational awareness (SSA) and space traffic management (STM) services will move to the Commerce Department. It did not specify when this would occur or what responsibilities the military would still control for U.S. national security.

The agreement is a first step in the interagency effort, and military leaders have not delved into what responsibilities will remain as part of DOD. For example, the agreement did not mention some capabilities, such as the Space Fence surveillance system operated by Space Force. But other capabilities, akin to running traffic lights on a road network rather than conducting more advanced tracking, are set to change hands.

“We need to transition to space traffic management being managed by someone other than the Department of Defense,” said Lt. Gen. John E. Shaw on Sept. 15 during a webinar hosted by the Atlantic Council. “It’s actually a wonderful thing. It’s wonderful that we, as a society and as a planet, have gotten to the point where space utilization is so great across our society that we’ve reached this tipping point.”

The groundwork for a transition to civilian management was laid out in a Space Policy Directive issued during the Trump administration.

In addition to managing space traffic, debris is a growing concern, particularly from ASATs. In November 2021, Russia destroyed one of its satellites with a missile, causing thousands of pieces of rubble to scatter in Earth’s orbit. The occupants of the International Space Station, including two Russian cosmonauts, had to shelter in their spacecraft when the ISS was put in the possible path of fragments from the blast.

“Later this month, the United States will introduce a resolution at the United Nations General Assembly to call on other nations to make the same commitment,” Harris said. ASAT tests are not prohibited by current international space treaties. A U.N. working group on “reducing space threats” began meeting this year.

The U.S. government says it will not use direct-ascent kinetic-energy weapons, which launch from Earth to destroy a target on impact, creating debris. However, the U.S. has not promised it will not develop ASATs. Satellites could also be disabled via other means, such as radio jamming, laser interference, or co-orbital satellites that collide with or somehow capture another satellite.

Harris and U.S. military leaders have pointed the finger at China and Russia for conducting hazardous ASAT tests and have said America’s unilateral commitment is unlikely to gain traction among its main foes. The U.S. has conducted ASAT missions in the past. In 2008, it destroyed what it said was a malfunctioning spy satellite with a ship-launched missile, just one year after criticizing China for an ASAT test. While debris from that Chinese launch is still in orbit, the U.S. debris had all burned up in the atmosphere just over a year and a half later, according to the Secure World Foundation’s annual Global Counterspace Capabilities Report. Commander of U.S. Space Command Army Gen. James H. Dickinson has said the debris from Russia’s 2021 test will pose a threat to satellites for “years to come.”

“It’s a commitment to not conduct destructive ASAT missile tests, which is currently the most dangerous thing to U.S. space capabilities in the form of what the Chinese and the Russians are doing,” Space Force Lt. Gen. B. Chance Saltzman, the nominee to be the next Chief of Space Operations, said at a hearing before the Senate Armed Services Committee on Sept. 13. “I am always concerned about debris. We’re committed to making sure that we lead and model responsible behaviors in space.”