Skip to content
In a Nov. 15, 2021, briefing with reporters, State Department spokesperson Ned Price blasts Russia for destroying one of its own satellites and creating a dangerous new debris field in space.
Expand Photo 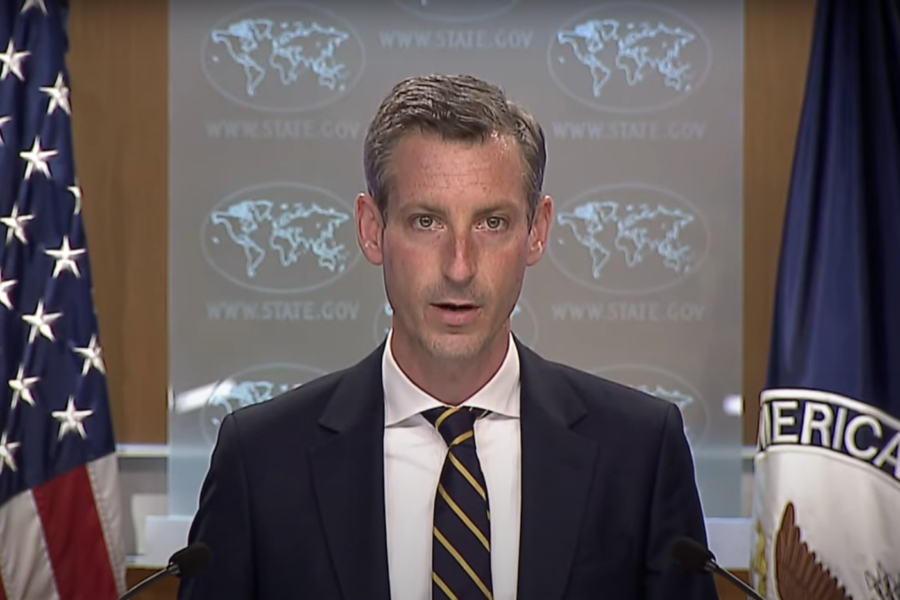 The U.S. government said Nov. 15 that a Russian anti-satellite missile test created hundreds of thousands of new pieces of orbital debris in a “dangerous, reckless, and irresponsible” act that threatens the interests of the whole world.

State Department spokesperson Ned Price confirmed reports and speculation from earlier in the day, saying in the department’s daily briefing that Russia had “recklessly conducted a destructive satellite test of a direct-ascent satellite missile against one of its own satellites.

“The test has so far generated over 1,500 pieces of trackable orbital debris and hundreds of thousands of pieces of smaller orbital debris that now threaten the interests of all nations,” Price said. “In addition, this test will significantly increase the risks to astronauts—and cosmonauts—on the International Space Station as well as to other human spaceflight activities. Russia’s dangerous and irresponsible behavior jeopardizes the long-term sustainability of outer space and clearly demonstrates that Russia’s claims of opposing the weaponization of space are disingenuous and hypocritical. The United States will work with our allies and respond to Russia’s irresponsible act.”

He estimated “trackable” pieces of debris to be “at least somewhat sizable.”

When asked about what options the U.S. might have to respond, Price said that aside from condemning the attack, he didn’t want “to get ahead of where we are,” and he mentioned that the department doesn’t always “telegraph specific measures.”

Pentagon Press Secretary John F. Kirby told reporters Nov. 15 that Russia had not notified the U.S. of the test in advance, which according to reports forced astronauts on the International Space Station to take shelter in return ships.

U.S. Space Command acknowledged in an earlier statement that it was aware of “a debris-generating event in outer space” and said it would “continue to ensure all space-faring nations have the information necessary to maneuver satellites if impacted.”

“We are also in the process of working with the interagency, including the State Department and NASA, concerning these reports and will provide an update in the near future,” according to the command.

In a later statement from the command, the debris “will remain in orbit for years and potentially for decades.”

A Nov. 15 launch window, an overhead pass of the nonworking signals intelligence satellite Cosmos-1408 within the window, the periodically coinciding orbits of the ISS and satellite, and similar periodic warnings reportedly given to the ISS crew, seemed to confirm the theory as the story developed.

Astrophysicist Jonathan McDowell of the Harvard-Smithsonian Center for Astrophysics, who is widely followed for his expertise tracking and cataloging space launches and objects in Earth orbit, predicted that the full extent of such a debris field wouldn’t be known for a long time:

“I would expect thousands of pieces of cataloged debris from a satellite the size of [Cosmos 1408] … However, it may take days to weeks for the first debris objects to be cataloged and years [for] them all to be located,” McDowell tweeted.

Only a few days earlier, the ISS crew had to maneuver out of the way of a piece of debris left over from China’s 2007 ASAT test.

The report cites “strong evidence that Russia has embarked on a set of programs since 2010 to regain many of its Cold War-era counterspace capabilities.” The report acknowledged what appeared to be a new direct-ascent ASAT program, stating that Russia “does not appear to have the capability to threaten targets beyond [low Earth orbit]”—such as medium Earth orbit, the home of GPS satellites. The report assesses Russia as “highly motivated to continue development efforts.”

U.S. Space Command declared events in 2020 to be tests of Russian ASAT systems, including a co-orbital maneuver between two satellites and another rocket launch. The U.S. also declared that a Chinese rocket launch in 2014 was an anti-satellite test, but the foundation said, “Very little information is available in the public record about this launch, other than that it occurred, remained suborbital, and does not appear to have had a clearly evident target.”

India destroyed one of its own satellites in an ASAT test in 2019. The Air Force said at the time that it was tracking about 270 pieces of debris from India’s test.

The U.S. destroyed a satellite in 1985, before many satellites were in orbit, by launching a missile from an F-15A. The report points out that today, the U.S.’s midcourse missile defenses have inherent anti-satellite capabilities—the system may even be more successful at targeting a satellite in a predictable orbit, simply by virtue of it being predictable, than one on a ballistic trajectory.

The U.N.’s resolution to address norms of space behavior by creating an open-ended working group passed its First Committee by a vote of 163-8. China, Cuba, Iran, Nicaragua, North Korea, Syria, and Venezuela joined Russia in opposing the idea.

Meanwhile, a group of experts from academia and think tanks, along with former diplomats and government officials, have signed an open letter, first published in September, calling for a limited-scope treaty to ban kinetic anti-satellite weapon tests.

Editor’s note: This story was updated at 5:14 p.m. Eastern time to include U.S. Space Command’s expectation that new debris will pose a threat for years to come.