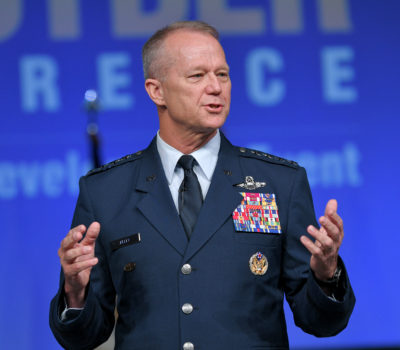 By John A. Tirpak
The U.S. has lost "conventional overmatch," and needs a sustained investment in combat air forces to restore it, Air Combat Command chief Gen. Mark Kelly said at ASC 2022. The investment is needed not just to have a quality Air Force but to ensure the U.S> has a conventional deterrent to complement its nuclear deterrent. That's eroding as China's air force gains in size and capability. 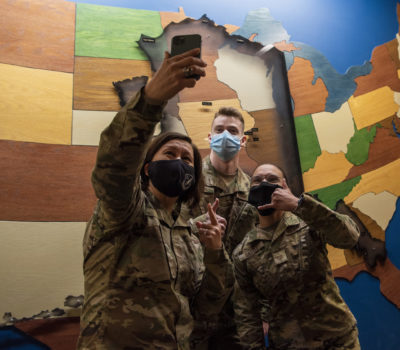 By Greg Hadley
The Air Force is poised to revamp how it does assignments, Chief Master Sergeant of the Air Force JoAnne S. Bass announced Sept. 21—including a policy allowing Airmen to swap assignments with each other. Bass detailed the changes in a keynote address at AFA’s Air, Space & Cyber conference, while also announcing the service will begin field testing digital tests for enlisted promotions and debuting a new foundational document intended to educate Airmen on the Joint Force, the “Purple Book.” 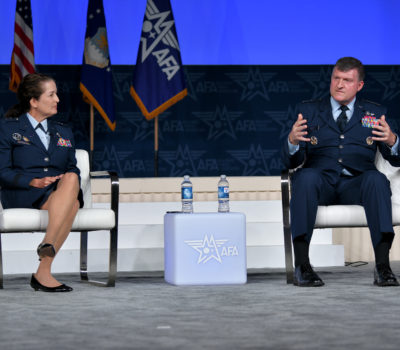 By Chris Gordon
In the closing session of AFA's Air, Space, & Cyber Conference, top generals in charge of the Air Force and Space Force future planning laid out their visions of the fundamental shifts of "space superiority" and the "democratization of air power" occurring in their domain. 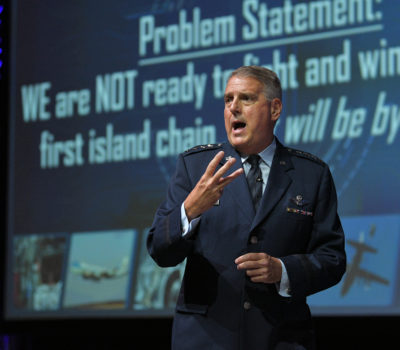 By Greg Hadley
With an ambitious goal of being ready to fight inside the Pacific’s first island chain by August 2023, Air Mobility Command boss Gen. Mike Minihan laid out what he called his “Mobility Manifesto” at AFA’s Air, Space & Cyber conference, highlighted by plans to move more boldly in the Pacific and test smaller crews on the KC-46 and other aircraft. 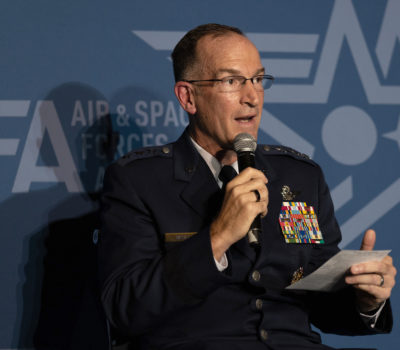 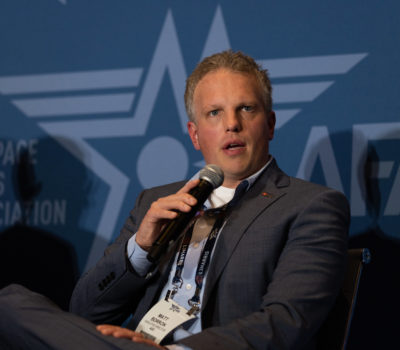 By Nick Adde
The days when military installations and the communities in which they are located kept arms’ length are long gone, Kathleen Ferguson told an audience during a Sept. 20 panel discussion at AFA’s Air, Space & Cyber Conference. “In the early 1980s, you had everything within the confines of the base. And the base really did not talk to the local community. It was highly discouraged for a spouse to work,” said Ferguson, an AFA board member who once served as principal deputy assistant secretary of the Air Force for installations, environment and energy, who moderated the discussion. “Seventy percent of our families [now] live off base, and we are looking to increase opportunities for spouses to work.”

National Guard Could Lose Up to 14,000 Troops in Next Two Years Because of COVID Vaccine Mandate

The Army National Guard is preparing to discharge up to 14,000 Soldiers in the next two years for refusing to take the coronavirus vaccine, adding increased pressure to the challenges the entire military faces with recruiting and retaining troops, service officials said. The Guard is waiting for the Army’s approval to begin separating soldiers who will not take the vaccine, which is mandated by the Defense Department, and have not applied for medical or religious waivers.

Defense officials will launch a program in 2023 to place military spouses into paid fellowship positions with corporations that can keep them employed beyond the next permanent change-of-station move. More information will be available later this year as officials continue to work out details, said Eddy Mentzer, the Defense Department’s associate director of Military Community Support Programs, at the Air & Space Forces Association’s Air, Space & Cyber Conference.

The Air Force is emphasizing digital technologies as it moves a slew of next-generation capabilities through the development pipeline, the service’s top weapons buyer said. From high-end aircraft to integrated command-and-control systems, the Air Force has its hands full as it works to place a number of new capabilities into the hands of warfighters. In the process, the service has been revising its acquisition strategies to both speed up the timeline and accommodate rapid updates, said Andrew Hunter, assistant secretary of the Air Force for acquisition, technology, and logistics.

Russian President Vladimir Putin’s decision to call up 300,000 reservists should prod the West to send the longer-range artillery and more technologically advanced weapons that Kyiv will need to press its advantage in the harsh winter months ahead, Ukraine’s deputy defense minister said Sept. 21.

The nominee to lead Space Force was recently grilled by a U.S. Senate committee about growing military threats from China and his vision for the young service that has a strong presence in Colorado Springs. If confirmed by the U.S. Senate Armed Services Committee, Lt. Gen. B. Chance Saltzman, deputy chief of space operations, would replace Gen. John "Jay" Raymond, who is retiring after 38 years in the military. Saltzman has experience in missile and space systems and as a satellite operator.

The head of the Space Force wants to build “indigenous software experts” who know how to write code as it strives towards being a digital and data-focused service. Speaking at the Air & Space Forces Association conference, Chief of Space Operations Gen. Jay W. “Jay” Raymond said the Space Force is “working really hard” to develop digitally fluent Guardians who can do more coding through programs such as Supra Coders, a three-month immersive coding school. He added that “just shy of 100” Guardians have gone through the program so far.

The Space Force is buying billion-dollar satellites that on average take seven years to develop while China is moving to build new constellations at a rapid pace. This is a problem that calls for new ways of doing business, said Frank Calvelli, assistant secretary of the Air Force for space acquisition and integration.

The Space Force is working to finalize a procurement strategy for the next national security launch services contracts expected to be awarded in 2024. A draft request for industry proposals could be issued as early as February 2023, Brig. Gen. Stephen Purdy, the Space Force’s program executive officer for assured access to space, told SpaceNews on the sidelines of the Air, Space & Cyber Conference.

Sentinel and Raider: Where These Two Legs of the Nuclear Triad Stand Today

Modernization of America’s strategic deterrence capability is continuing apace for two legs of the nuclear triad—land-based intercontinental ballistic missiles and strategic bombers. Air Force Maj. Gen. Jason Armagost is responsible for strategic planning and requirements for both: the Ground Based Strategic Deterrent (GBSD), now known as Sentinel, that will replace the Minuteman III ICBM; and the B-21 Raider that will join the B-2 and B-52 for long-range bomber strike.

The Senate Armed Services Committee has reached an agreement aimed at advancing Pentagon nominees who would oversee acquisitions and defense industrial-base policy following controversy over a road in an Alaskan mining district. Sen. Dan Sullivan, R-Alaska, blocked three Pentagon nominees from advancing out of the committee in July in protest over the Interior Department’s decision to stall his state’s Ambler Mining District industrial access road.

Watch the Battle of Britain Like You’ve Never Seen It Before—In Miniature Form The 20-minute “Battle of Britain 1.72” is a stop-motion film featuring 1:72 scale models and tiny human figurines. It was made by Jerónimo Martínez Molina of Escorpio Pictures and Entertainment in Madrid, Spain. While it may lack the widescreen sweep of the original film and is almost two hours shorter, the 1:72 version deserves recognition.