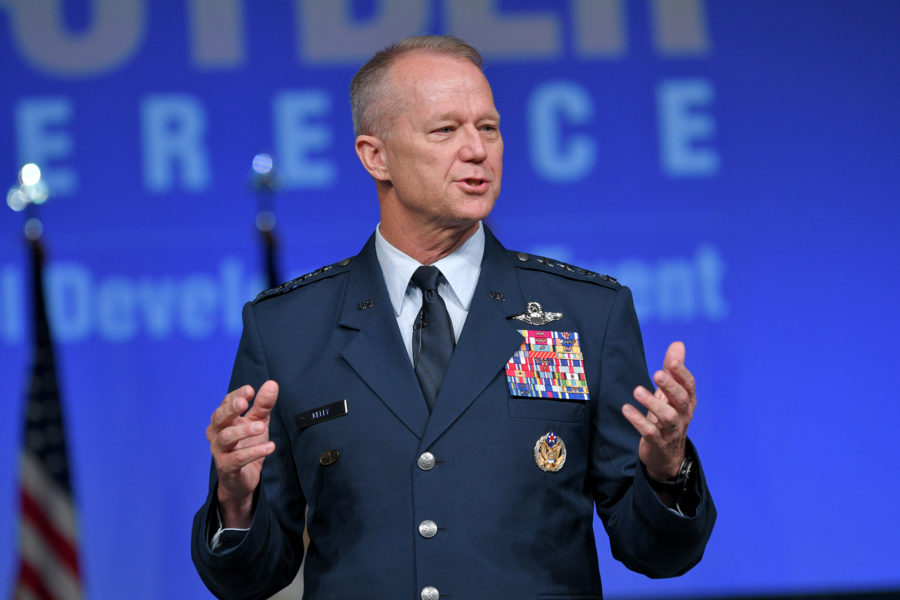 China has advanced so far and so fast in its air and space power that the Air Force’s ability to deter through conventional forces is at risk, Air Combat Command chief Gen. Mark Kelley said Sept. 21. He said the combat air forces are short 12 squadrons of multirole aircraft.

“By any measure, we have departed the era of conventional overmatch,” Kelly said in a speech at AFA’s Air, Space & Cyber Conference.

“When you have conventional overmatch, strategic risk is low. But that’s not where we’ve arrived in terms of conventional deterrence.”

The combat air forces are less than half the size they were when the U.S. prevailed quickly and with relatively few casualties in the 1991 Persian Gulf War, and the size of the combat air forces is well below where various unclassified studies have said they need to be, Kelly said. The exact numbers are highly classified, he said.

Kelly said the Air Force needs 60 fighter squadrons to meet all the responsibilities it’s carrying with regard to homeland defense, overseas contingencies, overseas presence, and crisis response, but only has 48 squadrons of what he termed “multirole” fighters. He has an additional nine squadrons of A-10s, which he called “attack” aircraft, but they lack the multirole capability that allows them to be plugged into the global force management scheme. Combatant commanders want multirole aircraft to be able to fulfill a variety of missions, which the A-10 cannot do. He lauded the A-10 community as brave and willing to go wherever they’re sent, but lacking in the capabilities needed to meet COCOM needs and prevail in air-to-air combat.

The shortages are felt mostly in Pacific Air Forces, which needs 13 squadrons but fields only 11, and in crisis response forces, which are five squadrons short of requirements, Kelly said.

There’s also an insufficient number of squadrons transitioning to new aircraft. Kelly said eight squadrons should be in that process but only three are.

“If there is an insufficient number in conversion, that either means your fighter force is getting smaller, getting older, becoming less capable, or all three,” he said.

Readiness is also taking a dive, Kelly said, with fighter pilot flying hours hovering around 9.7 hours a month, versus 22.3 just before Desert Storm.

“Some folks may surmise that I’m trying to make a case for 134-fighter squadrons or 10-year-old aircraft where pilots get over 20 hours a month,” Kelly said, and while that would be a good thing, “it completely misses the point,” which is that declining readiness of the fighter force raises the risk that an adversary will see an advantage, resulting in a failure of conventional deterrence.

Kelly ticked off a series of combat air force achievements of China’s People’s Liberation Army Air Force, which has gone from a rudimentary force to one that has nearly caught up to USAF through the rapid, “iterative” deployment of better aircraft and greater capabilities.

He also warned that there are “fourth-generation aircraft with fifth-generation capabilities,” and that it’s become too simplistic to pigeonhole aircraft into various categories. Older aircraft are carrying increasingly sophisticated sensors and weapons, he said.

Kelly also argued that there must not be a tradeoff between capacity and quality in the Air Force. He noted that Germany in World War II fielded rocket planes, jet fighters, jet bombers and rudimentary ICBMs—a truly advanced capability—yet got “completely destroyed,” because it failed to have enough air force assets.

“What I’m arguing for,” he said, is a force that will discourage any potential opponent from even contemplating a war with the U.S.

“Who wants to pick a fight with a nation that has 134 fighter squadrons” that are modernized, well-equippped and well trained, he asked. “No nation in their right mind,” he answered.

Kelly said the nation must stay on a rhythm of fielding at least 72 new fighters a year, and keep allies and partners at a comparable level of capability, because the U.S. will depend on them to provide mass.

He said the Air Force is still planning a “4+1” fighter force comprised of F-22s—which must be kept credible until the Next-Generation Air Dominance Fighter arrives, he said—the F-15E/EX family for “large munitions and payloads,” the F-35 for taking down enemy air defense systems, and the F-16 as the “capacity” airplane, with the A-10s as an attack aircraft force that will phase out circa 2030.

In a later press conference, Kelly told reporters it is too soon to think about the effect on the structure of the force that uncrewed collaborative combat aircraft will have; they will need to be put in the hands of “the captains” who will figure out the best use of such aircraft. It’s also too soon to calculate how many CCAs could be substitute for a fighter squadron, if indeed such a metric is ever applied.