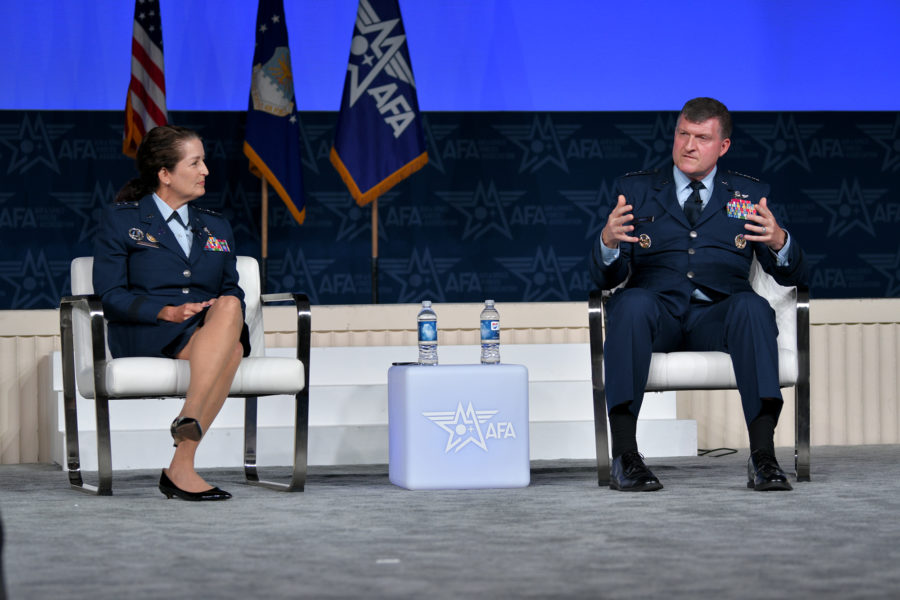 In the closing session of AFA’s Air, Space & Cyber Conference, top generals in charge of planning for the Air Force and Space Force laid out their perspectives of the fundamental shifts occurring in their domain.

Lt. Gen. Nina M. Armagno, the director of staff of the Space Force, outlined a vision of “space superiority,” offering some of the first public comments for the service to operate in an offensive capacity.

In response to Russia’s and China’s growing footprint in space and their increasing ability to threaten U.S. satellites, America must be on the front foot to counter its adversaries, she said.

So far, the Space Force has publicly defined its role as the key enabler for the U.S. joint force, and noted that the systems it operates, like GPS, allow the modern world to function as we know it. But increasingly bellicose adversaries will require deterrence.

“This isn’t just about space for space’s sake. This is about the space integrated in the all-domain fight: air, land, sea, undersea forces, plus space, plus cyber. That is the capability that the United States brings to the fight,” Armagno said. “If we lay the foundation, as we’re doing with these very capabilities that we’re putting together today, and we lay this foundation, we will be unstoppable. We will achieve space superiority. And as a nation, we’ll be able to deter attack, defend our country, when, where anytime, anyplace, against any threat that might come our way.”

“These are incredibly important things,” Hinote said. “It is not something that is military-only. We are going to see the economy of the United States grow due to the democratization of air power. Autonomous flight is going to change a lot of things. I hope that we as a country can reap the full benefit of autonomous flight.”

With the right partnership between new entities and the traditional military-industrial base, Hinote said he sees a future where the Air Force can quickly adapt to new technology while still leveraging its power to innovate.