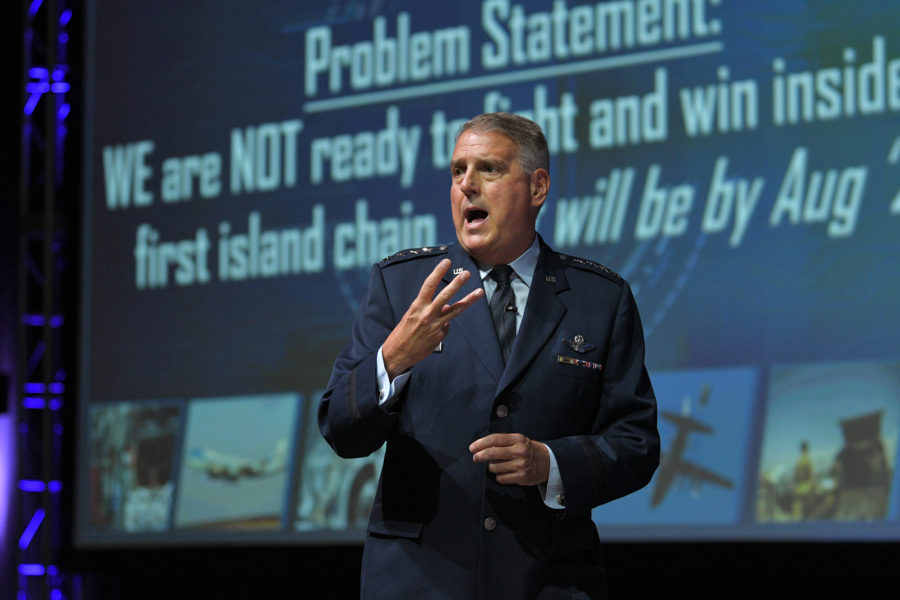 With an ambitious goal of being ready to fight inside the Pacific’s first island chain by August 2023, Air Mobility Command boss Gen. Mike Minihan laid out what he called his “Mobility Manifesto” at AFA’s Air, Space & Cyber Conference, highlighted by plans to move more boldly in the Pacific and test smaller crews on the KC-46 and other aircraft.

“AMC is the Joint Force maneuver. AMC is the meaningful maneuver,” Minihan declared Sept. 21. “There is too much water and too much distance [in the Pacific] for anyone else to do it relevantly, at pace, at speed, at scale. Everybody’s role is critical, but Air Mobility Command is the maneuver for the Joint Force. If we don’t have our act together, nobody wins.”

Minihan, who ascended to his role in October 2021, recalled that just before his promotion ceremony, Chief of Staff Gen. Charles Q. Brown Jr. urged him to “go faster,” echoing his mantra of “Accelerate Change or Lose.”

In the push to do so, Minihan noted four gaps that concerned him: command and control, navigation, maneuvering under fire, and tempo.

Seeking to address those gaps, Minihan detailed more than a dozen initiatives he’s pursuing, including the idea of removing the co-pilot from the KC-46, leaving the tanker with a crew of two—the pilot and the boom operator. Reports of such a move first came to light in July, sparking pushback from some who felt it would strain an already undermanned force.

“You’ll have to forgive me. I don’t think fighter pilots are the only ones that have a birthright to fly an airplane solo,” Minihan said. “And as much as I admire and trust that crowd, I admire and trust mine in exactly the same way.

“There’s a real operational need for it. In order to generate the tempo required to win, it’s not hard to imagine a pilot and a boom on the bunk sleeping with a pilot and a boom in seats, getting the mission done. And I’d rather test that out now than try to figure it out when the shooting is going on.”

And it’s not just the KC-46 that may eventually operate with skeleton crews. Minihan also included an objective in his manifesto to explore limited aircrew operations for other major weapons systems.

The KC-10 Extender, like the KC-46, usually has a crew of three. The KC-135 Stratotanker generally has a crew of four—two pilots, a navigator, and a boom operator. Other AMC airlifters like the C-17 and C-130J typically have two pilots and a loadmaster.

Minihan’s interest in being able to sustain a higher ops tempo and longer sorties was also reflected in his stated goal of having the KC-46 fly a 30-hour and 36-hour sortie—a Pegasus previously broke AMC’s endurance record with a 24.2-hour flight in May.

Such long flights, covering massive distances, may be needed in the Indo-Pacific region, a vast area known for its “tyranny of distance.” The Air Force and the broader Pentagon have increasingly emphasized the U.S. Indo-Pacific Command area of responsibility as part of a pivot toward competition with China, and Minihan went so far as to credit his promotion to commander of AMC to his previous experience in the region.

That focus on the Pacific will continue with Mobility Guardian 23, AMC’s “crown jewel” exercise, Minihan said. That event, scheduled for next summer, will take place “over the Pacific with the scheme of maneuver I briefed the Chief, so I can demonstrate a win,” Minihan said.

Previous versions of Mobility Guardian have been in Michigan and Wisconsin and the Pacific Northwest, but Minihan stressed the importance of AMC being able to fly and project power into the Pacific, arguing that there is “more permissive than nonpermissive” air there.

Running through a series of famous air battles in USAF history and adversaries’ capabilities, Minihan said the takeaway should be to not overestimate China’s capabilities and instead move boldly.

Starting down the list of tasks and objectives he has set, Minihan acknowledged that there is plenty of work to be done to fulfill his goal of: “We’re not ready to fight and win inside the first island chain—but we will be in a year.”

Ultimately, though, he framed it as a matter of will.