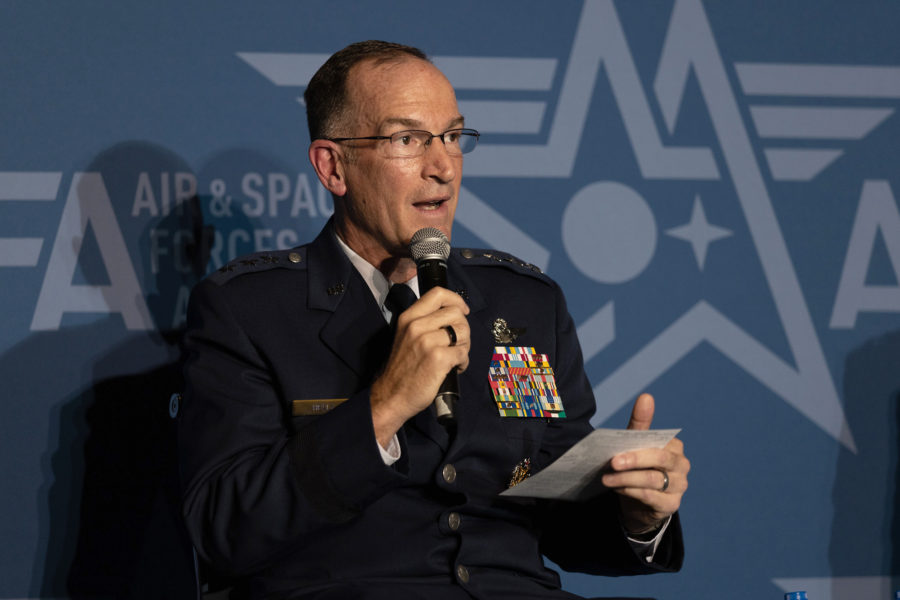 The Air Force will hit its Active-duty recruiting goals for fiscal 2022, which ends Sept. 30, but the Guard and Reserve will fall short by about 1,500 recruits each, or about 2.1 percent for the Air Force Reserve.

Q: The military services have faced well publicized difficulties in meeting their recruiting goals over the past year. How has the Air Force Reserve fared in recruitment?

Healy: Well, we’re not meeting our recruitment goal this year, either, so it’s a challenge that stretches across all components. We’re at just over 68,000 recruits this year versus our 70,300 authorized end strength. So recruiting is a challenge, one first identified by the Army a couple of years ago when their recruiters first saw a steady decline in accessions. That’s been a topic of significant discussion between myself and [Air Force Chief of Staff Gen. Charles Q. Brown Jr.], and it is a problem we’ll continue to work together in an effort to come up with creative solutions. We have to approach it from a total force perspective, because I want to ensure that when a young major leaves the Active component, his or her first choice is to pursue a continuation of service with the Air Force Reserve or Guard. And that’s been a challenge.

Q: What have you identified as the major causes of the recruiting shortfall?

Healy: One key cause is a natural attrition we saw as a result of COVID-19. Because of the pandemic, recruiters were unable to get out to the normal recruiting venues that they focused on in the past. So we are now working to get recruiters back into those venues as we increase our outreach. The numbers of individuals in the potential recruiting pool who are physically and mentally qualified has also been decreasing. We’re also having to come to terms with the mentality of a new generation, to try to figure out how to get them interested in serving in the military. That has also been a challenge.

Q: How does the mentality of that next generation of recruits differ from their predecessors?

Healy: Well, I have a 24-year-old and a 25-year-old at home, and I was unsuccessful in recruiting them! I almost convinced my 25-year-old nephew to join. So it’s a fundamental challenge to understand the mindset of this new generation. I will also tell you the pandemic shifted some fundamental norms in our society in terms of how younger people consider what they want out of their lives and careers. We’re having some trouble identifying and drawing into service those younger Americans who want to be part of something larger than themselves. I would also note that a 20-year-old today has no memory of the Sept. 11, 2001, terrorist attacks, which were a significant driver over the last couple of decades in terms of both Active-duty and reserve recruitment. That was the context that provided the answer to the question of whether I prioritize rising up the company ladder or doing something that is bigger and more important. So now we’re struggling to reach some of those people.

Q: Are there other ways the pandemic impacted reserve recruitment?

White: Yes. When it comes to drawing people into public service, in the past the U.S. military was the litmus test. After watching the amazing medical professionals and first responders who stepped up during the COVID-19 crisis, however, a lot of young people who are called to service now realize they can give back to society and make a difference in their communities without leaving. So we’re seeing some of that talent that we in the U.S. military used to capture going into fields like medicine, first responders, and teachers. As the general said, many of those young people we’re trying to attract weren’t even born on 9/11.

Q: Have the struggles of the Active-duty components in terms of recruiting rippled into the reserves?

White: Yes. In the past our recruiting models were based on 70 percent of recruits coming from the Active component and 30 percent representing non-prior-service individuals. Right now we’re not achieving that 70-30 mix. In fact, we’re probably at 60-40 and in some cases 50-50, depending on the military occupational specialty. That means we have to adjust our budgets for schools and training to qualify non-prior-service individuals to serve. We’ve never had to do that in the past.

Healy: I love those non-prior-service individuals who come in off the street to serve, but there is a significant bill involved to train them. There’s obviously a cost-benefit to recruiting an individual into the reserves who has already had a career in the military and is fully trained.

Q: Does the fact that the nation’s unemployment rate of 3.7 percent is historically low—and is considered near full employment by many economists—directly impact recruiting?

Healy: Yes, and I’ll use myself as an example. As a pilot in the Air Force Reserve, I’m on loan from an airline. When I left Active service, I joined the Reserve in order to continue serving, but also as a security blanket in case I was furloughed by the airline. Today there is a pilot shortage, with the airlines talking about a hiring spree for pilots that will last for the next 20 years. So pilots who are leaving Active duty and might have joined the reserves in the past are going right into civilian cockpits and staying there. We’re not capturing those pilots to the degree we have in the past.