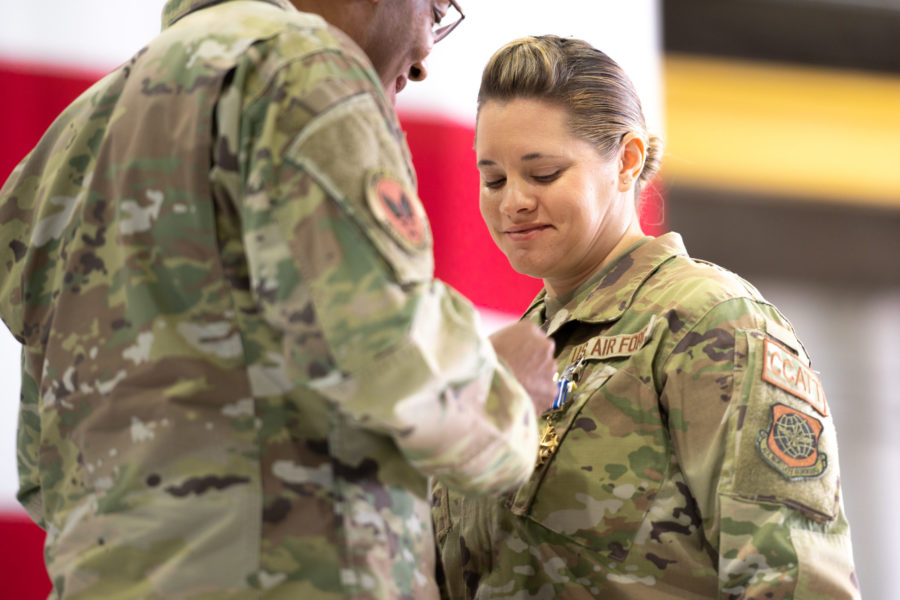 An Airman who rushed to help in the aftermath of the suicide bombing in Kabul, Afghanistan, during Operation Allies Refuge received the Distinguished Flying Cross on Nov. 17—with Air Force Chief of Staff Gen. Charles Q. Brown Jr. presenting the medal.

Brown gave the award to Tech. Sgt. Katherine Rosa Orellana at Scott Air Force Base, Ill., marking the first Distinguished Flying Cross the Brown has presented in his career, according to an Air Force press release.

Orellana, a critical care and trauma team respiratory therapist with the 375th Air Mobility Wing, is currently embedded in Barnes-Jewish Hospital in St. Louis. But in August 2021, the then-staff sergeant was deployed to Hamid Karzai International Airport as part of the noncombatant evacuation of tens of thousands of U.S., Afghan, and other partner nation civilians, as the Taliban seized control of the country.

On Aug. 26, 2021, an explosion ripped through the crowd at one of the gates of the airport, killing and injuring scores of people.

Orellana was among the first to respond to the crisis and helped to save the lives of 22 individuals, including Afghan evacuees and U.S. service members.

Over an eight-hour period, she helped evacuate five ventilated patients and expedited necessary testing for one critically injured patient while under the threat of attack, according to the service’s release.

“I joined the team a week prior and had to trust they knew what they were doing, and when we went in, we just did our jobs,” Orellana said in a statement. “And we did really well.”

A subsequent Pentagon report determined that a single suicide bomber killed 13 U.S. service members—11 Marines, one Sailor, and one Soldier—and 170 civilians. It was the deadliest attack on U.S. troops in Afghanistan since 2011. Another 45 troops were wounded.

Orellana was one of roughly 60 Air Force medical personnel assigned to the hospital at HKIA during the evacuation, who helped respond amid the chaos in the bombing’s aftermath.

The Distinguished Flying Cross is awarded for heroism or extraordinary achievement while participating in aerial flight and is the nation’s fourth-highest award for valor. Orellana’s medal was awarded with the “C” device for combat, given only when the service member “was personally exposed to hostile action or under significant risk of hostile action.”

Orellana also had the honor of receiving her award from Brown during an all-call in front of more than 1,000 Airmen—many of whom also participated in Operation Allies Refuge.

“Thanks for making my day,” Brown said, according to the Air Force release. “Many of you were involved in the largest humanitarian airlift in the world, and you should be proud.”

All told, Air Mobility Command has said it will award 96 Distinguished Flying Crosses to Airmen involved in Operation Allies Refuge, seven with the “V” device for valor and 74 with the “C” device. Another 12 Airmen will receive Bronze Star Medals.

Already, AMC has handed out awards to several crews of C-17s that flew out hundreds of civilians during the evacuation, including the crew of REACH 871, the record-breaking flight that carried 823 people to safety.

Also honored earlier this month with DFCs were Capt. Jedd Dillman, a flight nurse, and Master Sgt. Matthew Newman, a respiratory therapist. They were the first aeromedical evacuation Airmen in AMC history to receive the Distinguished Flying Cross.

Still more are soon to come. AMC commander Gen. Mike Minihan is scheduled to hand out 36 Distinguished Flying Crosses at Joint Base Charleston, S.C., on Nov. 21.