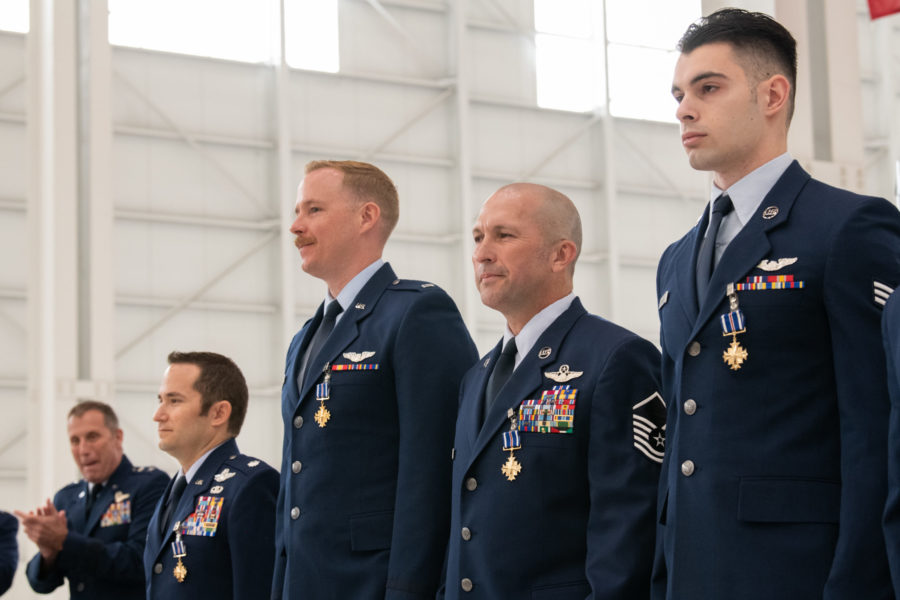 Four Airmen who crewed a C-17 during the noncombatant evacuation out of Kabul, Afghanistan, in August 2021 received the Distinguished Flying Cross, the nation’s fourth-highest award for valor in combat, on April 1.

Last summer, those four Airmen were flying on a C-17 tasked with delivering the 82nd Airborne Division to help secure Hamid Karzai International Airport in Kabul when the capital city fell to the Taliban on Aug. 15.

Faced with a dynamic environment, the mission shifted to evacuating as many people as possible. The minimally-manned crew was able to adjust in chaotic conditions. As crowds of desperate Afghans swarmed the flightline, the C-17 flew out 153 U.S. citizens, allied partners, and vulnerable Afghans, according to an Air Force release.

“The conditions that day were like none I had ever seen,” Calderon said shortly after the mission. “The airfield was breached and there were mass crowds entering the airfield. Still, the crew performed well under enormous pressure. I couldn’t be more proud of the way the entire crew operated.”

Also honored during the ceremony was Staff Sgt. Dennis Gonzales-Furman, from the 437th Aircraft Maintenance Squadron at Joint Base Charleston, S.C., who served as the aircrew’s flying crew chief during the mission in Afghanistan.

Calderon, Anderson, and Foster are the first mobility Airmen in the Reserve to receive the Distinguished Flying Cross since 2004, according to Maj. Gen. Matthew J. Burger, Air Force Reserve deputy commander. There are only 45 Reservists still serving who have been awarded the DFC.

“This is a special honor for these Airmen and the entire 349th Air Mobility Wing,” Col. Jacquelyn Marty, 349th AMW vice commander, said in a statement. “Having these three Reserve Citizen Airmen recognized for their extraordinary achievement with this medal has woven them into our enduring history.”

Foster, who served as loadmaster during the mission, called the award “the biggest honor I ever experienced,” and Anderson cited the historic nature of the award, which has been given since 1926.

“For us to receive something like this is such an honor,” Anderson said in a statement. “It was an honor to serve alongside such an experienced pilot like Maj. Calderon and a loadmaster like Master Sgt. Foster. It was paramount to our success that evening to have all that knowledge and breadth of experience onboard.”