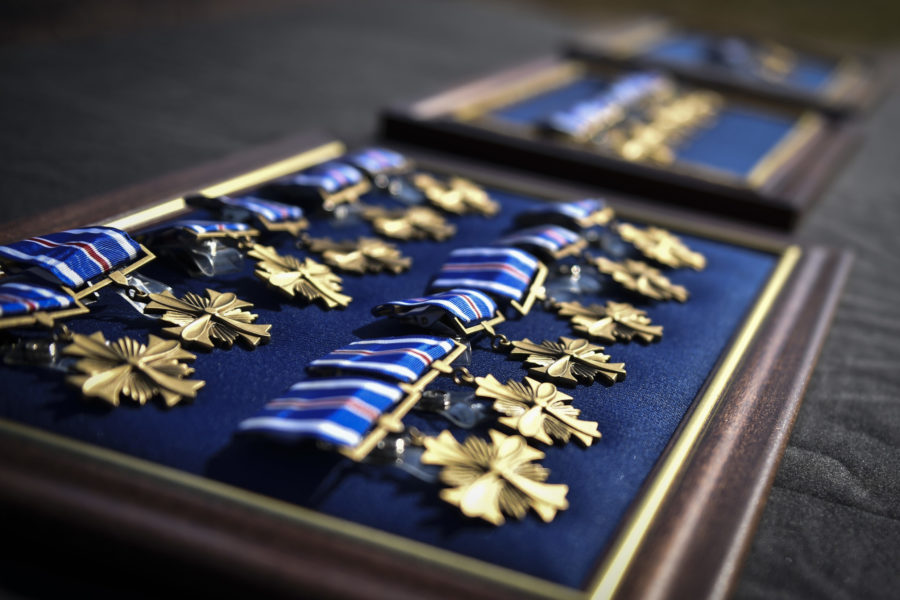 Nearly 100 Airmen will receive Distinguished Flying Crosses and a dozen more will get Bronze Star Medals for their actions in Operation Allies Refuge, the noncombatant evacuation out of Kabul, Afghanistan, in the summer of 2021 that garnered worldwide attention.

The announcement, made by Air Mobility Command on Oct. 21, marks the largest batch of medals—96 DFCs and 12 BSMs—yet approved for the operation.

AMC will release more details and citations for individual awards in the weeks to come, a spokesperson told Air & Space Forces Magazine, but a major command release specifically cited the 621st CRG for how it was able to “rapidly repair and run airfield operations at Hamid Karzai International Airport while surrounded by hostile forces.”

In August 2021, some members of the 621st Contingency Response Wing had recently returned home from Afghanistan after closing down bases across the country before they were recalled to assist with evacuating U.S. civilians and allies from Afghanistan, fleeing from the advancing Taliban.

“HKIA was the only airfield and only runway in Afghanistan at the time. So [it was] very important that we maintain that hub, that spoke, whatever you want to call it, in order to ensure that the airlock remained open to get those evacuees out of Afghanistan,” Cyrus said.

On Aug. 15, the Taliban entered Kabul, and chaotic scenes unfolded at the airport as Afghan citizens breached the airfield, with some attempting to climb on U.S. Air Force C-17s.

The 621st CRG, led by Cyrus on the ground, helped restore order and secure the airfield, and began directing air traffic with the help of other units to allow evacuations to resume.

“You need to get out there and keep that airfield open. You need to assume senior forward authority and we need to take those [aerial porters] and those Marines and make sure that they can do multi-capable ops,” Cyrus said of the mission that commanders charged his unit with. “We had aerial porters expediting aircraft, marshaling aircraft. We had the Marine air traffic controllers, obviously providing security of the ramp, at the same time landing aircraft and taking off aircraft. It was a pretty amazing thing to watch on the ground, being a leader there for the [contingency response] forces and for the operation that happened.”

Over the course of about the next two weeks, mobility Airmen helped to evacuate 124,334 people from Kabul, including U.S. citizens, Afghan nationals, and other allies and partners. Especially in the early phases of the evacuations, some Air Force aircraft faced small arms fire from the ground.

Already, the Air Force has awarded a handful of medals for the operation. An Oklahoma Air National Guard Member received the DFC in December 2021, followed by four more Airmen in April and another in June.

Those Airmen are not part of the group of 96 Distinguished Flying Cross recipients announced by AMC on Oct. 21, a spokesman clarified. The DFC, the nation’s fourth-highest award for valor in combat, is given for heroism or extraordinary achievement while participating in aerial flight.

“The world witnessed history during that airlift, borne on the shoulders of mobility heroes,” Gen. Mike Minihan, commander of AMC, said in a statement. “This recognition is long overdue for what our heroes did during those historic 17 days.”

The wait of more than a year for those awards was due in part to a backlog that required Air Forces Central, the reviewing authority, to get a waiver, AFCENT commander Lt. Gen. Alexus G. Grynkewich told reporters at AFA’s Air, Space & Cyber conference in September.

“In the process of how long AFCENT had the authorities to process awards, the authority that has been delegated to us expired, so we were at a bit of a stop,” Grynkewich said.

At the time, Grynkewich pledged to “go full court press” on processing award submissions, saying “we owe it to those service members to get those processed as quickly as we can.”

That led to a September awards board led by AFCENT. The board approved more than 350 individual awards, AMC noted in its release. And more still could come, Grynkewich said in September.

“If [the board] were to disapprove, we give feedback on why it was, which can sometimes result in resubmissions,” Grynkewich said. “The only reason I highlight that is even though my intent is to get this done very quickly, I would suspect that we’ll have some additional awards packages that come in, so resubmissions potentially in the future.”

The awards that have been announced will be officially given in the coming weeks, with Minihan scheduled to award both Distinguished Flying Crosses and Bronze Star medals at Joint Base McGuire-Dix-Lakehurst in November.