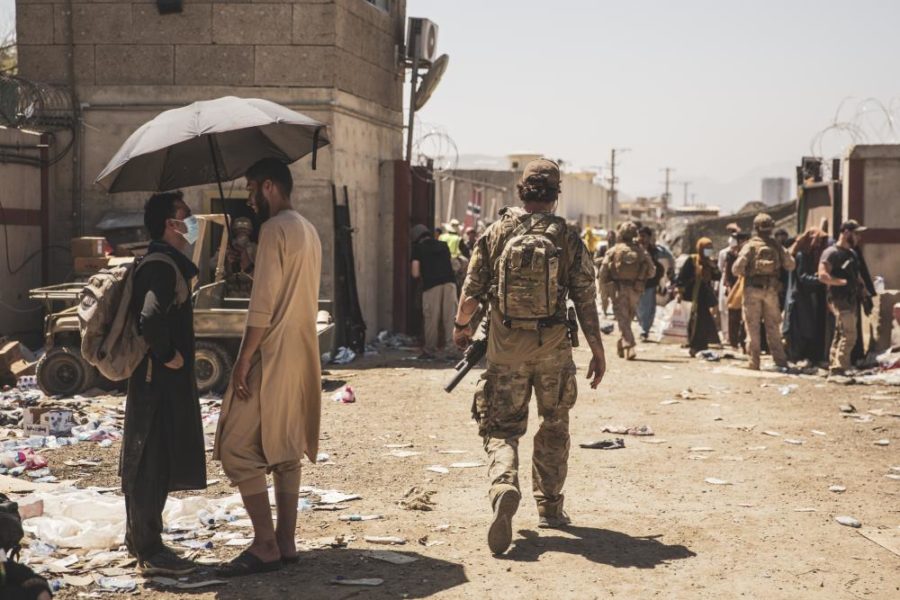 13 US Troops Killed in Kabul Airport Explosion, Deadliest Attack in Afghanistan Since 2011

Editor’s note: Pentagon officials later said in a briefing Feb. 4, 2022, that an investigation revealed the attack was conducted by a single bomber and no gunmen.

The attack, coming just days before President Joe Biden’s Aug. 31 deadline to withdraw from Afghanistan, is one of the deadliest against American troops in nearly 20 years of war. These are the first U.S. combat deaths in Afghanistan since February 2020 and the most in a single day since 2011.

In a series of tweets starting the morning of Aug. 26, Pentagon spokesman John F. Kirby first confirmed an explosion near Abbey Gate outside the airport, then a second one at the Baron Hotel, located near the Abbey Gate.

McKenzie also confirmed reports that the explosions were caused by suicide bombers, believed to be members of the Islamic State’s Khorasan branch, followed by gunfire from other fighters. ISIS later claimed responsibility for the attack.

In remarks delivered the evening of Aug. 26, Biden said he had directed military commanders to develop plans to strike back against ISIS-K’s “key assets, leadership, and facilities” in response to the attack.

“Those who carried out this attack, as well as anyone who wishes America harm, know this: We will not forgive.
We will not forget. We will hunt you down and make you pay,” Biden said. “I will defend our interests and our people with every measure at my command. Over the past few weeks … we’ve been made aware by our intelligence community, that the ISIS-K … has been planning a complex set of attacks on the United States personnel and others.”

According to a report from the BBC, at least 60 total people died in the attack, and more than 140 others were injured.

Defense and intelligence officials had warned of an attack by ISIS-K. In a press briefing Aug. 25, Secretary of State Antony J. Blinken said that there was a “very real possibility” of an attack by the terrorist group, and Biden said in a speech the same day that “every day we’re on the ground is another day that we know ISIS-K is seeking to target the airport.”

ISIS-K and the Taliban are not allied—in fact, the two groups have fought in the past. However, media reports, citing defense officials, have said ISIS-K is targeting the airport in an attempt to cause mayhem as the U.S. withdrawal reaches its final hours.

On Aug. 25, the U.S. Embassy in Kabul issued a security alert, telling Americans to avoid traveling to the airport and instructing citizens at three gates to leave immediately because of security threats. One of the three gates—Abbey Gate—is where the Aug. 26 explosions occurred.

Despite the Aug. 26 attack, though, the U.S. military will continue its evacuation efforts, McKenzie said. Since the end of July, the U.S. has evacuated 101,300 Americans, Afghans, and third-country citizens fleeing the Taliban, who seized control of the country with shocking speed in the past several months. The vast majority of evacuations—over 90,000—have taken place since Aug. 13.

There are still around 5,000 people left at the airport seeking to be evacuated, McKenzie said, as well as thousands of U.S. troops who will have to withdraw by Aug. 31 as well. Blinken also said Aug. 25 that there are hundreds of American citizens still in Afghanistan too. That leaves just a few days to complete the massive airlift operation, all while monitoring “threat streams” for additional ISIS attacks, McKenzie said.

Prior to Aug. 26, Biden had stuck firm to his commitment that the U.S. would depart Afghanistan completely by Aug. 31, though he also said he had directed the Pentagon to draw up contingency plans in case troops needed to stay longer. After the attack, he reiterated his plan to leave by Aug. 31, saying “we must complete this mission and we will.” At the same time, however, he pledged to rescue any American who wishes to leave, saying that even after troops withdraw, “we will find them and we will get them out.”

The Taliban, meanwhile, has said it will not willingly accept any American military presence after Aug. 31.

Even before the two bombings, the security situation at the airport, which is located just a few miles from Kabul’s city center, had been tense, with instances of violence and chaos since the evacuation mission began.

On Aug. 16, hundreds of Afghans breached the airfield and swarmed U.S. Air Force planes. In one instance, a C-17 took off with Afghans clinging to the outside of the plane, and at least one person then fell to their death. On Aug. 23, there was a brief firefight outside the airport when an unidentified shooter opened fire, killing an Afghan soldier, before U.S. troops returned fire. There have also been numerous reports of the Taliban establishing checkpoints outside the airport, stopping Afghans attempting to flee the country and even beating them.

Editor’s Note: This story was last updated at 6 p.m. on Aug. 26 with new information from the White House.