Skip to content
A still image from drone video footage of the aftermath of a suicide bombing outside Hamid Karzai International Airport in Kabul, Afghanistan, Aug. 26 2021. Officers presented the footage in a Pentagon briefing Feb. 2022. Screenshot photo.
Expand Photo 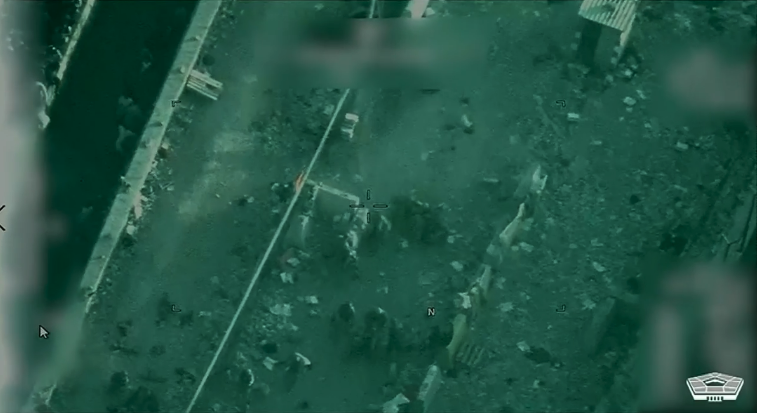 A single suicide bomber killed 13 American service members and 170 Afghan civilians during the August 2021 evacuation from Afghanistan, contrary to the Pentagon’s initial report that described a “complex” attack, according to senior military leaders following the completion of an investigation.

After interviewing more than 100 witnesses and receiving reports of examinations of all the bodies, investigators found that all those who died in the August 2021 suicide bombing at the Abbey Gate leading into Hamid Karzai International Airport in Kabul, Afghanistan, had died from a bomb “explosively directing ball bearings through a packed crowd and into our men and women,” Commander of U.S. Central Command Gen. Kenneth F. McKenzie Jr. said during a Feb. 4 Pentagon briefing. The troops wore body armor and helmets, but those couldn’t stop “catastrophic injuries to areas not covered,” he added.

The ball bearings made wounds that looked like gunshot wounds, “and combined with a small number of warning shots [by U.K. and U.S. troops], that led many to assume that a complex attack”—one involving both the bomber and gunmen—“had occurred,” McKenzie said.

Officers who took part in the briefing cited accounts by Marines—disoriented from the blast and from leaks caused when the blast punctured their own tear gas canisters—as contributing to the confusion about what really happened.

However, others were in a better position to see what happened, “especially those witnesses in observation towers, both American and British, who were in locations unaffected by the blast and that had commanding views of the scene before, during, and after the explosive attack,” McKenzie said.

The troops in the towers saw no ISIS shooters, and neither did analysts of drone footage trained on the area 3 minutes, 8 seconds after the explosion.

Military officers involved in the withdrawal mission corrected the record in a Pentagon briefing late Friday.

The day after the attack, McKenzie had said “two suicide bombers, assessed to have been ISIS fighters, detonated near the gate.” He was referring to the now-confirmed bombing and one thought to have exploded near a building that sheltered British evacuees. The initial attack “was followed by a number of ISIS gunmen who opened fire on civilian and military forces,” McKenzie said at the time.

But after an investigation, he and others now say a single suicide bomber killed 170 people in the crowd along with a U.S. Sailor, a Soldier, and 11 Marines who were screening the evacuees.

The crowd being so tightly packed, along with the bomb’s “disturbing lethality,” McKenzie said, added up to so many deaths.

DOD leaders have also recanted their story, in the months following the evacuation, of the mistaken drone strike that killed 10 innocent civilians, including seven children, at a home in Kabul three days after the bombing.

The officials first said they had targeted “a vehicle known to be an imminent ISIS-K threat,” referring to the ISIS-Khorasan branch. Then Chairman of the Joint Chiefs of Staff Army Gen. Mark A. Milley said three days later that he believed the strike was “righteous.”

But media outlets reported otherwise, and DOD leaders eventually admitted that the military had made a series of wrong assumptions and targeted an innocent aid worker.