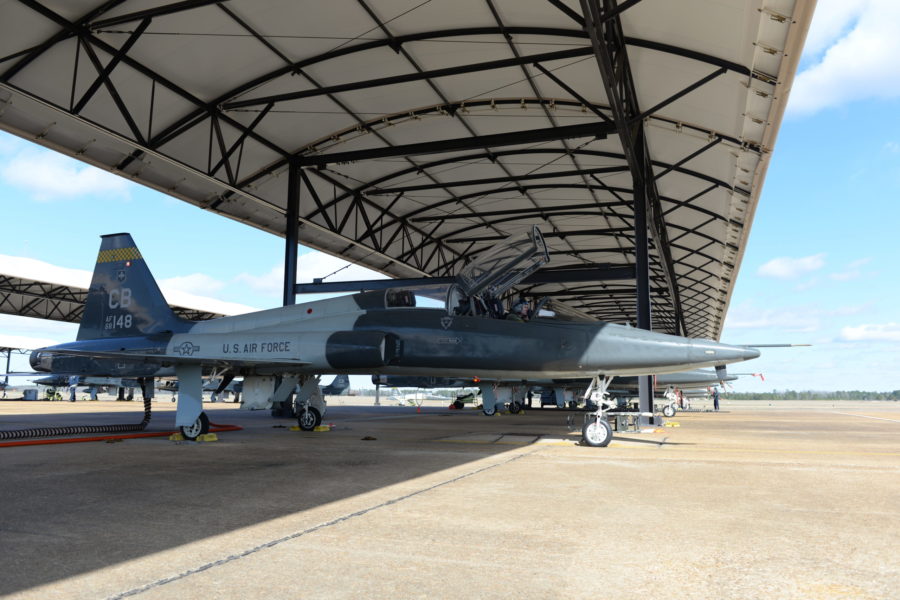 Editor’s note: This story was updated Nov. 23 to clarify the location of the February 2021 crash.

Less than two weeks after a T-38 trainer aircraft crashed near Columbus Air Force Base, Miss., another experienced an in-flight emergency that ended with the pilot executing a gear-up landing Nov. 18.

The pilot landed the aircraft, a T-38C, successfully and was OK, a base spokesperson said in a press release.

The exact cause of the incident is still being investigated, but the emergency was first reported about 10:45 a.m. local time and involved a malfunction with the landing gear, the press release stated.

While the incident did not leave anyone injured, it does mark another emergency for the T-38 fleet at Columbus. On Nov. 7, a T-38A pilot was forced to eject after an in-flight emergency. That aircraft crashed.

And in February 2021, two pilots—a USAF instructor pilot assigned to the 50th Flying Training Squadron at Columbus and a Japan Air Self-Defense Force student pilot—died in a T-38 crash at Dannelly Field near Montgomery, Ala. The crash was later attributed to spatial disorientation.

Other T-38 crashes and incidents in the last few years have occurred at other bases. One pilot died and two more were injured in a November 2021 incident involving two T-38s at Laughlin Air Force Base, Texas. In February 2021, a T-38 at Beale Air Force Base, Calif., also had to execute a gear-up landing.

Gear-up, or “belly,” landings are rare but do occur. An A-10 pilot was forced to execute one in April 2020, and this past January, a South Korean F-35 pilot had to perform one.

The supersonic T-38, built by Northrop, entered service in 1960 and has been modified a number of times to restore its structural strength and improve its training capabilities. The Air Force is developing the Boeing T-7A to take its place, but the T-38 fleet is not expected to be fully retired until about 2030.

The Air Force uses the T-38 for advanced undergraduate pilot training for pilots headed to fighters and bombers, as a companion trainer for some aircraft, and as a graduate-level fighter training platform. The type is also used as an “aggressor” aircraft to provide sparring partners for some USAF fighters.