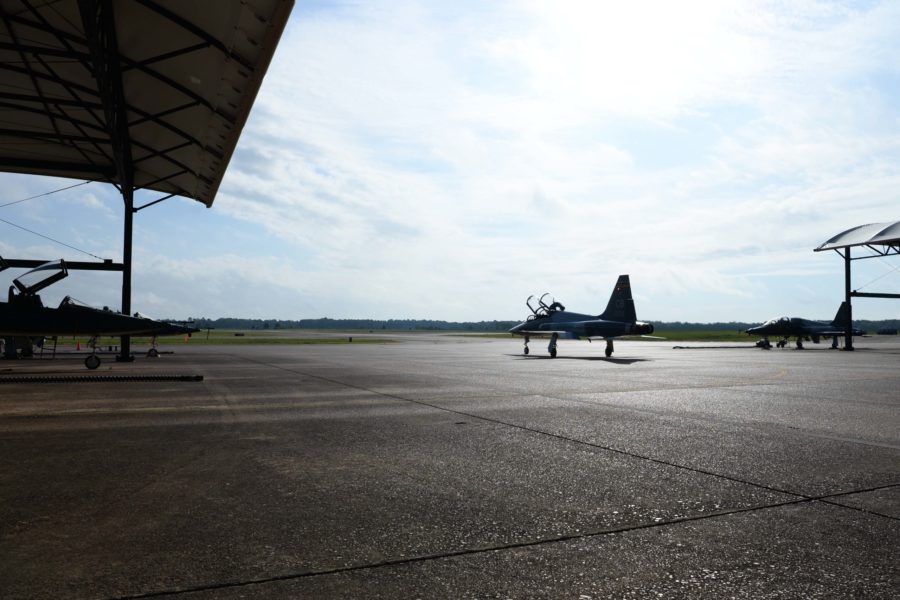 A T-38A Talon jet trainer of the 14th Flying Training Wing crashed near its home of Columbus Air Force Base, Miss., about 2:30 p.m. local time Nov. 7. The pilot ejected and survived, a base spokesperson said. No one on the ground was hurt.

The T-38 experienced “an in-flight emergency” and went down approximately 20 miles from the base, according to a press release, but details of the mishap will await the results of an investigation now underway. The pilot, whose name was withheld pending further inquiry, was taken to a hospital for evaluation.

Only one pilot was flying the two-seat, supersonic aircraft.

“We’re thankful the pilot ejected safely, and we appreciate the continued support of the Columbus community and our community partners,” the 14th’s vice commander Col. Jeremy Bergin said in a press statement.

“We continuously train our pilots to react appropriately for all emergency situations such as the incident that occurred today,” Bergin said.

Two pilots—a USAF instructor pilot and Japan Air Self-Defense Force student pilot—died in a T-38 crash at Dannelly Field near Montgomery, Ala., in February 2021—the crash was later attributed to spatial disorientation. A day earlier, a T-38 crashed at Beale Air Force Base, Calif., due to a landing gear malfunction, which did not claim the life of the pilot. T-38 crashes over the past five years have chiefly been attributed to pilot error.

The supersonic T-38, built by Northrop, entered service in 1960 and has been modified a number of times to restore its structural strength and improve its training capabilities. The Air Force is developing the Boeing T-7A to take its place, but the T-38 fleet is not expected to be fully retired until about 2030. The Air Force uses the T-38 for advanced undergraduate pilot training for pilots headed to fighters and bombers, as a companion trainer for some aircraft, and as a graduate-level fighter training platform. The type is also used as an “aggressor” aircraft to provide sparring partners for some USAF fighters. More than 1,100 T-38s were built and have served the Air Force, Navy, NASA, and foreign operators.