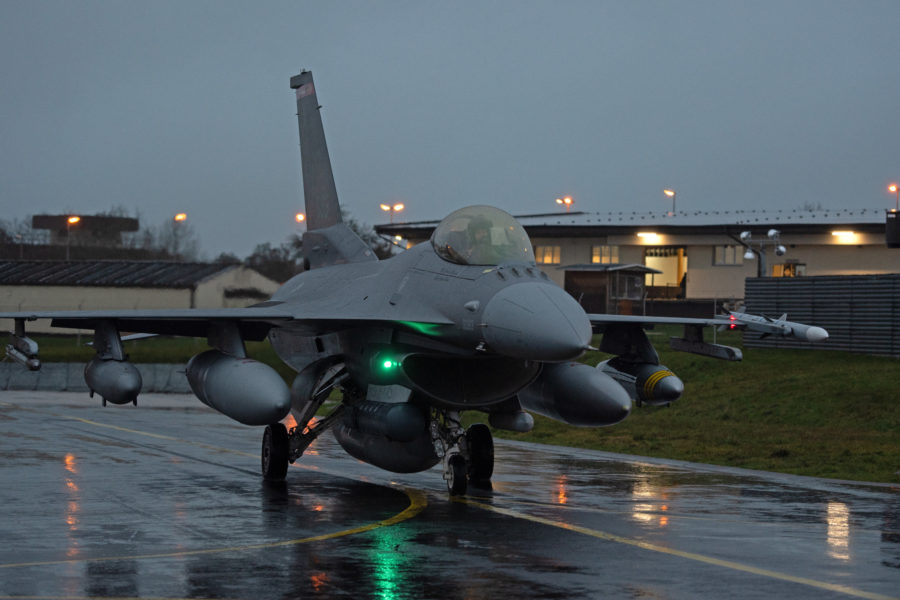 Spangdahlem F-16s Deploy to Kadena; Permanent Replacement for F-15s Will Be ‘Superior’

The Air Force has deployed F-16CMs from Spangdahlem Air Base, Germany, to Kadena Air Base, Japan, to substitute for F-15C/Ds headed stateside for eventual retirement, the service said Jan. 16.

While at Kadena, the F-16s will be flying alongside some remaining F-15s, as well as F-22s which deployed there from Joint Base Elmendorf-Richardson, Alaska, shortly after the F-15 retirement plans were announced in October.

A permanent replacement for the F-15s still hasn’t been determined, but the fighters will eventually be succeeded by a “superior” system, the Air Force told Air & Space Forces Magazine—that could mean F-15EXs, the widely expected choice, F-22s, F-35s, or the Next-Generation Air Dominance system (NGAD).

Air & Space Forces Magazine first reported the F-15s would be replaced, at least temporarily, by F-16s from Spangdahlem in November. The departure of F-15s from Kadena, the last such jets in the Active-Duty force, will take two years as part of a “phased withdrawal.”

“A decision has not been made on a permanent replacement at this time,” a Kadena spokesperson said. But “all proposals under consideration include advanced capabilities that are superior to the F-15C/D.”

Until a final choice is made, fighter requirements at Kadena will be met using “the Global Force Management process to provide backfill solutions that maintain regional deterrence and bolster our ability to uphold our treaty obligations with Japan,” the spokesperson said.

The GFM supplies capabilities from across the Joint force to meet theater commander needs. However, the Air Force has said that it will find the needed fighters from within its own units and not relying on Navy or Marine Corps aircraft.

Located on the Japanese island of Okinawa, Kadena is the closest U.S. air base to Taiwan, which has been threatened by Chinese air exercises in recent months. The announcement of the F-15 withdrawal from Kadena raised the ire of a number of lawmakers, who said the move is reducing U.S. air capability in the area at a critical time.

Before the withdrawal began, Kadena fielded 48 F-15C/Ds in the 44th and 67th fighter squadrons. The current complement of all types now operating at Kadena is being withheld for security reasons, a USAF spokesperson said.

The F-16s going to Kadena are from the 52nd Fighter Wing and include aircraft with the “Have Glass” modification which improves their stealthiness through special paint and other features. The aircraft are F-16CMs, which are Block 40-42 or Block 50-52 aircraft that have received the Common Configuration Implementation Program (CCIP) upgrade, which includes helmet-mounted targeting systems and Link 16 connectivity, among other enhancements.

The F-22s at Kadena are from the 525th Fighter Squadron of the 3rd Wing at Elmendorf. The Air Force has not said how many Raptors deployed or how long they will stay. Together, the F-22s and F-16s comprise the 480th Expeditionary Fighter Squadron. 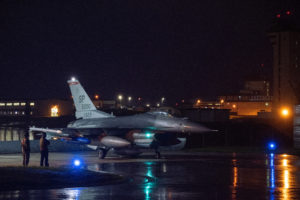 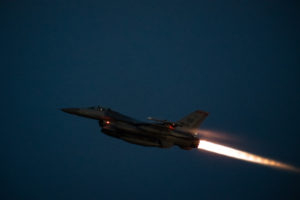 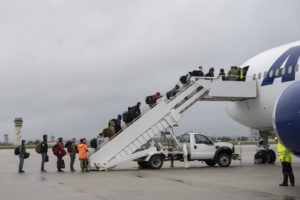 U.S. Air Force Airmen assigned to the 52nd Fighter Wing board a Boeing 767-300ER on Spangdahlem Air Base, Germany, Jan. 12, 2023, as part of a deployment to Kadena Air Base, Japan. U.S. Air Force photo by Senior Airman Marcus Hardy-Bannerman 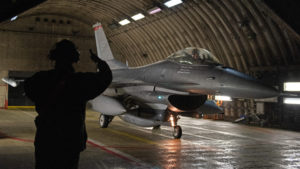 Some F-15s leaving Kadena will be shifted to Fresno Air National Guard Base, Calif., where they will join the 144th Fighter Wing of the California ANG after an extensive inspection. At least two F-15s from Kadena, still wearing their “ZZ” tailcodes, have have joined the 144th. They are among those aircraft that received replacement longerons and other key structural members in the wake of a 2007 accident, in which an Air Guard F-15C broke in half during a routine air combat maneuvering mission over Missouri. Other Kadena Eagles are expected to join other Guard units. A press release from the 144th said the unit expects to get more F-15s from Kadena.

That accident was caused by a failure of a longeron, a life-of-the-aircraft part that provides structural strength for the front half of the fighter. The aircraft involved had flown longer than the Air Force expected to keep the F-15 in service, and the longeron was not an item that received routine inspections at that point. The accident grounded the Air Force’s entire F-15 fleet for nearly six months as inspections and modifications were carried out on the fleet.

The F-22 was supposed to fully replace the F-15C/D, but the Raptor’s production termination in 2010 forced the Air Force to extend the F-15’s service life. In recent years, the Air Force has said it can no longer economically extend the F-15, and it is in the process of retiring the F-15C/D and buying F-15EX Eagle IIs to replace some 80 of them.

“While deployed here, the highly maneuverable, multirole F-16s will work in conjunction with Kadena-based assets” and the F-22s from Elmendorf, “to ensure continued steady-state fighter capabilities,” a Kadena press release said.

“Together, the diverse array of fighters, alongside joint and allied forces, strengthen operational readiness to defend Japan while ensuring a free and open Indo-Pacific through a robust presence of dynamic fighter aircraft,” it said.

The F-22 itself is slated for retirement in about a decade—not because of structural limits but because its stealth capabilities will not be up to penetrating adversary air defenses by that point. Its planned successor is the NGAD.

Lt. Col. Shaun Loomis, 480th commander, said his Airmen are looking forward to “training and operating in this uniquely complex and strategically vital region. Additionally, we are grateful for the opportunity to experience day-to-day life and local culture here in Okinawa.”

The need to pull F-16s from Spangdahlem—at a time when Russian forces are engaged in air combat in nearby Ukraine—is a “symptom” that the Air Force has been underfunded too long to maintain adequate forces, retired Lt. Gen. David Deptula, head of the Mitchell Institute for Aerospace Studies, said in November.

The Air Force has not been “adequately funded to recapitalize its forces in a timely fashion,” he said in an interview. The service will increasingly find it doesn’t have “the forces available to be forward” and “unable to contribute its portion of what’s required by our National Security and Defense strategies.”