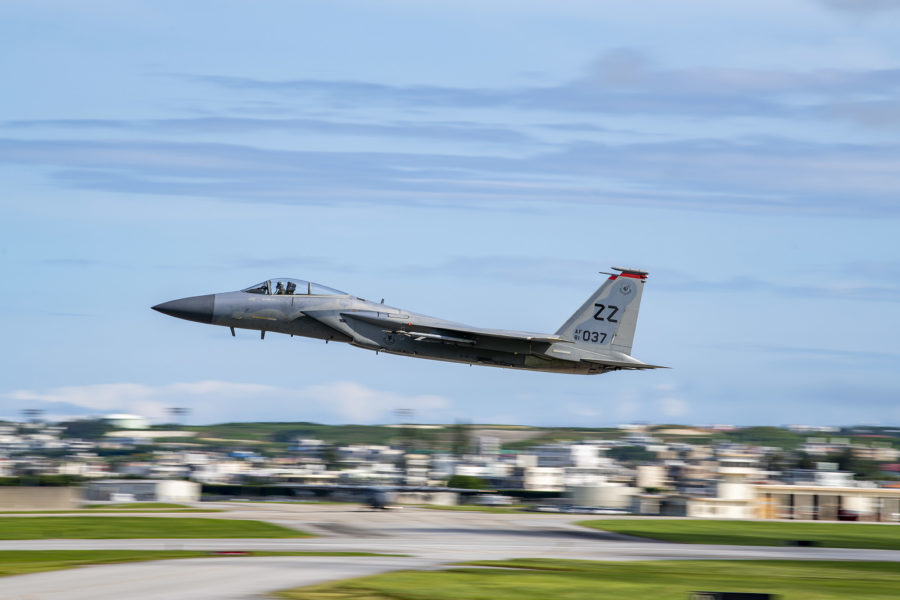 Starting Nov. 1 and continuing over the next two years, the Air Force will bring home the 48 F-15C/D Eagles now stationed at Kadena Air Base, Japan. A permanent replacement has yet to be determined, but in the meantime, other types of fighters will cycle through deployments to the base, to preserve its battle readiness as the “tip of the spear” in the Indo-Pacific.

Kadena, located on the island of Okinawa, is the Air Force’s closest land-based location to Taiwan, some 450 miles away. In addition to fighters, Kadena hosts tankers, mobility, special operations, and intelligence, surveillance, and reconnaissance platforms.

The F-15C/D model was introduced in 1979, and most examples average nearly 40 years of age. The type was expected to be replaced wholesale by the F-22 starting in the mid-2000s, but the F-22 production line was halted at less than half the planned production number by then-Defense Secretary Bob Gates in 2010. Since then, the Air Force has struggled to maintain the aging F-15C/D, imposing G-loading and speed restrictions as the type became structurally exhausted.

A statement from Kadena leadership described the retirement of the F-15s as a two-year “phased withdrawal” and said the aircraft will be backfilled temporarily with “newer and more advanced aircraft” to maintain “a steady-state presence” at the base. The only more advanced aircraft available are the F-22 Raptor, the F-35 Lightning II and new F-15EX Eagle IIs, not yet at full production for the Air Force.

Air Force officials said F-22s from Joint Base Elmendorf-Richardson, Alaska, will be the first to deploy to Kadena to backfill the F-15s, but service deployments are typically not announced in detail.

Until a permanent choice is made, the Pentagon will use the “Global Force Management process to provide backfill solutions that maintain regional deterrence and bolster our ability to uphold our treaty obligations to Japan,” the Kadena leadership said. The Pentagon could not immediately say if those options include Navy and Marine Corps aircraft, but the Global Force Management process apportions forces based on theater commander need, not necessarily the service providing the capability.

The U.S. military commitment to Japan’s security is “ironclad,” the Kadena statement said. Modernizing U.S. capabilities in the Indo-Pacific and enhancing U.S. posture there “remains a top priority,” the base statement added.

“What we intend to use it for, there, if we’re so fortunate to get that replacement, is air superiority, and some long-range weapons capabilities that you can conduct on the F-15EX,” Wilsbach said. Unlike the F-15C/D, which is an almost exclusively air-to-air platform, the F-15EX retains all the range and ground-attack weapons-carrying capabilities of the F-15E on which it is based. The EX can carry the stealthy AGM-158 Joint Air-to-Surface Standoff Missile, he noted, which will be an important force-multiplier for the units equipped.

Wilsbach said, “you will be able to see some of that as we unveil” plans in upcoming budgets.

The F-15A/B model first arrived at Kadena in 1979, and Eagles have been there ever since, upgrading to the F-15C/D and fielding the most advanced examples of the type in USAF service. The Kadena-based F-15s of the 44th and 67th fighter squadrons were the first operational Eagles to be equipped with an active electronically-scanned array (AESA) radar, the AN/APG-63(V)3, between 2007 and 2010; and in 2020, they were the first to be operational with the Lockheed Martin “Legion Pod,” which is the first infrared search-and-track system compatible with the Eagle.

Retired Lt. Gen. David A. Deptula, dean of the Mitchell Institute, said the Kadena news highlights the “consistent underfunding of the Air Force over 30 years.” The lack of an immediate, ready-to-go successor for the aged F-15s at the base shows the “neglect and shortsightedness” of “Presidential, Congressional, and Department of Defense leadership decisions made over the past three decades.” In recent years, to pay for new system development, the Air Force has had to “cut its force structure with no replacements,” he said. Thus, the vacuum left by the retirements “should be not be a surprise.”

In a draft for an op-ed, Deptula said the Air Force has consistently warned that it’s not been sized for the demands and missions placed on it by the various combatant commands, and in a 2018 study, it found “it had about a 25 percent deficit in capacity to meet the needs of the National Defense Strategy.”

The rotational replacements mentioned by the Air Force have downsides, Deptula said.

“It will stress those aircraft, maintenance personnel, the deployed aircrews, and their families, exactly at a time when pilot retention is a serious problem.” It also “deprives other combatant commands of fighter aircraft” when demand for them is very high, he said. The F-22s available for forward deployment are now in Europe to deter Russia, he added.

The Active-duty pilots at Kadena are also at career risk if they have to stay beyond a normal deployment, he noted.

Either the F-22 or F-35 should be replacing the F-15s, but there aren’t enough F-22s to go around, and F-35 haven’t been produced in needed numbers, Deptula noted. Meanwhile, “conceptual aircraft” such as collaborative combat aircraft—unmanned systems that will supplement crewed fighters—are a decade away, he said.

“The bottom line,” he said, is “we need to buy fighter aircraft capacity now at a rate to reverse the decline in fighter force structure, as what is happening at Kadena today is only the tip of the iceberg if we don’t.” Without boosting the fleet, “there will be insufficient capability and capacity to execute the new National Defense Strategy that is so reliant on deterrence.” Absent an increase in force structure, deterrence is “only an aspiration, not a reality.”