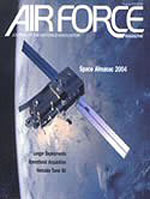 By Robert S. Dudney
The overall Air Force effort in the Vietnam War was enormous.

Facts, figures, agency and system profiles, budget data, and other information about US and foreign space programs.

By John A. Tirpak
Air Force Materiel Command will mirror the operational Air Force, not the business world.

By Adam J. Hebert
The Chief says the demand for airmen is high, and it won’t decline “for some time.” 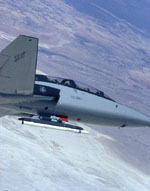 The unique 46th Test Group tries out a wide range of weapons systems over the white sands of southern New Mexico.

By Peter Grier
A review of nearly half a century of Air Force spending produces several surprises.

By Rebecca Grant
The great 1954 battle sucked US airmen into Indochina and helped set the stage for the Vietnam War.

To Honor a Generation

The new National World War II Memorial on the mall is a striking tribute in bronze and granite.

By Walter J. Boyne
The C-130 has turned out to be an airplane for the ages.

Candidates for national offices and the Board of Directors.

By Adam J. Hebert
Airman Killed in Iraq SSgt. Dustin W. Peters, 25, was killed July 11 when the Army convoy in which he was riding in Iraq was hit by an “improvised explosive device,” according to a USAF news release. Peters, a native...

By John T. Correll
Speed Over Mass “In general, in capabilities, you can just basically look at the lessons learned out of Iraqi Freedom and Enduring Freedom, that speed is more important than mass.”—“ Senior Administration official,” speaking on background, Pentagon news briefing, June...

Veterans and the VA