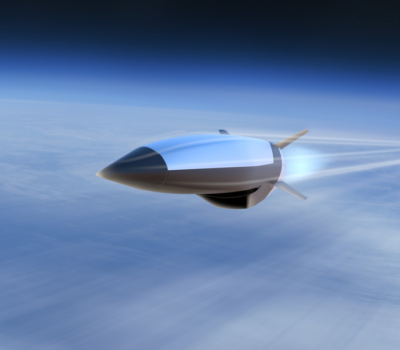 By John A. Tirpak
The Air Force has awarded Raytheon Missiles & Defense a $985.3 million cost-plus-fixed fee contract to develop and build the Hypersonic Attack Cruise Missile, or HACM, an air-breathing cruise missile intended to launched from fighter-size aircraft. Raytheon bested teams led by Lockheed Martin and Boeing for the work. 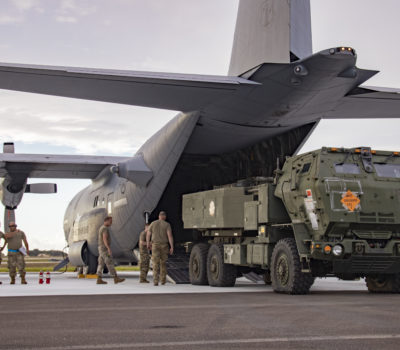 By James C. Kitfield
With the Russian army pummeling Ukraine in Europe, and China increasingly threatening its neighbor Taiwan militarily in the Indo-Pacific, the Air National Guard has embraced the culture of can-do innovation at the core of agile combat employment. 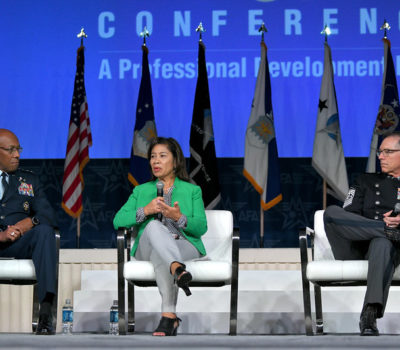 By Nick Adde
The senior-most officers and enlisted members in the Air Force and Space Force and their spouses took part in a panel discussion at AFA's Air, Space & Cyber Conference. Each iterated a common theme: The well-being of Airmen, Guardians, and their families is tantamount. 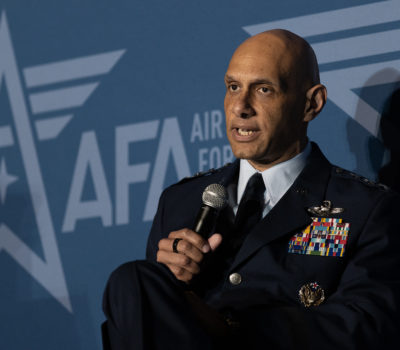 By Chris Gordon
Professional military education must better prepare Airmen for real-world warfighting scenarios, commander of Air Education and Training Command Lt. Gen. Brian S. Robinson said at AFA's Air, Space & Cyber Conference. The Air Force's new educational approach aims to create combat leaders more coherently and effectively and to do away with the curriculum that will not be applicable in a conflict. 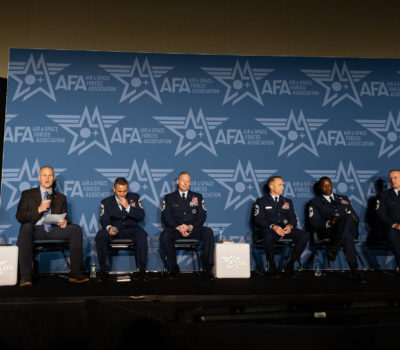 By James C. Kitfield
Pacific Air Forces only recently developed the concept of agile combat employment in response to the growing threat to its air bases from China’s ballistic missiles, and already ACE is rapidly transforming Air Force planning, training, and doctrine. At its core, ACE is officially “a proactive and reactive operational scheme of maneuver to increase survivability while generating combat power.” The concept impacts virtually every aspect of the service’s operations, as a panel discussion by command chief master sergeants made clear at AFA’s Air, Space & Cyber Conference.

When military leaders testified that “negative publicity” was hurting recruiting, some senators sympathized—but then proceeded to grill the generals and officials about dilapidated housing, sexual assault in the ranks, and other problems that have been in the news. “Today, only one of 11 eligible individuals in the 17- to 24-year-old range has a propensity to serve. Furthermore, overall public perception of the military is often inaccurate, with negative publicity overshadowing the tangible benefits and positive global impact Airmen make every day,” Lt. Gen. Caroline M. Miller, the Air Force’s deputy chief of staff for manpower, personnel, and services, said at a hearing before the Senate Armed Services personnel subcommittee.

The head of the Air National Guard is signaling he will push to increase the Air Force’s F-15EX buy, which was cut from 144 to 80 jets as part of the fiscal 2023 budget request. During a roundtable with reporters at the Air & Space Forces Association’s Air, Space & Cyber conference, ANG Commander Lt. Gen. Michael A. Loh repeatedly raised concerns about the Guard’s aging inventory of F-15C/Ds, saying all need to be replaced by the Boeing F-15EX or Lockheed Martin F-35A.

The head of the Italian Air Force will travel to Japan next month to hold talks with his Japanese counterpart about collaboration on sixth-generation fighter technology. General Luca Goretti said the visit will be a chance to explore what ambitions Rome and Tokyo share for next-generation fighters and what technologies can and cannot be shared by the nations.

The director of the Space Rapid Capabilities Office, created in 2018 to quickly develop prototypes of satellites and other urgently needed military technology, said the Space Force may not be ready when the office begins delivering systems this year. “I need to have the processes in place for rapid fielding and acceptance of these things, and that’s not getting a lot of traction right now,” Space RCO Director Kelly Hammett said Sept. 21 at the Air, Space & Cyber Conference.

The United States called on other nations to tell Russia to stop making nuclear threats and end “the horror” of its war in Ukraine as all three countries’ top diplomats spoke—but didn’t quite meet—at a high-profile U.N. Security Council meeting Sept. 22. Held alongside the annual U.N. General Assembly gathering of world leaders, the session followed a striking development in the war this week: Russia called up a portion of its reserves for the first time since World War II. At the same time, President Vladimir Putin said his nuclear-armed country will “use all means available to us” to defend itself if its territory is threatened.

A group of senators, including Ohio's Sherrod Brown, are urging Secretary of Defense Lloyd J. Austin III to treat PFAS chemicals on military installations with greater urgency. Brown joined 41 other senators in a bipartisan petition, urging Austin to set aside higher funding for per- and polyfluoroalkyl substances (PFAS) testing and remediation, and to improve planning on dealing with the so-called "forever chemicals."

General Atomics Aeronautical Systems, or GA-ASI, has announced its new Gambit Series of unmanned combat aircraft, expanding upon the inaugural Gambit drone unveiled by the company this March. The family of drones will be made up of four uniquely different airframes that all leverage a novel common core. The idea is similar to how various automotive "body kits" can share a common chassis, drivetrain, and electronics backbone, which could potentially offer big opportunities for mission and performance customization while still leveraging economies of scale.

The Pentagon is spending some of its enormous budget so that troops and their families don’t have to. Defense Secretary Lloyd J. Austin III has ordered a sweeping series of new benefits and initiatives so that service members and military families can save money on housing, groceries, child care, and other necessities. “This is also personal for me,” Austin wrote in a memo released Sept. 22. “I have seen firsthand how much our military families sacrifice to keep our force strong, healthy, and ready to defend this exceptional nation. In the face of challenges and frustrations, our families show incredible resilience.”

When he unveiled the Space Force’s official song, Chief of Space Operations Gen. John W. "Jay" Raymond said, “It’s easily singable, even by people that cannot sing, and trust me, you won’t hear me sing.” But whatever the general’s shortcomings may be in the voice department, his enlisted second, Chief Master Sgt. of the Space Force Roger A. Towberman, more than makes up for as the Guardian demonstrated Sept. 21 at the conclusion of the Air & Space Forces Association’s Air, Space & Cyber Conference.

The 50th Space Wing at then-Schriever Air Force Base, Colo., accepted control authority for ORS-1, which went into orbit June 29 and is designed to provide ISR support for troops in Southwest Asia.