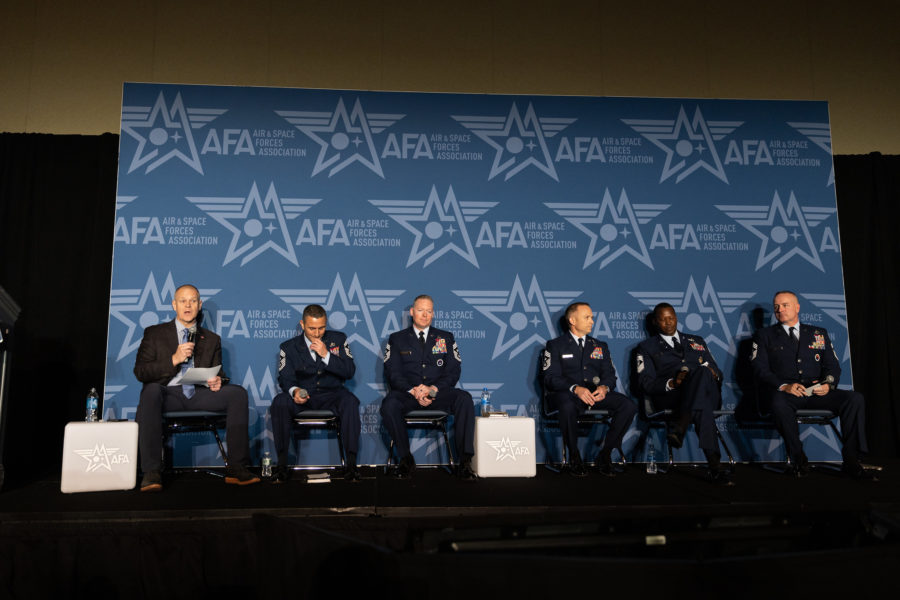 Pacific Air Forces only recently developed the concept of agile combat employment in response to the growing threat to its air bases from China’s ballistic missiles, and already ACE is rapidly transforming Air Force planning, training, and doctrine. At its core, ACE is officially “a proactive and reactive operational scheme of maneuver to increase survivability while generating combat power.” The concept impacts virtually every aspect of the service’s operations, as a panel discussion by command chief master sergeants made clear at AFA’s Air, Space & Cyber Conference.

“Whenever people ask me about ACE, I always point to Ukraine as a perfect example, because we’re now in day 209 of Russia’s planned 72-hour operation, and the second-largest air force in the world still hasn’t achieved air superiority over the 27th largest air force,” said Benjamin W. Hedden, command chief master sergeant for U.S. Air Forces in Europe. “That’s amazing, and Ukraine has accomplished that feat with agile combat employment.”

Since Russia’s capture and annexation of Crimea in 2014, he noted, the Ukrainians have worked hard to adopt the U.S. military model of a professional noncommissioned officer (NCO) corps focused on the intent of senior commanders and empowered to take the initiative in difficult circumstances. On the eve of the Russian invasion last February, the Ukrainian military put that training to good use with agile tactics of rapid redeployment and deception.

“So when the Russians struck the air ramps where Ukrainian combat aircraft were sitting the day before, they were gone. The Ukrainians are continually moving their aircraft and surface-to-air batteries,” said Hedden. As a result, according to open sources, Russia has lost an estimated 55 fixed-wing aircraft, including four in just the last 10 days.

“That’s crazy, because the Ukrainians are accomplishing it with a much smaller but more agile force,” Hedden said. “Their attitude is ‘give us the weapons and a little training, and we’ll take the fight to the Russians.’ So that’s the best example I know of what agile combat employment can do for the U.S. Air Force.”

A related lesson of the Ukraine war is the imperative of being nimble enough to operate inside an enemy’s “targeting cycle.” “We have to understand the enemy’s targeting cycle, and be fast enough to move within it, whether that means moving in 12 hours or 12 minutes,” said Hedden. “We have to be faster in terms of moving our equipment, taking the fight to the enemy, recovering our forces, and then relaunching again.”

To realize the promise of ACE, Air Mobility Command leaders have established a think-outside-the-box team of functional experts called “The Fight Club.” Composed of officers and NCOs, its mission is to envision what a winning, agile “scheme of maneuver” would look like against an adversary such as China. The group’s first realization is how tough the challenge will prove.

“There are still major gaps in the concept beginning with command and control, because this is a really huge area of operations,” said Brian P. Kruzelnick, command chief master sergeant for AMC. “Contested logistics and maneuver are also very hard problems to solve, because think about running an obstacle course while someone is shooting at you. Operations tempo is another tough one. But our Airmen are living and breathing these challenges every day.”

AMC runs an air expeditionary center that cross trains Airmen on the multiple skill sets needed to arrive at an austere air base, establish security and command-and-control, and get operations off the ground. The center represents an advanced course in training “multi-capable Airmen” who will be necessary to realizing the ACE concept of operations.

“I know the term ‘multi-capable Airmen’ freaks some people out, but if you’ve deployed in the last 30 years and you were asked to do something outside of your sole specialty, you are already a multi-capable Airman,” said Kruzelnick. “All it means is that you go out to an austere location, find gaps in achieving the mission, and you stand in those gaps. So multi-capable Airmen are nothing new, we just gave it a new name and put some structure behind it.”

Another challenge in the ACE concept of operations is the need to drive home the commander’s intent to the lowest operational echelons. The chances that smaller units will become cut off from higher command inherently grow the farther the force is dispersed from major operating bases.

“We have to be realistic that agile combat employment raises the possibility that units will be operating in an environment of degraded command-and-control, with incomplete or inaccurate information, and often times without the specialists or subject-matter experts we are accustomed to having at our big air bases,” said John G. Storms, command chief master sergeant for Air Combat Command. “That means we’ll be thrusting our junior leaders into less-than-ideal conditions and asking them to make the best decisions possible with the information at hand at the time, executing according to their commander’s intent. That’s going to be a tough situation, but if you’re a young leader, it’s a perfect opportunity to express your leadership abilities.”

Another lesson that stands out from early development of ACE as a doctrine is the need for rigorous training and regular exercises to identify gaps in capabilities and concepts. Whenever possible, those training events and exercises will need to be joint service and include international allies to better reflect how the Air Force will fight in a real-world scenario.

“As we prepare the Air Force’s enlisted corps for ACE operations, we have to develop training and exercise regimes that are really tough, and allow our enlisted leaders to take prudent risks and not be afraid of making mistakes,” Storms said. “Debriefs also need to be timely and accurate in order to ensure we learn from the mistakes we do make, because those lessons will determine how we operate in actual combat.”

The Air Force will also need to include as many allies and partners in its exercises as possible to acquaint them with the considerable operational demands of ACE. Joint exercises will also make the point to potential adversaries such as Russia and China that allies remain an asymmetrical advantage for the U.S. military.

“We need to always remember that we will not go to war alone, but rather with our allies and partners,” said Hedden, the USAFE command chief master sergeant, who noted that the interoperability enjoyed by NATO allies, many of whom fly F-35 fighter aircraft, is a force multiplier.

“Twenty years ago, a U.S. F-16 pilot flying in Europe needed a U.S. ground crew to turn that aircraft around, but if we are flying an F-35 in Europe in the future we need to be able to drop into an Italian F-35 base and get turned around and back in the air quickly,” he said. “That’s where we need to be in the future with ACE, because it means we won’t have to rely on strategic airlift and moving as many major forces quickly into an overseas theater when the bell rings.”