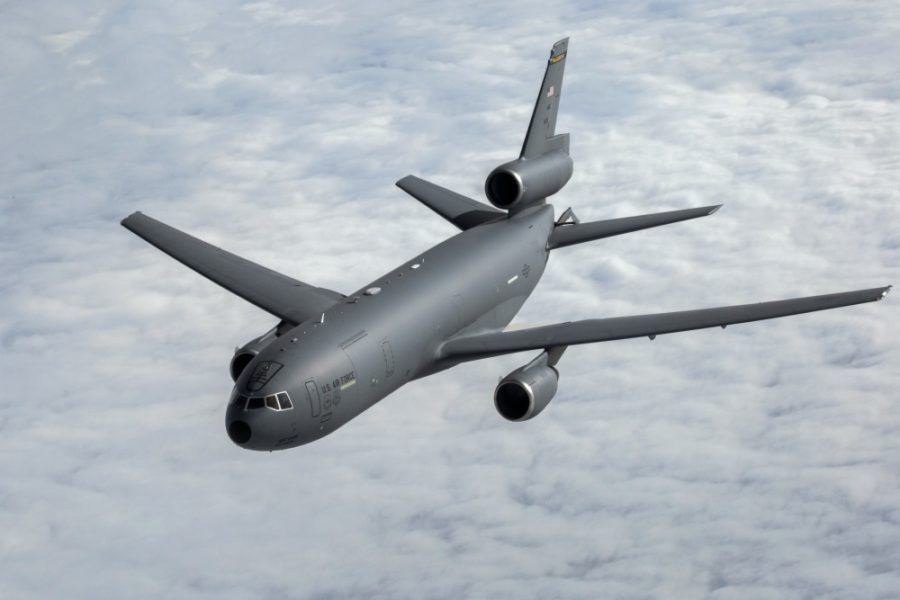 The KC-10 is a multirole tanker/transport capable of aeromedical evacuation, based on the McDonnell Douglas DC-10-30CF.

The aircraft is USAF’s largest air-refueling aircraft. It is simultaneously capable of tanker and cargo roles, enabling it to support worldwide fighter deployments. The aircraft employs an advanced aerial refueling boom and hose/ drogue system allowing it to refuel a wide variety of U.S. and allied aircraft, including the CV-22 tilt-rotor, within the same mission. The aircraft has three large fuel tanks under the cargo floor and an air-refueling operator’s station recessed into the aft fuselage. It is refuelable by boom-equipped tankers. Ongoing mods include modernized navigation, surveillance, and air traffic management (CNS/ATM) to bring the fleet into compliance with FAA mandates, and advanced Mode 5 IFF.

The fleet amassed more than 2.3 million flying hours before the first three tankers retired in 2020, the first of which arrived for storage at Davis Monthan July 13. USAF targeted fleet reduction to 40 aircraft in FY21, but Congress directed the service maintain at least 50 aircraft to provide sufficient tanker support due to shortfalls with the KC-46.

Congress further directed USAF maintain a least 38 KC-10s through FY22, and 26 through FY23 before divesting the fleet in 2024.


More articles about the KC-10 Extender

His Grandfather Helped Fly the Very First KC-10. He Was on Its Last Flight.

B-52 Flies with F-22s, Nine Other Nations Over Middle East in Bomber Task Force Mission