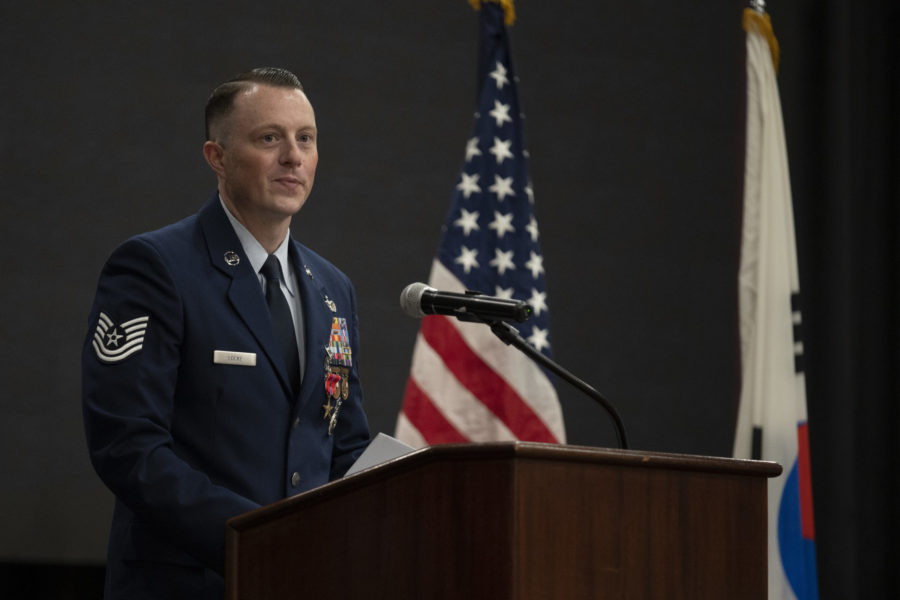 An Air Force security forces squadron flight sergeant received the Bronze Star Medal with Valor on Oct. 12 in recognition of his heroism in defending against a terrorist ground attack in Kenya in 2020.

Tech. Sgt. Jordan Locke, now a member of the 51st Security Forces Squadron at Osan Air Base in South Korea, engaged in an hours-long fight with the terrorists as they attacked Cooperative Security Location-Manda Bay, according to an Air Force press release.

Holding his ground under fire, Locke helped to conduct overwatch security, which allowed other service members to continue the fight, the release added.

Al-Shabab terrorists launched the attack on Manda Bay on Jan. 5, 2020, killing a U.S. Soldier and two American contractors in the terrorist group’s first ever attack on a U.S. military base in Kenya. However, U.S. and Kenyan forces were able to repel the terrorists and secure the base.

In the aftermath of the attack, service members were “so mentally and physically exhausted,” Locke said, leading him to check on his teammates.

“There’s a huge difference between saying, ‘Are you OK?’ and actually sitting down and having that conversation with them to make sure that they’re OK and to see if there’s anything that I can do on my end to help them,” Locke said.

Locke is just the latest of several Airmen to earn decorations for their actions during the attack. Master Sgt. Mathue B. Snow, now at Robins Air Force Base, Ga., was recognized with a Bronze Star medal earlier this month, and Senior Master Sgt. Jeremy D. Mapalo received a Bronze Star with Valor in August. Both Snow and Mapalo are also security forces Airmen.

Staff Sgt. Colleen F. Mitchell, an aerospace medical technician, was recognized as one of the Air Force’s 12 Outstanding Airmen of the Year in 2021 for her actions during the attack. She helped establish a casualty collection point and activated and led a team of four augmented medical personnel to provide immediate triage and assessment; and provided emergent prolonged field care for more than 16 hours.

The Bronze Star medal is the U.S. military’s fourth highest decoration. According to the Air Force, roughly three percent of Bronze Star medals are awarded with valor—given when the service member is in direct combat and demonstrates heroism “above what is normally expected while engaged in direct combat with an enemy of the United States, or an opposing foreign or armed force, with exposure to enemy hostilities and personal risk.”

Veterans who performed the secret, often dangerous work of testing nuclear weapons deserve new recognition and may now call themselves “Atomic Veterans,” according to the Defense Department. The department announced the Atomic Veterans Commemorative Service Medal on July 5 to recognize that “the service and sacrifice of the Atomic Veterans directly…

A pair of AC-130J Ghostrider crews have been tapped to receive the 2021 Mackay Trophy, awarded by the Air Force and the National Aeronautic Association for the year’s most meritorious flight. The award is in recognition of their actions during the withdrawal from Afghanistan that aided in the rescue of…