Skip to content
A maintainer assigned to the 28th Aircraft Maintenance Squadron marshals a B-1B Lancer assigned to the 34th Bomb Squadron prior to a Bomber Task Force mission from the continental United States on Nov. 12, 2020. USAF photo by Airman Jonah Fronk.
Expand Photo 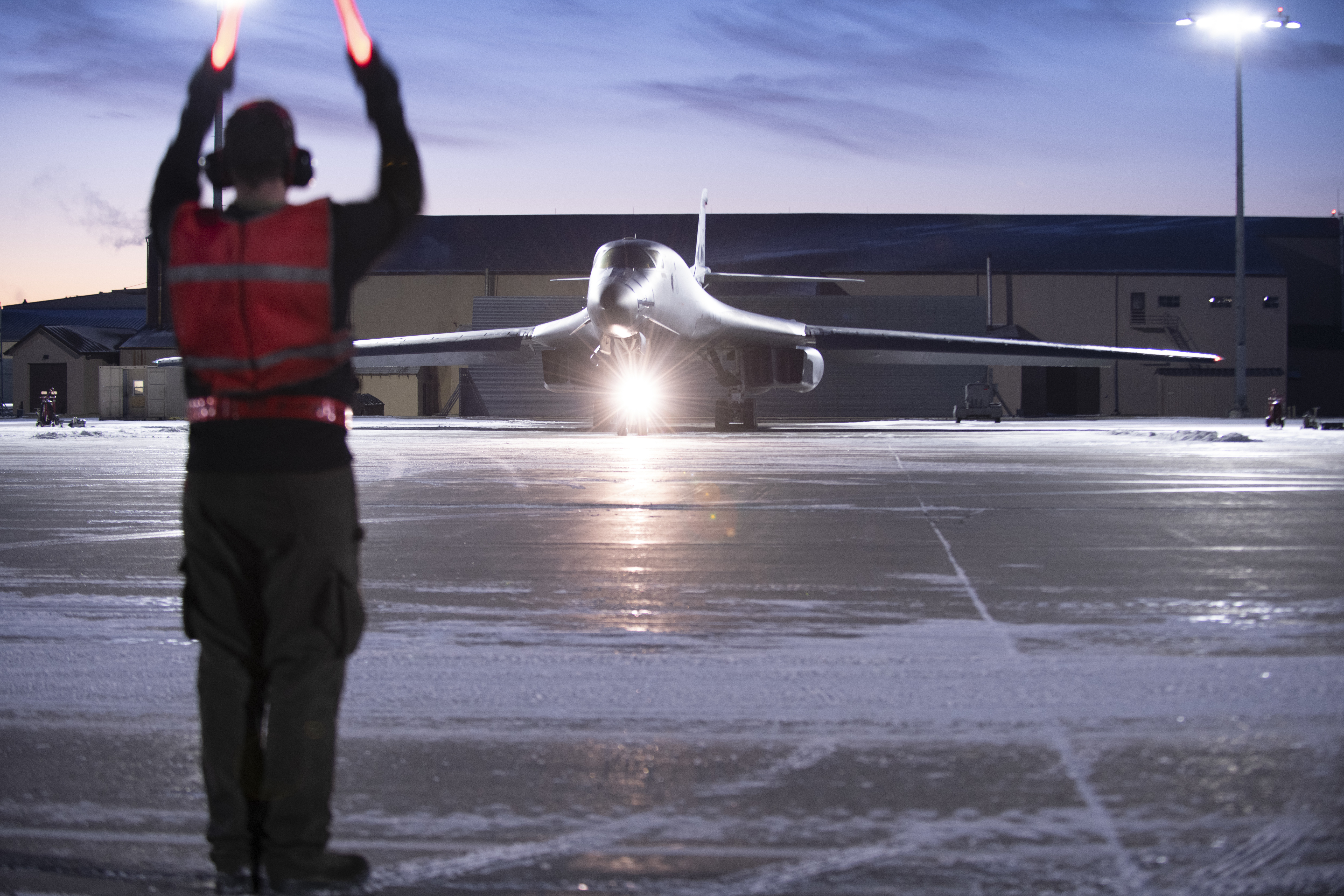 The Bomber Task Force concept is a great success, Global Strike Command chief Gen. Timothy M. Ray said Feb. 25. Bombers will go to new places in the coming months, and the annual pace of such deployments is likely to stay high, he told reporters at a press conference during Air Force Association’s virtual Aerospace Warfare Symposium.

The Air Force sent BTFs to India and Norway in recent weeks and will be “expanding beyond the normal” bomber deployment locations such as Fairford, U.K.; Diego Garcia; Moron, Spain; and Guam, Ray said. A recent deployment of two B-1Bs to Prince Sultan AB, Saudi Arabia “was a very effective statement,” he observed, “about what we can do, broadly” around the world.

“What we did in [2020] is, I think, indicative of what we can sustain,” Ray declared. “We’re going to keep this pace up.” The inability of KC-46s to participate in the aerial tanking mission has not affected GSC “at all,” he added, saying, “We’ve had tremendous support” from U.S. Transportation Command and Mobility Command. The new operating tempo is “a really good balance between what we need to do for the theaters and what our teammates can sustain.”

There will still be some margin of capacity, in bombers and tankers, in case of a contingency, he noted.

“A lot more options are on the table,” Ray said of other BTF destinations, declining to be specific until details are worked out with host countries, but noted that discussions are underway “with teammates in Europe that will give us some reach into other areas.”

Morale is “really high” as a result of the BTFs, Ray said, and crews—who are at their highest readiness since GSC was created—“enjoy doing this.” Unlike the Continuous Bomber Presence missions, discontinued last year, “it actually builds our readiness. We’re not stuck in one place without great training resources for a long period of time.”

The BTFs show that, with bombers, GSC is “just hitting our stride,” Ray declared. The BTFs are one of several concepts governed by the command’s “Bomber Agile Combat Employment” plan.

Ray reiterated that the Air Force’s ultimate requirement is for “north of 220” bombers, but said the roadmap to get to that number “is exactly the same as the one to get to 175,” which is the current program of record.  Going past 175 would be “simply more B-21s;” Ray said, referring to the new stealth bomber.

In the near term, Ray said he’ll focus on keeping the B-2 “as viable as I can” until the B-21 arrives “in the appropriate numbers.” He also defended the retirement of 17 “structurally challenged” B-1Bs—leaving 45 in the fleet—as a necessary move to keep the bomber fleet healthy. Despite the reduction in the B-1s, the maintenance force that supports it will be retained at the previous levels, “to make that a down-payment” on the B-21 maintainer force.

The re-engining of the B-52 bomber is proceeding apace, Ray noted, saying a request for proposals is out and contractors are expected to answer it sometime this summer. He couldn’t predict when a contract will be awarded, but insisted it is on schedule and not being dragged out. In fact, he said, the program is ahead of where it would have been if the Air Force had not taken advantage of congressional Section 804 rapid prototyping authorities.

Ray said he’s pleased with the progress of the AGM-183 Air-launched Rapid Response Weapon, noting that some captive-carry tests were conducted with it last year. He revealed that GSC is talking with Air Force leaders about making bombers both a “threshold and objective platform” for the HACM, or Hypersonic Attack Cruise MIssile. The air-breathing weapon will be smaller than the ARRW, and is meant to be carried by fighters, but could expand the bomber’s portfolio, Ray said. The first platform to carry it would be the B-52, and then “look for the other opportunities,” he said.

Support for the AGM-181 Long-Range Stand-Off missile is “very strong” on the Senate Armed Services Committee, Ray said, having briefed the panel last week on the new Bomber Roadmap.

“There was a good conversation with several members,” he said, during which he explained the program and reported that “programmatic impacts … have not slowed us completely out of the game … We do have the ability to stay on time [and] go faster.”

The new bomber roadmap is “very well thought out, now,” Ray said, calling it “one of the more capable and comprehensive roadmaps” among the many being developed inside the Air Force.