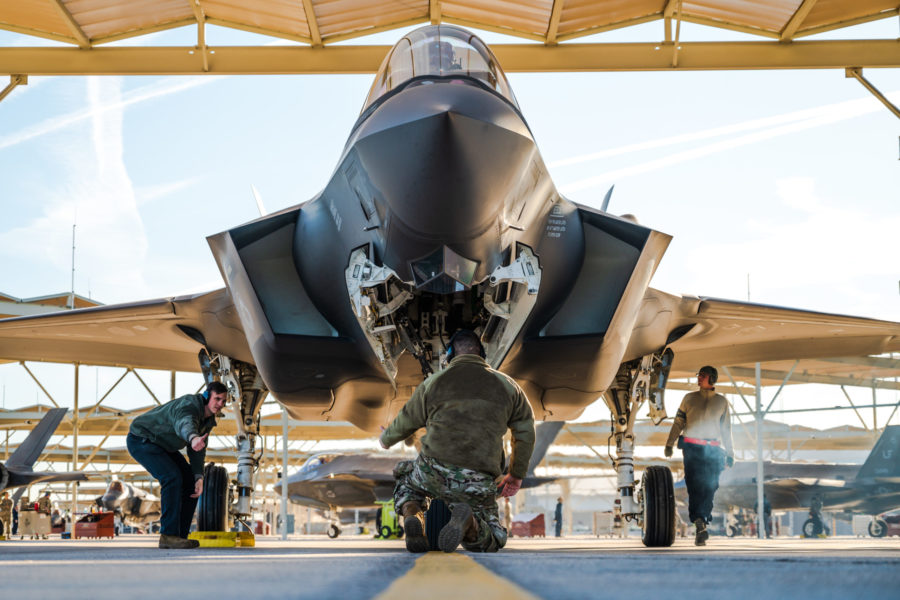 Northrop Grumman is building the F-35’s new radar, designated the AN/APG-85, the company announced Jan. 11. It described the radar as the “cornerstone” of the F-35’s future sensor suite and as the replacement for Northrop’s AN/APG-81, which is fitted to the existing version of the fighter.

The Air Force’s budget documents have referenced the AN/APG-85, an active, electronically-scanned array (AESA) radar, since last year, but Northrop has not been allowed to discuss the program until now and wasn’t cleared to go much beyond its press release.

“The capability of the F-35 advanced radar will enhance the DOD’s ability to execute the National Defense Strategy in the future,” the F-35 Joint Program Office said in response to an email query from Air & Space Forces Magazine. “Therefore, certain information will continue to be protected by enhanced security measures due to the critical nature of the technology.”

Northrop said the new radar is an “advanced multifunction sensor that will be compatible with all variants of the F-35 aircraft and will be capable of defeating current and projected adversarial air and surface threats.” It is not yet clear if it will be retrofitted to existing models of the fighter.

The new radar will probably be available in time to equip seven jets at the tail end of the Lot 17 F-35 contract, options for which were set between the Joint Program Office and Lockheed Martin earlier this month. The Joint Program Office said only that the new radar “is planned for fielding in Lot 17.” Lot 17 aircraft could potentially be delivered by late 2025 or early 2026.

Development of the radar “will incorporate some of the latest technologies available and help ensure air superiority,” the company said. “This advanced sensor will provide unparalleled battlespace situational awareness that translates into platform lethality, effectiveness and survivability.”

Neither Northrop nor the F-35 Joint Program Office would comment on the degree of commonality between the two radars, or whether the new unit will completely replace the old one or if only certain elements will be changed.

“We do not disclose technical information on operational capabilities,” the JPO said in response to most questions about the AN/APG-85.

The radar will be developed and built at Northrop’s Linthicum, Md. facilities, where the AN/APG-81 is built now. The same facility also builds the APG-83 Scalable Agile Beam Radar (SABR), an AESA that is being backfitted to the Air Force’s F-16s.

At the outset of the F-35 program, former Air Force Secretary James Roche told Air & Space Forces Magazine that the radar’s transmit and receive modules would be so reliable and degrade so gracefully,  the unit would not need service and could be “sealed in” for the life of the aircraft.

“Until we come up with something better,” Roche said at the time. “Then we’ll open it up and seal in a new one.”

The new radar will be a key piece of equipment for the Block 4 version of the F-35, which will add a host of new capabilities to the jet, such as new electronic warfare capabilities and new weapons. The need to provide power and cooling for these additional features is one of the reasons the Air Force is in the throes of deciding whether to equip Block 4 versions of its F-35As with an all-new engine based on one of the Adaptive Engine Transition Program (AETP) powerplants, or an upgrade package being touted by Pratt & Whitney, which is the sole maker of the F135 engine that powers the fighter.

Northrop noted that it is a major partner to Lockheed Martin on the F-35, and in addition to the radar, builds the center fuselage and wing skins, “several sensor systems,” avionics, mission systems and mission-planning software, pilot and maintainer training systems, “electronic warfare simulation test capability” and overall stealth capabilities.