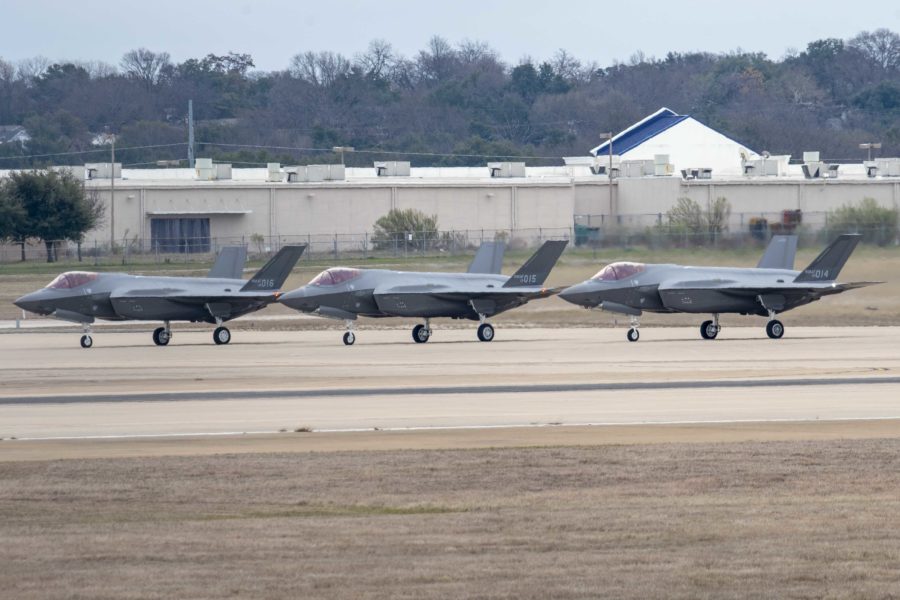 Lockheed Martin continues to build F-35 fighters, but deliveries are still on hold as the government and Pratt & Whitney investigate engine issues that contributed to an F-35B crash in December 2022, Lockheed officials said in a Jan. 24 earnings call with financial reporters.

Also during the call, officials reported that Lockheed’s classified business is growing faster than all other areas and revealed a $225 million charge against a secret program taken two years ago was on the AGM-183 ARRW hypersonic missile, on which the company took another $20 million charge in the fourth quarter of calendar 2022.

Executives also hinted that they expect contracts to be awarded on the Next-Generation Air Dominance program to be awarded around 2025.

“We are continuing production in the final assembly factories at Fort Worth, in Italy, and in Japan, at the same pace we expected to before the mishap occurred,” he said. “We’re also continuing to order and receive parts and materials from our supply chain as well.”

Acceptance flights, which are conducted by Lockheed and government pilots, are “on hold right now,” but the company is not chiefly paid based on deliveries, he said.

“The vast majority of our revenue, much greater than 90 percent, is earned” during production, he said, so the company doesn’t anticipate a huge hit on revenue due to the delay.

The delivery pause started shortly after Lockheed and the F-35 Joint Program Office agreed to a contract for Lots 15-17 of the aircraft, which Lockheed officials characterized as having “secured” a minimum number of F-35s over the next three lots. Lot 17 remains undefinitized.

Taiclet could not predict when deliveries will resume, saying the timing will depend on “when the U.S. government and the propulsion supplier conclude their ongoing mishap investigation.” Pratt & Whitney, a division of Raytheon Technologies, makes the F135 engine that powers all variants of the F-35 fighter. Raytheon officials did not comment on the status of the F135 in their earnings call, also held Jan. 24.

The F-35 Joint Program Office could not immediately comment on the status of the mishap investigation or when deliveries might resume.

“On the charge we took that was related to the program, we continue to have some learnings there,” Malave said. “But … Skunk Works is doing a great job managing that program. And, you know, this is a development program where … you continue to have learnings but in the grand scheme of things, I think we’ve managed that quite well.”

After a string of failures over several years—three in 2021 alone—the ARRW program registered successful powered flights in May and July of 2022, followed by a successful all-up test of an operationally-configured missile in December.

Lockheed’s classified programs “achieved successful milestones across multiple business areas in 2022 and grew 5 percent year over year,” Taiclet said, adding that “we continue to expect growth on classified that will outpace the rest of the portfolio over the next several years.”

Strong Interest in Other Programs

Taiclet said aircraft maker Sikorsky, a Lockheed subsidiary, was “disappointed” not to win the Army’s Future Long-Range Assault Aircraft and is “officially protesting” the Army’s choice of Bell Textron to build the aircraft. Sikorsky’s entry had “the speed, range, maneuverability and survivability” required and “is the [most] transformational and most cost-effective aircraft that best meets the selection criteria for this competition,” he said. And despite the Air Force’s cutback to its Combat Rescue Helicopter program, Taiclet said the company’s Black Hawk helicopters remain popular.

Similarly, Taiclet noted strong interest in the new Block 70 version of the F-16 fighter, which made its first flight successfully from the company’s Greenville S.C. facility Jan. 24. Twenty of the aircraft are now in work, and they will be delivered at a rate of 7-8 per year beginning this year, Taiclet added. There is significant “organic” interest in the aircraft, he said, meaning that countries already operating the F-16 may buy more—Jordan and Bulgaria are expected to make deals soon. Taiclet was also optimistic that, after long negotiation, India may order its own version of the Block 70, called the F-21, which would entail a licensed production capability in India.

Taiclet said Lockheed hasn’t had huge problems with inflation because its suppliers largely have fixed-price contracts with the company.

Where inflation is having an effect is on “new proposals … where you’ve got suppliers unwilling to provide longer-term price commitments.” There’s more negotiation on “economic price adjustments, which are escalation clauses, inflation clauses. … It’s still an ongoing issue,” Taiclet said.

He said Lockheed is getting “squeezed with our customer” and is trying to negotiate “so we can accommodate” both vendors and customers alike.