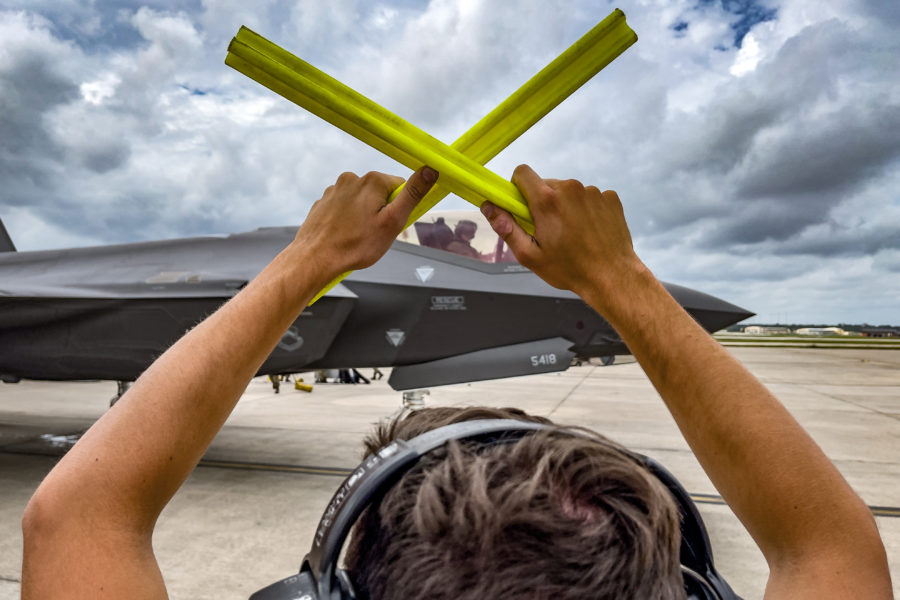 Deliveries of both products are on hold as Naval Air Systems Command continues its investigation into the root causes of the accident, the Joint Program Office reported. In the mishap, an F-35B making a vertical descent hit the ground hard at Lockheed Martin’s Fort Worth, Texas, facilities.

“Currently, acceptance of new engines has been suspended,” a JPO spokesperson told Air & Space Forces Magazine. “The length of the pause is currently to be determined, and it is hard to say how long it will last,” given NAVAIR’s ongoing investigation and the need to establish criteria “that would allow deliveries to resume,” he said. “The root cause analysis and accident investigation need to be completed first.”

The spokesman also said that “flight operations restrictions have been imposed at all F-35 production facilities, which has had the effect of halting aircraft deliveries.” The flight restrictions were imposed immediately after the accident.

“A joint JPO, Lockheed Martin, Defense Contract Management Agency (DCMA), and Pratt & Whitney team is developing procedures to lift these [flight] restrictions and resume flight operations,” he said. “At this time, it is not known how long this pause will be in effect.”

The JPO spokesman told Air & Space Forces Magazine that a safety inspection and Time Compliance Techical Directive (TCTD) have been issued for an undisclosed number of aircraft in the F-35 fleet. The affected aircraft are not with a particular unit and span the full range of F-35 variants—A, B and C—meaning that all the services are affected.

A TCTD typically involves an inspection of a part or system that may have caused an accident or a handling issue and is often accompanied by instructions to replace the part or modify it in some way. The JPO spokesperson said that the nature of the TCTD is also being withheld for operational security reasons.

Government officials said the Air Force has only grounded a “handful” of F-35As pending inspections, and that this characterization suggests less than half a dozen aircraft.

Deliveries of new F-35s have been on hold since the accident, and as a result of not being permitted to transfer those aircraft to the government before the end of the year, Lockheed Martin missed its goal of delivering 148 aircraft in calendar 2022, delivering only 141. The company said it now has nine completed aircraft awaiting final test and acceptance flights, and was “on track” to meet its commitments at the time of the mishap.

The Dec. 15 accident happened while an Air Force pilot for the Defense Contract Management Agency was conducting an acceptance test prior to delivery of the F-35B. The accident was recorded on video and showed the aircraft in a hover, then descending toward a vertical landing with wings level at what appeared to be a too-fast rate. A puff and then a stream of white smoke issued from the tail at the same time.

The aircraft bounced on the runway, and then the tail—with the engine exhaust still in vertical mode—lifted, causing the nose to strike the runway at an off-angle, then spun the aircraft around. When the aircraft turned back to its original orientation, the pilot ejected.

A Defense Contract Management Agency spokesperson said the pilot was examined at a hospital after the accident and released. The pilot had previously been assigned to DCMA and was recently “lent” back from the Air Force to help with acceptance flights, the DCMA spokesperson said.

Although the aircraft was a Marine Corps-type F-35B equipped for vertical takeoff and landing, the Air Force pilot was a test pilot trained to operate it in that mode, the Air Force said.