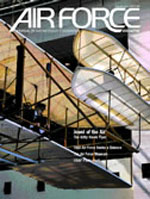 By Robert S. Dudney
Air and space power set the conditions for success in Iraq.

Total Force in a Search for Balance

By Adam J. Hebert
Allocation of active, Guard, and Reserve missions and forces is under scrutiny once again.

Saddam’s Elite in the Meat Grinder

Setting a Course for the Airborne Laser

By John A. Tirpak
The ABL will be ready in two years. Planners think it might be possible to expand the mission.

By Bruce D. Callander
Modern airpower owes much to the elite USAF commandos who hang out with the ground forces.

The Heritage of the Force

By John T. Correll
At the Air Force Museum, veterans are drawn to the vintage airplanes, but youngsters head straight for

Jewel of the Air

By Peter Grier
One hundred years on, the aura of the 1903 Wright Flyer is more powerful than ever.

By Walter J. Boyne
In the beginning, intrepid airmen set out to define the shape and substance of airpower.

A compilation of facts and figures about the Air Force Association and the Aerospace Education Foundation.

By John A. Tirpak
Bombers in the Spotlight; Rumsfeld and the Reserves; the Boeing Case...

By Adam J. Hebert
F/A-22 Software Gets Thumbs-Up The Air Force recently met a Pentagon-imposed requirement that F/A-22 software reliability improve to 20 hours between system restarts. As a result, the Defense Acquisition Board gave the software a thumbs-up. Then it imposed a stiffer...

By John T. Correll
Bring Them On “ My answer is, bring them on. We’ve got the force necessary to deal with the security situation. … We’re not going to get nervous, and we’re not leaving until we accomplish the task.”—President Bush, on militants...

By Tom Philpott
Major Pay and Other Gains Certain; Congress and the Commissaries; No Luck for Survivor Benefit Reforms