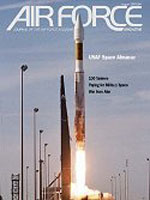 By Robert S. Dudney
A military that runs on airlift can’t afford to run short.

Facts, figures, agency and system profiles, budget data, and other information about US and foreign space programs.

Footing the Bill for Military Space

By Richard J. Newman
Important parts of Operation Iraqi Freedom were carried out by remote control.

By John A. Tirpak
The Air Force seeks a deal to replace its aged KC-135s with leased commercial tankers.

Command From the Air

By Phillip S. Meilinger
Neither wooden leg, nor corporate intrigue, nor poor elocution could keep de Seversky from his mission

By Herman S. Wolk
Under Eisenhower, strategic airpower became the centerpiece of US military strategy.

By Adam J. Hebert
Combat search and rescue soon will be part of the special operations world.

Candidates for national offices and the Board of Directors.

By John A. Tirpak
Warthog Wars, the Army Leadership Makeover, Global Shift in US Forces ....

By John T. Correll
Terrorists? Where “ Is there really an entity called al Qaeda? Was it in Afghanistan? Does it exist now?”—Syrian President Bashar Assad, Kuwaiti newspaper Al Anba, quoted by Los Angeles Times, May 26. McPeak and Powell “ The country is...