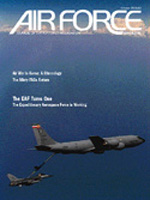 By John T. Correll
Here is the real story on how the defense budget was cut, and when.

The EAF Turns One

By John A. Tirpak
In its first year, the Expeditionary Aerospace Force began delivering on its main promise--predictabil

For Bombers, Does START Equal Stop?

By Bruce D. Callander
USAF's bold move to the Internet will let airmen transact business from home or office, any hour, any

By A. Timothy Warnock
This extensive chronology recalls key events in the first war fought by the independent US Air Force.

By James C. Kitfield
There are two dangers: The plan for an all-European defense force will fail--or it will succeed.

By Richard J. Newman
Six fighter pilots went to see again the rugged backcountry in Vietnam where they had once flown and f

Who’s who and what’s where in the Russian armed forces.

The Man Who Built the Missiles

By Walter J. Boyne
Gen. Bernard Schriever not only produced an ICBM force in record time but also led the way to American