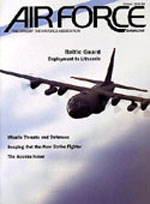 By John T. Correll
The military retirement system is no longer the incentive it used to be for people to stay in service.

The largest NATO exercise ever held in the Baltic region relied on elements of the Michigan and Maryland Air National Guard for critical air support.

Scoping Out the New Strike Fighter

By John A. Tirpak
The Joint Strike Fighter is moving from concept studies and designs toward real hardware.

So far, "lockout" problems have never stopped an operation to which the US was seriously committed.

Inside the Berlin Airlift

Who’s who and what’s where in the Russian armed forces.

By Peter Grier
Too many Air Force people are deciding life might be better out of the service.

Do Not Adjust Your Set

By Carroll V. Glines USAF
In many languages and various forms—jacket patches, cards, letters—they were official IOUs to those wh

Dark Days “The situation is worse than in 1917 [year of the Bolshevik seizure of power during World War I]. … The situation in Russia is catastrophic.”–Alexander Lebed, ex-general and presidential aspirant, in a Sept. 2, 1998, Moscow press conference...