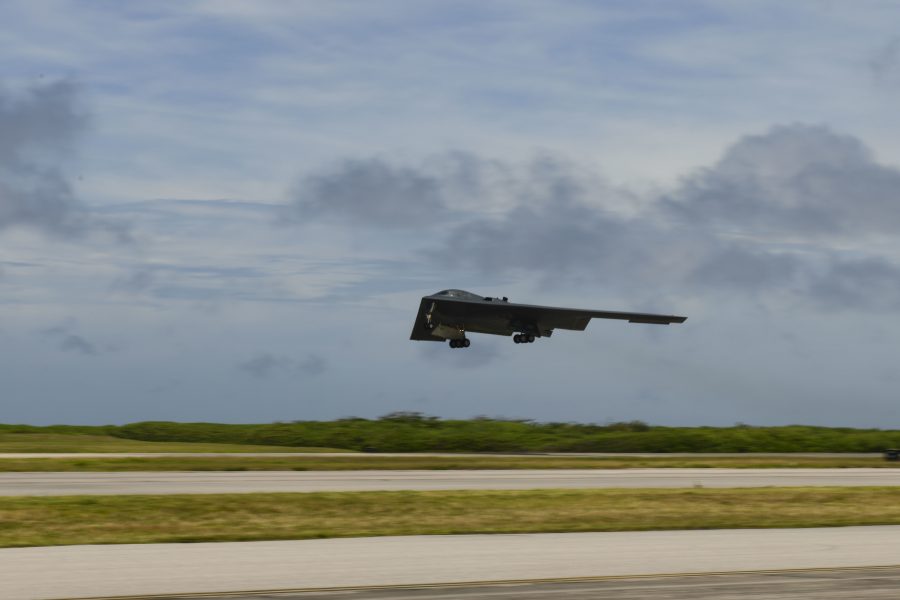 Air Force B-1s and B-2s deployed to the Indo-Pacific came together to train with U.S. and Australian joint terminal attack controllers down under, dropping training bombs at three different training ranges throughout August.

The B-1s, deployed to Andersen Air Force Base, Guam, and B-2s deployed to Naval Support Facility Diego Garcia, made multiple passes over the Delamere, Bradshaw, and Mount Bundley training areas where Marine Rotational Force-Darwin and Australian joint terminal attack controlers controlled the strikes, according to a Pacific Air Forces release. The bombers were refueled by KC-135s deployed to Australia from Kadena Air Base, Japan.

The B-2s flew 3,991 miles to make the trip. Once in Australia, they flew low passes while Marines called in “rapid” air strikes with live munitions, according to PACAF.

“It’s imperative that the U.S. Marine Corps and Australian Army work together,” said Australian Army Sgt. Aaron Costes, a JTAC with 102nd Coral Battery, in the release. “It’s such a feat that we can infill and have an aircraft come in from such long distances.”

“Airmen and Marines integrate seamlessly together because we speak the same language,” said U.S. Air Force Lt. Col. Christopher Conant, B-2 Bomber Task Force commander, in the release. “We both understand how to maneuver cognitively and physically to achieve an objective.”

The B-1s deployed to Andersen from Ellsworth Air Force Base, S.D., in mid-July and have flown several long-distance training flights, integrating with Japanese aircraft and flying over the South China Sea. B-2s deployed to Diego Garcia on Aug. 11, where they are using Air Force Global Strike Command’s overseas mobile operations center for the first time, according to a release.