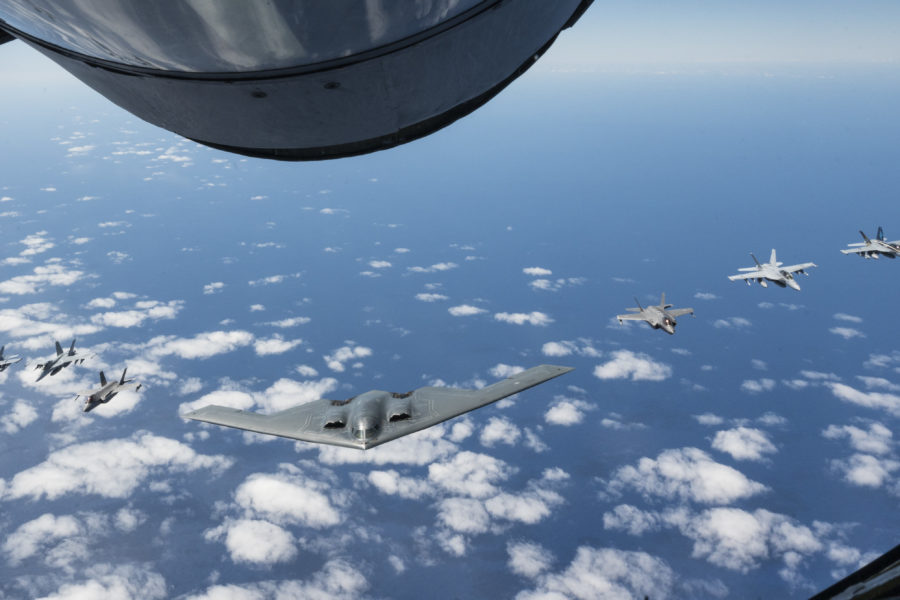 Whiteman B-2 Flies to Australia and Back, Conducts Training with RAAF

A B-2 bomber flew from Whiteman Air Force Base, Mo., to Australia and back over the course of more than 50 hours recently, integrating with five different fighter aircraft from the U.S. Air Force and the Royal Australian Air Force along the way.

The B-2 Spirit from the 509th Bomb Wing became on March 23 the first such bomber to land at Royal Australian Air Force Base Amberley, Pacific Air Forces announced in a press release.

While in Australian airspace, the B-2 refueled from a KC-135 tanker from the Alaska Air National Guard, then integrated with American F-16Cs and Australian F-35s, EA-18 Growlers, and F/A-18F Super Hornets as part of training operations.

U.S. Indo-Pacific Command boss Adm. John C. Aquilino and Royal Australian Air Force Air Vice-Marshal Joe Iervasi were on hand to observe the B-2 on the ground after it landed. After a crew change, the bomber took off again, integrating with American F-22s from Joint Base Pearl Harbor-Hickam, Hawaii, before returning home to Whiteman.

“This is the most consequential theater with the most challenging security issues, … and advancing our interoperability with critical allies like Australia is critical to maintaining a free and open Indo-Pacific,” Aquilino said in a statement. “There are many aspects that are going on daily to continue to move the security relationship forward in a positive way to provide deterrence, prevent war, and maintain peace and stability within the region.”

In a Facebook post, Whiteman officials said the B-2 was assigned to the 393rd Bomb Squadron and that the mission lasted a total of 53 hours.

B-2s have flown training missions over Australia several times over the past few years. In 2020, Whiteman B-2s deployed to Naval Support Facility Diego Garcia and then flew over Australian training areas while Marines and Australian troops trained together to control the strikes. In 2016, a B-2 from Whiteman landed at Royal Australian Air Force Base Tindal.

A B-1B Lancer also flew over Australia in 2021 to train with RAAF tankers. B-1 Lancers also operated out of Diego Garcia for the first time in 15 years this past fall. A B-2 Spirit sits at Royal Australian Air Force Base Amberley, Australia. After conducting integration with RAAF and U.S. fighters during a training mission in the Indo-Pacific region, March 23, 2022. After integrating in Australian airspace with more than eight joint and combined aircraft, the B-2 pilots landed at Amberley—for the first time—and conducted a crew swap on the ground before becoming airborne and integrating with F-22 Raptors from Joint Base Pearl Harbor-Hickam, Hawaii, and returning back to Whiteman. Exercising interoperability between the U.S. and Australia improves our great alliance and allows us to respond even faster, promoting security cooperation across the region. U.S. Air Force photo by Tech. Sgt. Hailey Haux A B-2 Spirit sits at Royal Australian Air Force Base Amberley, Aus. After conducting integration with RAAF and U.S. fighters during a CONUS-to-CONUS training mission in the Indo-Pacific region, March 23, 2022. After integrating in Australian airspace, the B-2 pilots landed at Amberley—for the first time ever—and conducted a crew swap on the ground before becoming airborne and integrating with F-22 Raptors from Joint Base Pearl Harbor-Hickam, Hawaii, then returning back to Whiteman. Enhanced Air Cooperation improves our ability to train and operate with our allies and partners across the region promoting security cooperation across the region. U.S. Air Force photo by Tech. Sgt. Hailey Haux A B-2 Spirit from Whiteman Air Force Base, Missouri, flies alongside a KC-135 Stratotanker from the Alaska Air National Guard during a training mission with the Royal Australian Air Force in the Indo-Pacific region, March 23, 2022. U.S. Air Force photo by Tech. Sgt. Hailey Haux A B-2 Spirit prepares to land at Royal Australian Air Force Base Amberley, Australia after conducting integration with RAAF and U.S. fighters during a training mission in the Indo-Pacific region, March 23, 2022. The mission provided an opportunity to train and work with our allies and partners in joint and coalition operations and exercises. U.S. Air Force photo by Tech. Sgt. Hailey Haux
Air
Expand Comments

Much About the Air Force’s New B-21 Bomber Remains a...