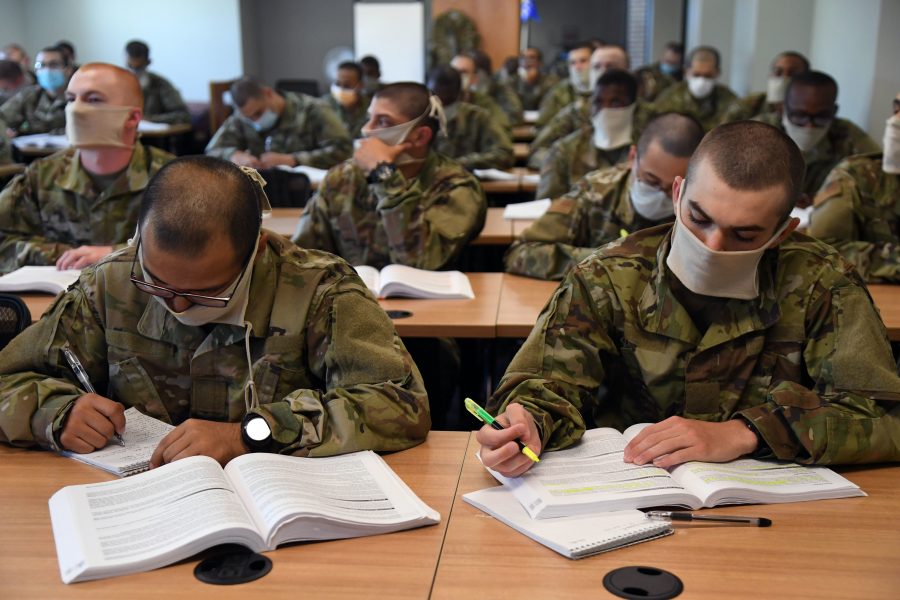 The Air Force will host Basic Military Training at two locations—Joint Base San Antonio-Lackland, Texas, and Keesler Air Force Base, Miss.—from June 2 until COVID-19 surge operations wrap up, Air Education and Training Command announced May 26. However, the service doesn’t intend to host BMT outside of Lackland once the new coronavirus pandemic ends, the command noted in a release.

“We plan to receive 60 recruits per week, through the last week of September, so that we can supplement the Air Force’s BMT production at Lackland while we manage the effects of COVID-19,” 2nd Air Force Commander Maj. Gen. Andrea Tullos told reporters during a May 26 media roundtable.

These recruits will go through a six-week BMT cycle, according to AETC. Though Keesler-based Airmen will train for a week and a half less than their counterparts at Lackland, they will have longer training days.

“The shortened requirement, down from eight and a half weeks, is due to the physical layout of the BMT area, the small number of recruits, and a surge schedule, which trains Airmen 10 hours per day, six days a week, versus eight hours per day,” the release states.

Full operational capability will be reached once 360 Airmen enter the pipeline at the Mississippi base, Tullos said.

All Airmen who graduate from BMT at Keesler will stay local for technical school, she noted.

“What we have found is that a lot of the risk of both exposure to the trainees, as well as the trainees potentially exposing the public, is their transiting central transportation hub—such as the airports and bus stations—so this allows us to just keep them here at Keesler and get them right in for their technical training,” she explained.

The decision to host BMT at two bases follows a six-week proof of concept held at the Mississippi base that looked to show that the Air Force could host BMT at locations other than Lackland in case of contingencies. The flight of Air Force trainees who took part in the concept of operations graduated May 15.

“This capability was a deliberately developed option to disperse the delivery of BMT during contingencies to provide surge capacity and introduce agility in the training pipeline construct,” Tullos said in the release. “This move also helps ensure the health and safety of our trainees and instructors by allowing proper safety controls, like physical distancing and deep cleaning.”

While Tullos said the proof of concept and upcoming BMT training at Keesler will be very similar, one marked difference will involve physical training.

“As it relates to physical training, we have released what we are now calling a basic training standard,” Tullos said “This has more to do with the fact that the Air Force suspended fitness testing than it does the experience of the personnel who came through. So that group will be taking a physical training test, if you will, to ensure that they can do the right number of sit-ups, push ups, and a mile and a half run.”

A more deliberate approach to PT is being taken to make sure trainees aren’t exposed “to lower-extremity injuries” and get enough time to work their way up to service fitness standards despite training on an abbreviated schedule, Tullos said.

“I don’t think that will be noticeable to the trainee, but it’s something different for the cadre because it just means we reorganized the order in which we do certain activities to make sure that we were reducing the chances that someone who is less conditioned would be injured in the process,” she explained.

Editor’s Note: This story was updated at 3:07 p.m. EDT to clarify differences in BMT between Keesler and Lackland, and at 7:48 p.m. to include information from a media roundtable.