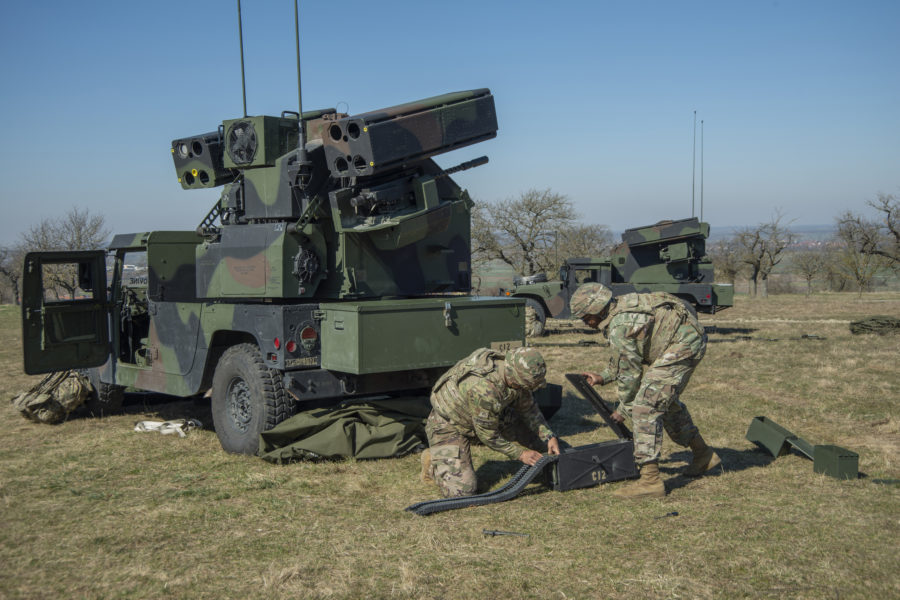 On the eve of a pivotal meeting on how to help Ukraine respond to Russia’s nearly yearlong invasion, the Biden administration announced a $2.5 billion military aid package Jan. 19, which will send Stryker armored personnel carriers for the first time and also provide “critical support for Ukraine’s air defense,” according to the Department of Defense.

Armored forces and air defense are likely to be the top focus of the meeting of the Ukraine Defense Contact Group at Ramstein Air Base in Germany, according to DOD officials.

“The Kremlin’s most recent air attacks against Ukraine’s critical infrastructure again demonstrate the devastating impact of Russia’s brutal war in Ukraine,” a DOD news release stated. “This package provides additional NASAMS munitions and Avenger air defense systems to help Ukraine counter a range of short- and medium-range threats and bolster Ukraine’s layered air defense. The 59 Bradley IFVs included in this package, together with the 50 Bradleys previously committed on January 6, and the 90 Stryker APCs will provide Ukraine with two brigades of armored capability.”

The U.S. aid, however, comes amid some debate among allies supporting Ukraine, principally over whether German-made Leopard tanks will be in the mix. Defense Secretary Lloyd J. Austin III met with German Defense Minister Boris Pistorius on Jan. 19 in an attempt to forge a common position.

Pentagon officials described the allied support as a carefully calibrated effort to help the Ukrainians defend their sovereignty without escalating the war into a direct U.S.-Russian confrontation.

“There’s kind of been these phases and our security assistance has really focused on surging capabilities for the phase,” Colin Kahl, the undersecretary of defense for policy, told reporters at the Pentagon on Jan. 18, following a trip he made to Kyiv.

But there is some consternation among former officials and defense experts about whether the West is moving fast enough and doing enough to support the Ukrainians.

“They’re making a bunch of incremental decisions and trying to make it sound prudent,” Eliot Cohen of the Center for Strategic and International Studies told Air & Space Forces Magazine. “And it’s not prudent in war because that might be an approach that works in other walks of life, but it doesn’t work in war.”

As Ukraine’s energy grid has been pummeled by Russian missile and drone attacks, Germany has made it clear that it does not want to be the first to introduce Western-made tanks onto the battlefield.

“Consent is a secondary issue here,” Polish Prime Minister Mateusz Morawiecki said Jan. 18. “We will either get this agreement quickly, or we will do the right thing ourselves.”

While the U.K. says it is sending a squadron of Challenger II tanks, America’s main battle tank, the M1 Abrams, has not been pledged.

Finland has also said it is willing to send some of its German-made Leopard tanks to Ukraine, but leaders in Helsinki are waiting on NATO members to take the lead.

Amid the public debate, President Biden spoke with German chancellor Olaf Scholtz to discuss “their ongoing assistance to Ukraine,” according to a White House readout of the call.

Outside of government, there has been frustration over Berlin’s response.

“Germany is in danger of forfeiting its hard-earned moral authority if it does not step forward in a clear, decisive way to do all it can to ensure Russia does not win,” retired Lt. Gen. Ben Hodges, former commander of U.S. Army Europe, said in a tweet.

The U.S. previously said it will provide 4,000 Zuni rockets and an unspecified amount of Joint Direct Attack Munitions (JDAM) guided bombs in the past month. The U.S. has been providing anti-radiation missiles for months, and it is adding an unspecified amount of High-speed Anti-radiation missiles (HARMs) in the latest package, though those munitions are intended to attack surface-to-air sites, while the Zunis and JDAMs offer a strike capability. Zuni rockets come in guided and unguided variants, though the Pentagon declined to say which type the U.S. is providing when asked by Air & Space Forces Magazine, citing operational security. Systems that are not on the table at the meeting are fixed-wing aircraft and long-range ATACMS missiles.

Russia’s attacks, however, often come from areas outside the range of U.S.-provided systems the Biden administration has given Kyiv. Drone bases are set up in occupied Crimea, but the GMLRS missiles fired from HIMARS launchers only have a range of about 50 miles.

“Get the right weapons into their hands,” Cohen said, highlighting ATACMS. “By doing that you help demoralize the Russians because part what’s giving the Russians hope is exactly this kind of dribbling in of really advanced systems. They really need to be able to hit Russian targets throughout the entire depth and breadth of Ukraine.”

During a visit to Washington, British Foreign Secretary James Cleverly said the West needs a strategy to aid Ukraine to win the war, not merely sustain itself against Russian attacks. While noting his country’s leading role as the second-largest military aid donor to Ukraine behind the U.S. and its recent provision of Challenger IIs, Cleverly said it was a “moral imperative” to ensure Ukraine wins on the battlefield.

The war is now a brutal battle of artillery and armor–Kahl said the war is a “grinding slugfest.”

Cleverly, the U.K.’s top diplomat, said Russian President Vladimir Putin’s strategy was to outlast the West. Cleverly, who met with Secretary of State Antony Blinken during his visit to Washington, said Ukraine’s allies should not play into the Kremlin’s hands.

“It will cost so much more in human lives and so much more in money, if we allow this to be a long, drawn-out attritional war,” Cleverly said Jan. 17 at the Center for Strategic and International Studies. “What Putin should understand is we are going to have the strategic endurance to stick with them until the job is done.”

When the Ukraine Defense Contact Group meets in Germany late this month, provision of fighters to Ukraine will be a key topic of discussion, former Supreme Allied Commander Europe and retired Gen. Tod D. Wolters said. While he thinks it should happen, he sees the political situation for such a…

The Biden administration announced a massive new aid package for Ukraine on Jan. 6, totaling over $3 billion and including armored infantry fighting vehicles and other weapons once considered off-limits. The latest package also includes new air capabilities. In a bid to bolster Ukraine's air force, the U.S. will send…