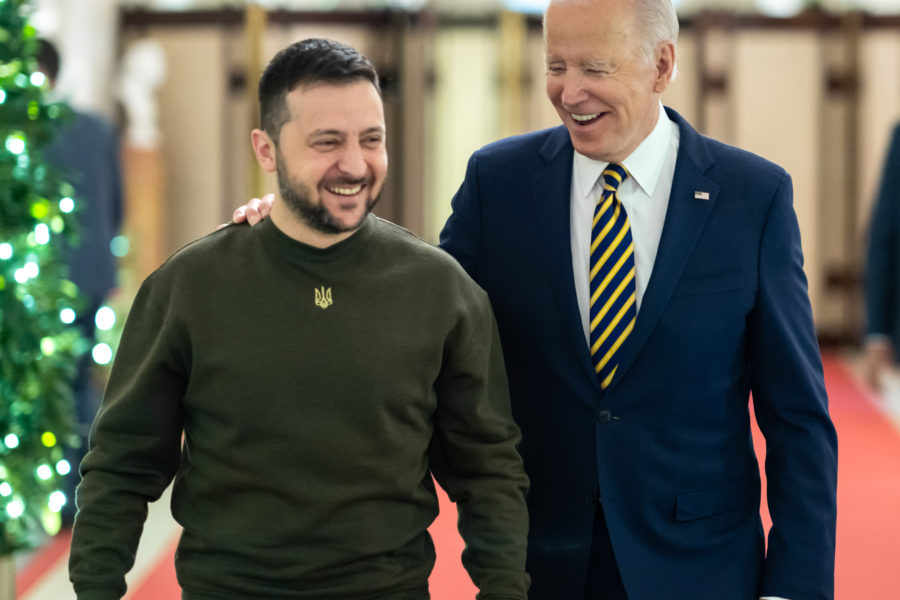 The United States will send a Patriot air and missile defense system to Ukraine and provide precision-guided munitions in one of the most significant grants of American military aid to Kyiv since Russia invaded Ukraine in February.

The State Department said the precision munitions it will provide would be the “first transfer of Joint Direct Attack Munitions, which will provide the Ukrainian Air Force with enhanced precision strike capabilities against Russia’s invading forces.” It is not clear precisely how Ukraine would deploy such weapons.

The Patriot system is a $1 billion integrated air defense system, consisting of interceptors, radar, command and control, and other support elements. It takes about 90 people to man such a battery. However, it will be several months before Ukraine can field the system.

“Patriot is one of the world’s most advanced air defense systems, and it will give Ukraine a critical long-range capability to defend its airspace,” a senior U.S. defense official told reporters. “It is capable of intercepting cruise missiles, ballistic missiles, and aircraft. It’s important to put the Patriot battery in context for aired defense. There is no silver bullet. Our goal is to help Ukraine strengthen a layered, integrated approach to air defense that will include Ukraine’s own legacy capabilities, as well as NATO standard systems.”

This latest $1.85 billion security aid package brings marks approximately $21.3 billion in total weapons and other security aid provided by the U.S. since the start of the war in February.

Providing JDAMs signals a significant move to strengthening Ukraine’s Air Force. The U.S. did not disclose the exact munitions it would provide, how many aerial munitions, or the monetary value of those weapons. JDAM kits are fitted to unguided bombs.

One billion dollars of the support, including the Patriots and aerial munitions, comes from Presidential Drawdown Authority (PDA) authorized by President Joe Biden. The other $850 million in aid comes from the Ukraine Security Assistance Initiative (USAI).

Zelenskyy and the White House are looking to shore up Congressional support for Ukraine as Republicans take over the House of Representatives and take over control of the chamber in the new year. In one of her final acts as Speaker of the House, Nanci Pelosi (D-Calif.) invited Zelenskyy to speak to members.

Zelenskyy arrived at Joint Base Andrews outside of Washington shortly before noon on Dec. 21 aboard a U.S. Air Force C-40, bearing the Air Force executive aircraft white and light blue livery with “United States of America” emblazed in large letters on the fuselage. The Ukrainian leader stepped off the plane wearing his trademark tactical green crewneck shirt and combat boots.

The U.S. aid marks a significant step in its plan to improve Ukraine’s air and missile defense, fulfilling a long-standing request from Kyiv. Patriot is America’s most advanced tactical air and missile defense system, and each interceptor missile costs more than $4 million. Ukraine has been pummeled by Russian missiles, many of them launched from Russian aircraft. The Patriot provides a long-range defense capability Ukraine has not previously had.

The Biden administration has refrained from providing long-range systems to Ukraine in an effort to prevent escalation. While it has provided the High Mobility Artillery Rocket System (HIMARS), it did so on the condition Ukraine would not use the weapons to strike Russian territory. The U.S. has so far declined to provide the longer-range Army Tactical Missile System (ATACMS) for HIMARS. But the latest aid package does include additional shorter-range HIMARS rounds.

According to the State Department, the latest aid package includes:

Ukraine has carried out bold attacks with its own weapons. It blew up a bridge connecting Russia to Crimea, which Russia occupied and annexed in 2014. An airbase deep inside Russia was targeted and several of Russia’s strategic bombers were damaged in an attack Ukraine has not denied. American officials maintain Ukraine is free to make its own military decisions with non-U.S. origin weapons.

The U.S. said it was not concerned about any escalatory effect of providing the Patriot battery. “This will be an air defense capability among others that they’re being provided as part of an integrated air defense system,” a senior military official said. “It is by default, by nature, a defensive system.”

According to the Pentagon, the U.S. will train Ukrainian forces on a Patriot system in an unnamed European country. Training will take months.

“The United States is sending Patriot to Ukraine for three reasons: to help defend against Russian missile attacks, which are pounding Ukrainian cities and disrupting utilities; to strongly convey political support; and because the United States has few other air defenses to send,” the Center for Strategic and International Studies wrote in an analysis of the decision.

At $4 million per shot, Patriot will not be useful in combatting low-cost Iranian drones. Ukraine has been moderately successful defended against the fiberglass Shahed-136 kamikaze systems. The Patriot system is better suited for stopping ballistic and cruise missile attacks. In addition, the U.S. has previously provided 1,600 Stinger man-portable air defenses (MANPADS), four Avengers, vehicle-mounted Stingers, and two National Advanced Surface-to-Air Missile System (NASAMS) short-to-medium range systems. Western nations have also provided defenses, such as Germany’s IRIS-T medium-range system, which offers a similar capability to the NASAMS. Western countries have also provided older HAWK systems, and the U.S. has pledged to refurnish more HAWKs to provide to Ukraine. The Patriot replaced the HAWK system in U.S. use.

The Patriot system that will be given to Ukraine is one of only 15 U.S. systems in existence.

“Patriot is a low-density, high-demand asset to the U.S. air defense efforts and has one of the highest operational tempos of the joint force,” CSIS experts Tom Karako and Mark F. Cancian wrote in their analysis. “Every battalion, battery, and firing unit is therefore a valuable commodity.”

American Patriot operators take months to train on the systems.

“The training will begin very soon,” the senior defense official said. “It’ll take several months, and the training is the limiting timeframe here.”

During Zelenskyy’s visit to the White House, the Ukrainian president underscored his country’s need for more U.S. weapons to fight Russia. Addressing a reporter’s question, he said in Ukrainian: “What’s going to happen after Patriots are installed? After that, we will send another signal to President Biden that we would like to get more Patriots.”

Zelenskyy then switched to English. “We are in war,” he said. “I’m sorry.”