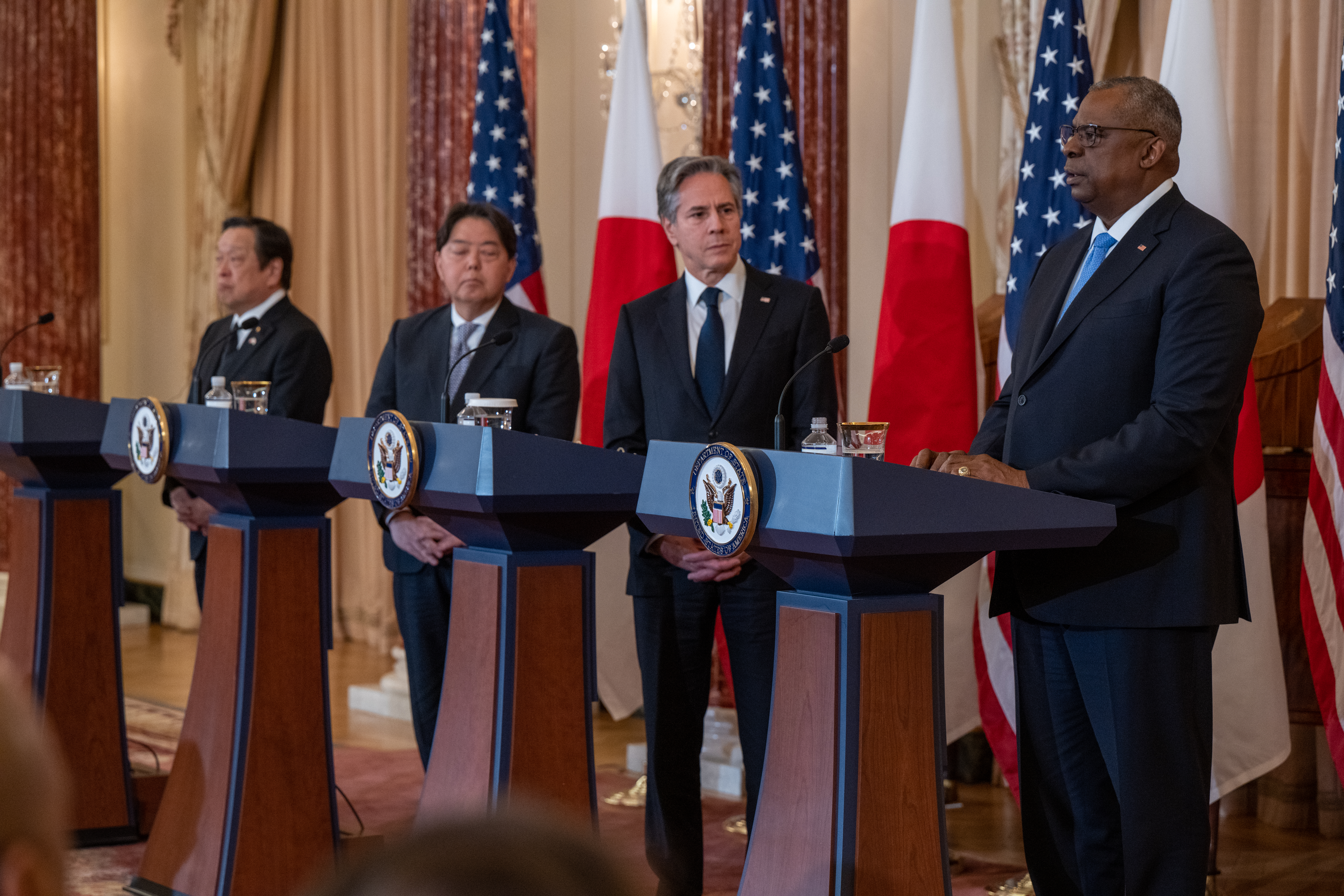 The U.S. and Japan are expanding their security commitment into space as part of a series of new actions aimed at bolstering the countries’ defenses against China and other threats in the Pacific.

U.S. officials said “attacks to, from, or within space” could lead to the invocation of Article V of the U.S.-Japan Security Treaty, in which the two countries could “act to meet the common danger” if either country is attacked on Japanese territory.

In their remarks, the Japanese officials presented a striking view of China as a threat to the world order that must be countered. Japan adopted a pacifist military policy following World War II, but now, both the U.S. and Japan see China as a possible military foe. Citing Japan’s new national security strategy and the fall release of the U.S. National Defense Strategy which describes China as America’s “pacing” challenge, leaders from both countries said their interests were firmly aligned.

“China presents an unprecedented and the greatest strategic challenge,” Hayashi said. “Its foreign policy to recreate international order to serve its self-interest is a grave concern for the Japan-U.S. alliance and for the whole of the international community.”

Japan’s new national security strategy will massively increase defense spending to two percent of gross domestic product and develop new “counterstrike” capabilities. Japan’s southernmost tip lies around 100 miles from Taiwan, the self-governing island Chinese leaders aim to unite with the mainland. A recent series of wargames by the Center for Strategic and International Studies found that Japan would quickly be drawn into a conflict over Taiwan if America came to Taipei’s aid.

Austin said recent Chinese behavior in the region was “provocative,” with increased military flights and naval operations over the median line of the Taiwan Strait as part of a “new normal.” China also recently intercepted a U.S. Air Force RC-135 over the South China Sea in what the U.S. military said was an unsafe manner, an action Austin condemned during his press conference.

Hayashi said that America and Japan’s recent military strategies are “based on the increasingly severe security environment” and cited North Korea and Russia, in addition to China, as growing threats to international order.

U.S. President Joe Biden and Japanese Prime Minister Kishida Fumio will meet at the White House on Jan. 13. Austin welcomed Hamada to the Pentagon on Jan. 12.

“There is clear strategic alignment between the visions of President Biden and Prime Minister Kishida,” Austin said.

In recent months, Japan has been drawn into China’s and North Korea’s recent shows of military force, and Japan has unresolved territorial claims with Russia. China’s recent moves surrounding Taiwan involved missiles falling into Japan’s exclusive economic zone in August. In October, a North Korean ballistic missile flew over the Japanese mainland for the first time in five years.

China is bolstering its military space program and has tested anti-satellite weapons as recently as 2007. Russia, meanwhile, has issued public threats against U.S. and Western satellites being used to help Ukraine in its fight against the Russian invasion. U.S. military leaders have warned that space assets would likely be targeted in future conflicts.

“China is absolutely developing a wide array of counterspace and antisatellite capabilities that could be used in a future conflict,” Brian Weeden of the Secure World Foundation, which promotes the peaceful use of space, told Air & Space Forces Magazine. “I think that, coupled with the prevalence of space capabilities in the current Ukraine conflict has created concerns in Tokyo and Washington that a future conflict with China may involve attacks in satellites.”

Leaders from Japan and the U.S. said the move to include space as part of Article V was an important new deterrent.

“The outer space component of this is important to the security and prosperity of our alliance,” Blinken said. “That is significant.”

Weeden said the move appeared aimed at dissuading China from viewing an attack on a U.S. or Japanese satellite as more permissible than other military action.

“I would interpret this as a signal to Beijing that Tokyo and Washington consider attacks on their military satellites in the same vein as attacks on military aircraft or ships,” Weeden, a former Air Force space operations and ICBM officer, said.

In addition to new space cooperation, the U.S. will deploy MQ-9 Reapers to Kanoya Air Base, a Japanese base, to “increase maritime domain awareness” in the East China Sea, according to the DOD.

The DOD also said Japan and the U.S. “committed to expand joint/shared use of U.S. and Japanese facilities,” though there were no explicit pledges to increase the ability for U.S. forces to operate from Japanese bases.

Pentagon press secretary Brig. Gen. Patrick S. Ryder said no firm plans about basing have been set, though he noted during a press briefing on Jan. 12 that the U.S. military wants to take “advantage of opportunities to be able to position forces throughout the Indo-Pacific region in a distributed way that provides us with agility, flexibility, and maneuverability to be able to respond to any regional threats.”

The Air Force has looked to disperse its aircraft to more bases as part of the Agile Combat Employment doctrine. The CSIS report on its wargames recommended the U.S. “fortify and expand” air bases in Japan so U.S. aircraft could continue operating in a conflict with China to “dilute the effects of missile attacks” to American aircraft on the ground.

“We want to be effective, and we do need to expand and normalize training at distributed air bases that exist throughout Japan,” said retired Air Force Lt. Gen. David A. Deptula, dean of the Mitchell Institute for Aerospace Studies and the former vice commander of Pacific Air Forces. “That would complicate any kind of a contingency involving a Chinese invasion of Taiwan.”