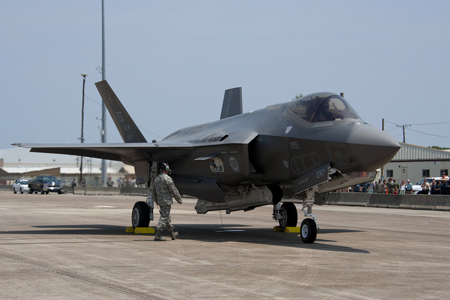 Air Force has approved the plan to bed down 36 F-35 strike fighters at Nellis AFB, Nev., between 2012 and 2020, to support test activities and weapons school training there, announced base officials Tuesday. This plan is laid down in the newly issued record of decision that Kathleen Ferguson, USAF’s deputy assistant secretary for installations, signed on June 24, following May’s release of the final version of the environmental impact statement. The EIS explored the various ecological effects of basing the F-35s at the desert base; the service had to complete it before rendering its decision. The stealth fighters’ beddown will result in an increase of 412 personnel, require construction of new facilities, and result in the alteration and demolition of some of Nellis’ existing facilities, said the officials. Twelve of the F-35s will support testing, while WS training will utilize the remaining 24, states the ROD. Nellis is the second USAF installation, behind Eglin AFB, Fla., for which the service leadership has made a final decision to assign F-35s. It is working towards additional beddowns. Just last week, Eglin received its first F-35 for the nascent schoolhouse there. (Record of decision full document) (Final EIS full document; caution, massive file.)