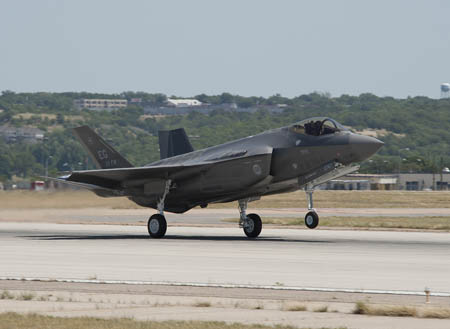 33rd Fighter Wing at Eglin AFB, Fla., on Thursday welcomed the arrival of AF-9, the first production-model F-35A strike fighter to join the F-35 joint schoolhouse there. The aircraft touched down after a ferry flight from Fort Worth, Tex. The wing will utilize AF-9, which is in the Air Force’s conventional takeoff configuration, to help train F-35 pilots and maintainers who will begin coursework at Eglin’s integrated training center this fall. “The exceptional capabilities of this fifth generation fighter are now in the very capable hands of the men and women of the 33rd Fighter Wing who are ushering in a new era of F-35 training,” said Larry Lawson, F-35 program general manager for prime contractor Lockheed Martin, in the company’s release. At full strength, 59 F-35s will call Eglin home for training purposes, including Marine Corps F-35Bs and Navy F-35Cs.