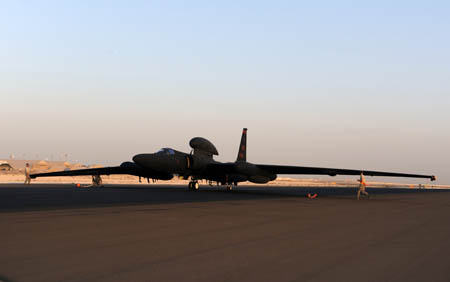 he Fiscal 2013 budget decision to retain the U-2 for longer and retire the Global Hawk Block 30 variant was pretty much a no-brainer, according to Lt. Gen. Larry James, the Air Staff’s intelligence-surveillance-reconnaissance chief. USAF thinks the U-2 has plenty of airframe life left in it, potentially carrying it “another 40 years,” he said Wednesday during an Aviation Week conference in Arlington, Va. Its sensors are superior to those of the Block 30, and, recently, “the Joint Staff changed the high-altitude requirement set,” he told reporters after his speech. The nature of this change is classified, but means that the U-2 “is now able to meet that requirement set,” and it negates any advantages to retaining the Block 30, which had less capability and higher operating cost, said James. The U-2 “is better at” electro-optical and infrared surveillance, he said, and “the capacity off the bird is better,” meaning it can store and transmit comparatively larger volumes of data. The Air Force will retain the U-2’s optical bar camera, noted James. The service will operate the Block 30s through the end of the fiscal year, but it hasn’t decided yet what will happen to the infrastructure at Sigonella, Italy, or on Guam meant to support them, he said. It’s possible the Block 30s could be made available for foreign military sales, he acknowledged, but that, too, is “still to be worked.”