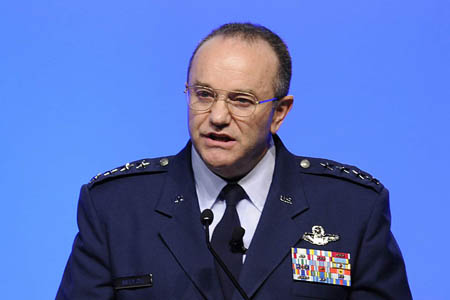 The Air Force’s initial share of the $400 billion, 12-year defense budget cut imposed by President Obama is $49 billion from the next five years, Vice Chief of Staff Gen. Philip Breedlove said Wednesday. Addressing AFA’s Mitchell Institute in Arlington, Va., Breedlove apologized for the brevity of his appearance, saying he had to resume a presentation to service Secretary Michael Donley and Chief of Staff Gen. Norton Schwartz “about how we’re going to get through the next five years without $49 billion.” Breedlove said the intensive budget cutting drill has consumed “the last 10 days of my life,” and he was heading back to “defend my skin.” He warned contractors attending the event that the Air Force will be even more financially constrained and will insist more than ever on programs being delivered as promised, on time and on budget.