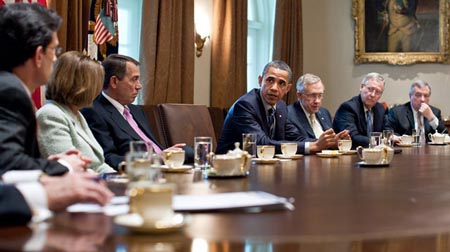 Obama plans $400 billion in cuts to the defense budget by 2023, he announced Wednesday as part of his outline on how to reduce the federal deficit by $4 trillion by then. This goal goes beyond the reductions already reflected in the Pentagon’s Fiscal 2012 budget request. “Over the last two years, [Defense] Secretary Bob Gates has courageously taken on wasteful spending, saving $400 billion in current and future spending. I believe we can do that again,” stated Obama. To accomplish this, Obama said the Defense Department will need to continue eliminating waste and improving efficiency. It will also require “a fundamental review of America’s missions, capabilities, and our role in a changing world,” said Obama. He said he intends to work with Gates and the Joint Chiefs on this review. “I will make specific decisions about spending after it’s complete,” he said. Obama did not indicate if the cuts would be spaced out evenly each year or staggered in some way. In any case, however, they would extend six years beyond a second Obama Presidential term. A White House fact sheet does state that the plan is to hold growth in the defense base budget—exclusive of contingency operations—below inflation. Further, these reductions would be over and above any savings generated by ramping down overseas contingency operations in places like Afghanistan and Iraq. (Obama’s speech) (White House blog entry and fact sheet)