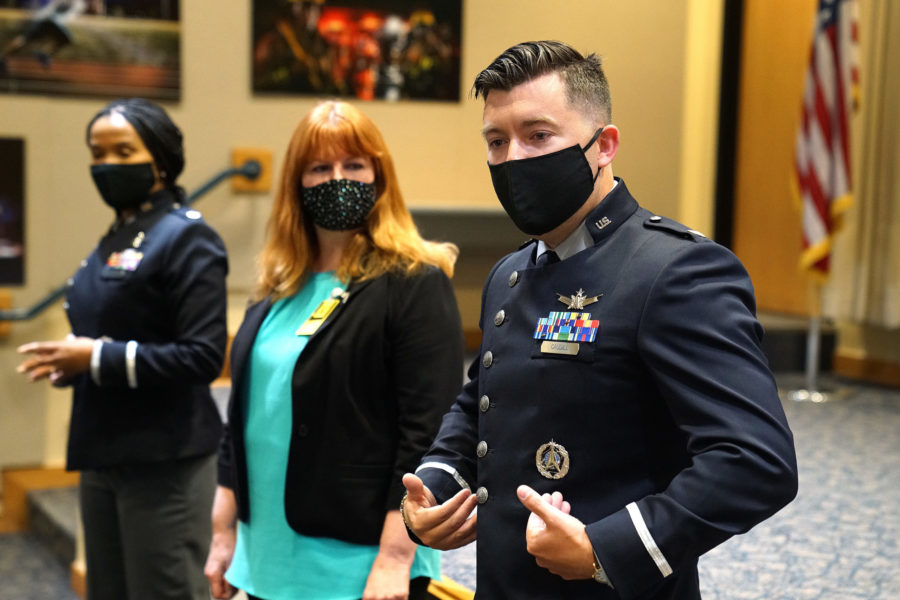 The Space Force’s service dress uniform proved to be a hit with Guardians—not to mention “off the charts” with younger Guardians—said Chief of Space Operations Gen. John W. “Jay” Raymond, and the service has “slapped the table on the final design.”

After its prototype’s unveiling at AFA’s Air Space & Cyber Conference in September 2021, the uniforms went “on the road … to pretty much every installation that had Guardians,” Raymond said in a one-on-one interview with Air Force Magazine at the Space Symposium in Colorado Springs, Colo., on April 6.

Guardians gave the uniform about an 81 percent favorable rating during the road show.

“If you get 81 percent on anything, it’s a home run,” Raymond said

The roadshows, along with some early feedback after the rollout, resulted in refinements to the original design to mitigate issues including the fit and the jacket’s collar. An enlisted Guardian wore the uniform at the symposium whose pants fit noticeably more slimly than the loose pants in the original prototype.

Raymond was still wearing his “spaced up” Air Force uniform, as he put it, quoting Chief Master Sergeant of the Space Force Roger A. Towberman. Raymond’s uniform bore buttons with the Space Force’s delta symbol for the first time this week, and he said Guardians will start to be able to wear the Space Force’s hexagonal nameplates while they wait for their new uniforms.

Next logisticians will take over, Raymond said—”the material gets wear tested and color tested, all of that.”

Then it will go into production, but Raymond acknowledged that supply chain holdups may lengthen that process.

“By law, everything that is on a uniform has to be made in the United States, and there are only two fabric companies in the United States that we can use,” he explained. “The supply chain issues due to COVID have really put that industry in a bit of a bind.

“So we’re accelerating as fast as we can,” Raymond said.

The uniform was the service’s top clothing priority, said Space Force Change Management Team Director Col. James Jenkins in an earlier statement about the uniform development, “as it’s very important to us culturally, to get out front and talk to Guardians.”

The uniform’s distinctive character incorporates symbols such as the Space Force’s delta logo, a standing collar on the dark blue—nearly black—jacket, and a row of six offset buttons representing the six U.S. armed services.

Guardians will continue to wear the Operation Camouflage Pattern uniform, or OCP, for their combat uniform.