Skip to content
An F-35 from the Royal Netherlands Air Force lands in Bulgaria in April 2022. Photo courtesy of Dutch Ministry of Defense
Expand Photo 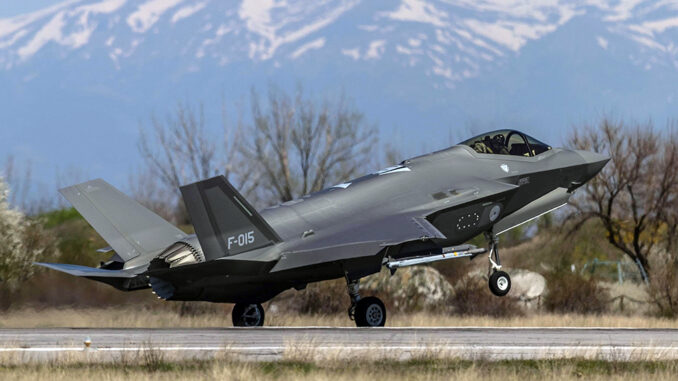 Germany has signed the letter of acceptance that formalizes its planned purchase of 35 new-build F-35s, its ministry of defense announced Dec. 14. The first eight aircraft will be delivered in 2026.

The sale brings the number of countries that have either formally signed up for the F-35 or signaled an intent to do so to 17, including the U.S.

Germany will likely purchase some weapons for the F-35 that that are not made by the U.S. but are or will be certified for the fighter, a Pentagon official said.

German defense minister Christine Lambrecht said the deal had been approved by the German parliament’s budget committee as part of a $13.85 billion package of military spending, which draws on a special $112 billion defense fund created after Russia’s unprovoked invasion of Ukraine.

In announcing the moves, Lambrecht said the $112 billion fund “will probably not be enough to close the gaps that emerged over the past years because we neglected procurement.”

The F-35s are intended to modernize the Luftwaffe, which is flying vintage Tornado strike and electronic warfare aircraft from the 1980s and ’90s. The F-35 will also keep Germany capable of delivering U.S. tactical nuclear weapons stored on German soil. The Tornado is expected to retire by the end of the decade.

Germany had previously selected a mix of F/A-18E/F fighter and EA-18 Growler electronic warfare aircraft but then backed off, saying the F-35 offered better integration and networking with other NATO countries that are also buying the F-35.

“We look forward to working with them to deliver the F-35 Air System to meet their national defense requirements,” Schmidt added—the other eight countries are original partners who contributed to development of the F-35.

Germany will also buy some additional Eurofighter Typhoons to supplement its existing fleet. The F-35s will be used for air superiority and strike while the Typhoons will be fitted for electronic warfare and escort.

The F-35 buy will not derail a planned Future Combat Air System fighter Germany plans to develop with France and other partners, and introduce in the 2040s, the German MOD said.

The original F-35 partners include Australia, Canada, Denmark, Italy, the Netherlands, Norway, the U.K., and the U.S. Turkey was also a developmental partner but was drummed out of the program over its insistence on buying Russian S-400 air defense systems, which the partners said would compromise the F-35’s stealth capabilities. Turkey has since begun a program to develop an indigenous fighter bearing a strong resemblance to the F-35.

Other FMS customers include Belgium, Finland, Israel, Japan, South Korea, Poland and Singapore. Switzerland is in the process of defining its buy, and Spain is strongly rumored to be planning to acquire the F-35 as well.