Shortcut to the Hollow Force 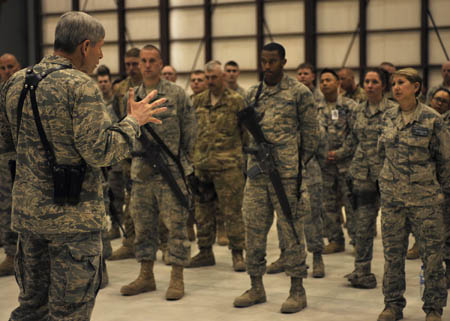 If Congress is adamant that the Air Force not take down as much force structure or people as proposed in the service’s Fiscal 2013 budget, lawmakers must come up with the cash to sustain the personnel and weapon systems or the Air Force will be hurt, said Chief of Staff Gen. Norton Schwartz Tuesday. Speaking at a Stimson Center event in Washington, D.C., Schwartz said he has told Congress, “If you give us force structure back, give us the money, too. Because the quickest way I know to a hollow force is to give us structure without money. Simple as that.” Schwartz said the Air Force recognizes that Congress gets to decide, but “we are not rolling over. We will make our best arguments” for the package as presented, “as we should.” However, if force structure is retained, Congress must also give the money for exercises, flying hours, and sustainment, he said. “‘Make it work’ is not a satisfactory solution,” asserted Schwartz during his May 1 talk.