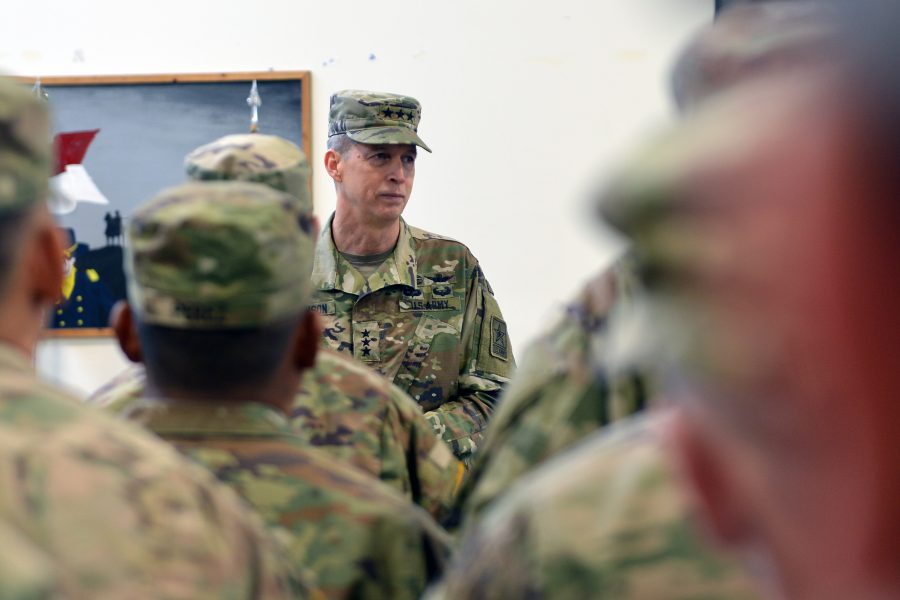 The prospective next head of the National Guard Bureau told the Senate this week he expects the new coronavirus pandemic and civil unrest will require the Guard to play a greater role in homeland security than in the past.

“Given the magnitude of recent domestic events, I anticipate a larger role for the National Guard in supporting civil authorities in the homeland; therefore, I foresee a potential increased role for me, if confirmed, in the interagency in planning for and reacting to events in the homeland,” Army Lt. Gen. Daniel Hokanson wrote to the Senate Armed Services Committee ahead of his June 18 confirmation hearing.

National Guardsmen have been a crucial piece of the national response to COVID-19, and were deployed to support local law enforcement during protests over systemic racism and police reform.

The Guard mobilized more than 120,000 Soldiers and Airmen at the beginning of June, with about 40,000 working on COVID-19 and close to 40,000 deployed to protests across the country, Hokanson said. Others were sent to help with Tropical Storm Cristobal as it clipped the southern U.S., to support the country’s southwest border, and to assist communities in the aftermath of earlier natural disasters. Another 29,000 were deployed overseas to work for combatant commanders around the world, while others handled air control and ballistic missile warning sites.

More than 453,000 Air and Army National Guard personnel serve in the organization.

The number of troops activated for the protests has since shrunk to less than 4,000, which Hokanson pointed to as a sign that the Guard can successfully defuse tense situations.

“We will always operate in accordance with laws and policies and, frankly, the expectations of our citizens,” he said.

Hokanson also expects the National Guard will be asked to work with more partner nations around the world to fend off Russian and Chinese influence and attacks. NGB already partners with 89 foreign countries for missions like domestic cyber defense.

“The [National Defense Strategy] and the operational plans that implement it clearly affirm that the homeland is no longer a sanctuary,” he added. “Military capabilities the National Guard can provide that are relevant to homeland defense … might include protection of critical infrastructure assuring DOD missions, cyber protection, and greater interoperability with domestic interagency partners during National Guard responses to domestic events.”

At the same time, the Guard faces a likely struggle to meet its recruitment goals for 2020. February 2020 marked one of the best months for recruiting in the past five years, Hokanson said, followed by a steady decline as the coronavirus spread across the country. In-person recruiting has taken a backseat to online meetings and social media, which are still hooking some new members.

“When [prospective recruits] have seen the great work that our Guardsmen have done with respect to COVID-19 and other events, [recruiters] feel like they’ll be able to make up a lot of the shortages,” Hokanson said. “It’ll be close for us to get there by the end of the year.”

Air National Guard boss Lt. Gen. Scott Rice noted June 10 the ANG will come up about 1,000 people short of its 107,500 manpower goal at the end of fiscal 2020 because retention is suffering. Hokanson said the bureau expects to hit its 90 percent retention goal this year.

If confirmed, Hokanson will earn a promotion to general and replace Air Force Gen. Joseph Lengyel, who assumed the post in August 2016. The head of the National Guard Bureau is also a member of the Joint Chiefs of Staff.

He is slated to take over the National Guard Bureau as it hopes to stand up a Space National Guard and expand its offensive and defensive cyber operations, on top of recurring missions like wildfire and pandemic response.

Hokanson currently runs the Army National Guard and previously served as the bureau’s vice chief as well as deputy commander of U.S. Northern Command and Oregon’s adjutant general. He is a decorated helicopter pilot with deployments to Iraq, Afghanistan, and Panama.